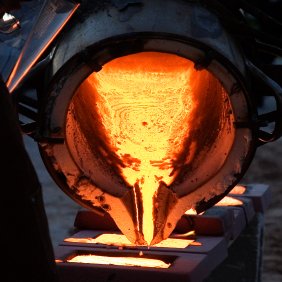 The cost to build a brand new chip-making plant is around $5 billion, and that’s just for starters. Then there’s the raw material, labor, taxes, R&D, waste-disposal, and many other expenses.

Oh, and the whole enterprise will be obsolete in less than five years, so you’ve got about 1300 business days to make back your $5 billion investment. That’s $3.8 million a day, every day, just to break even. It makes the cost of heroin addiction seem like a faint craving for salty snacks.

It’s no wonder that very few companies—or even countries—can afford to do it. And yet the chip business is thriving. We’re clearly not hurting for DRAMs, microprocessors, and A/D converters. They’re not even getting more expensive. How does that work?

The answer, Dear Reader, lies with third-party foundries. These are independent factories-for-hire that make batches of chips for anyone who can write a check. The big foundry players are TSMC (Taiwan Semiconductor Manufacturing Company), GlobalFoundries (formerly Chartered Semiconductor), UMC (United Microelectronics Corporation), and SMIC (Semiconductor Manufacturing International Corporation), plus about a dozen others scattered around the world. Your average foundry makes chips for 20–50 customers at once. They even serve competitors, making chips for Company A alongside chips for rival Company B. Foundries are the mercenaries of the chip-making world.

A Heartbreaking Work of Staggering Expense

Because of the rise of the foundries, very few “chip companies” actually make chips any more. IBM and Intel are the last big holdouts in the United States. Toshiba in Japan and Samsung in Korea make most of their own chips. But that’s about it. Big names like AMD, Freescale, and Infineon all stopped producing their own chips months ago. Texas Instruments and Renesas will outsource their leading-edge manufacturing soon. Biggish companies like Altera, nVidia, and Xilinx never made chips at all; they’ve always outsourced their silicon manufacturing.

The net result is that more and more chips are being made by fewer and fewer companies. And most of those companies are probably located halfway around the world from you. Is this a cause for concern or celebration?

On the one hand, outsourced silicon manufacturing makes good business sense and is a natural evolution of the semiconductor industry. There’s no real advantage to having a thousand different chip companies all cooking up their own chips in their own kitchens. That would be a wasteful duplication of effort. Besides, the question is moot; most chip companies can’t afford their own production facility, so it’s either outsource or die.

On the other hand, centralized manufacturing might reduce differentiation. If all of the world’s chips are being made in just a handful of foundries, aren’t we heading toward a silicon monoculture that lacks variety and diversity? The answer there is no. Not all foundries make their customers’ chips the same way—that’s how they compete. Some foundries emphasize low-power silicon processes, while some push high performance. Natural competitiveness keeps them from cloning one another.

On the third hand, the rise of the foundry business has enabled all sorts of startup companies that could never have existed otherwise. With a $5 billion ante, the semiconductor poker game wouldn’t have very many players. But now, two guys and a dog can start a chip company with little more than a bright idea, some EDA software, and a few million in venture capital. That wouldn’t happen without independent foundries willing to make small batches of chips.

Finally, the global nature of foundries makes some customers nervous. Three of the four biggest foundries are located in Taiwan or China. What if an earthquake or other natural disaster disrupts their supply? Or military action stops shipments? Or a trade embargo inflicts sky-high tariffs? Similar things happened in the 18th and 19th centuries; who’s to say it won’t happen again tomorrow?

GlobalFoundries is the exception. True to its name, it has facilities in Singapore, Germany, and the United States, so it can serve xenophobic or politically sensitive customers around the world. Its next fab will be in Abu Dhabi, giving the company a big presence in the Middle East and making it a high-tech Mecca, so to speak.

Foundry production doesn’t limit innovation or differentiation; it actually encourages it. Would your chip design be different—in any significant way—if you manufactured it yourself using some unusual process? Unless you’re working on a scientific research project, chances are it wouldn’t. But would your chip design get manufactured at all if you weren’t using a third-party foundry? Unless you’re working at IBM, Intel, or Toshiba, chances are it wouldn’t.

Automakers don’t make their own tires, refine their own oil, or develop their own electronics. Boeing buys its engines from Rolls-Royce and its airline seats from independent suppliers. That’s a normal supply chain. Economics 101 teaches us that specialization is the cornerstone of civilization and economic growth. There’s no reason chip companies should be any different.

So let us not mourn the decline of the vertically integrated semiconductor manufacturer. Let us instead praise the rise of the foundry and the innumerable little fabless startup companies they have enabled. Hail, horizontal integration! Hail, innovation! Hail, the submicron millennium!