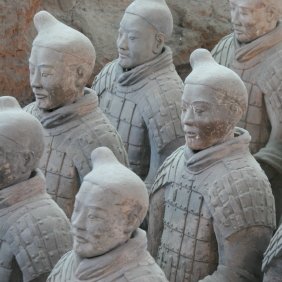 “Made in China” usually conjures up images of cheap Wal-Mart merchandise on the bargain rack. On the other hand, Chinese engineers have constructed some pretty amazing things over the ages. Chinese art, architecture, and engineering are on par with anyone else’s.

Godson (the name roughly translates as “the dog’s leftovers,” and it makes a lot more sense in Chinese culture) is being developed by the Chinese Academy of Sciences in Beijing. It’s part of a larger government-backed effort to stimulate home-grown technology. For now, Godson chips are used mostly in domestic Chinese computers. Later on, they hope to spin it off as an independent commercial venture, selling microprocessors on the open market.

Godson processors have been MIPS-compatible since the first one debuted in 2002. They were initially “MIPS-like” but not entirely binary compatible, since the Academy didn’t have a license from MIPS Technologies. Now that the group is fully licensed-up, they can design genuine MIPS processors that run most any MIPS-based code. The earlier Godson-1 and Godson-2 generations were pretty advanced for their time, and they found homes in Linux PCs across China. The new generation of Godson chips, predictably named Godson-3, is even more impressive.

In addition to being entirely MIPS-compatible, they’re also x86-compatible—sort of. Godson-3 includes about 200 instructions in addition to the standard MIPS ISA that help it accelerate x86 binary translation. The idea is not to duplicate all the features of an Intel Xeon or an AMD Athlon, but just to boost translation enough that running x86 code isn’t a miserable experience.

The chip does binary translation on the fly, somewhat like Transmeta’s Crusoe and Efficeon chips used to do (R.I.P.). Transmeta was trying to actually replace x86 processors; the Chinese just want to assist the MIPS processor core. Godson-3 won’t run x86 code nearly as fast as native MIPS code, but it’s nice to know that you could run x86 binaries if you had to.

And that’s just one of Godson-3’s many coprocessors. The chip also includes multiple 256-bit vector-processing units, PCI and PCI Express controllers, a DDR3 memory controller, HyperTransport interface, a programmable DMA controller, and more. Godson-3 comes in three flavors: the 3A has four 64-bit MIPS CPU cores, 3B has eight cores, and 3C has sixteen cores. All three versions include all the coprocessors and run at a swift 1.0 GHz.

The HyperTransport interface is particularly interesting if you’re building a massively multiprocessor system. It allows you to connect each Godson-3 chip to four neighbors in a north, south, east, west kind of mesh. They won’t automatically communicate with each other—that’s still the programmer’s task—but at least the hardware is in place.

For embedded designers, there’s the Godson-2H, a watered-down version for Linux PCs and similar devices. The 2H is an all-in-one chip, with just a single Godson CPU core but with a graphics controller, Ethernet, UARTs, AC97 audio, SATA, and USB ports built in. As such, it’s a bit like AMD’s upcoming “Ontario” chip, integrating the processor, the graphics, and most of the in/out stuff you need for a complete system. Just add memory and software.

Of course, Ontario will have the advantage (if you see it that way) of running PC software, whereas Godson-2H is a MIPS machine. That’s fine for Linux or just about any other operating system, but it pretty much leaves out the Windows market. Like its big brothers, Godson-2H has the extensive x86 extensions, so x86 software isn’t out of the question. It’ll just be slow.

Aiming for the Stars

Meanwhile, back at the high end, the Chinese Academy of Sciences’ ultimate goal is to create the world’s fastest computer with a machine based on clusters of Godson-3C chips. It’ll have some stiff competition: IBM has held the world’s-fastest-computer record for many years with its Deep Blue: the Blue Gene/L machines, among others. Current bragging rights belong to Cray’s Jaguar-XT5-HE, based on AMD Operation chips. There are currently 24 Chinese systems in the Top 500 List (the same number that Germany has), but none are based on Godson chips—so far.

Godson’s rapid progress over the past few years suggests they might have a shot. Godson-3C is certainly an ambitious design, and it should deliver impressive performance when it starts production, which is scheduled for 2012. In the meantime, hordes of Chinese schoolchildren can look forward to their own Godson-based Linux PC. That wouldn’t be too different than the Apple II many of us learned on, and look how that turned out.