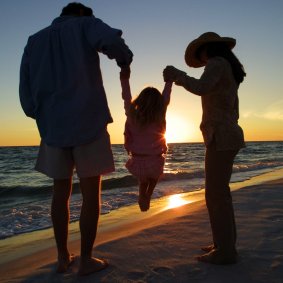 “Your Mother and I are planning to be married…”

He looks down quickly, afraid to make eye contact.  Not wanting to avoid the subject, but not wanting to show his shock and uncertainty, he studies his shoelaces instead.  The sneakers are old and worn.  Maybe this could mean some new ones?  He feels his hands trembling, so he tries to hide the fear by slipping them under his thighs.

“Do you have any questions?”

He replays the announcement he just heard again in his head. He gathers the courage to raise his eyes again. “Uh, I guess.  Do you like sports?”

It was not quite the right question.  He had really wanted to ask “Are you going to be the type of step-parent that comes and cheers for me at my soccer games, or the kind that may end up locking me in the basement?”

“Yes, I’m a big basketball fan.  Would you like to go to games sometimes?”

Since the question wasn’t quite right, the answer wasn’t quite satisfying.  Encouraging, yes, but not quite the “Actually, I’m a huge fan of junior soccer” he may have been imagining when he asked.  And even that wouldn’t have told him what he really wanted to know.

“Will Microsemi become an FPGA company?”

It was a conference call so I didn’t have to stare down at my shoes.  I was talking with Russel Garcia – Executive VP of Sales and Marketing at Microsemi and Fares Mubarak – Senior VP of Engineering and Marketing at Actel about the just-announced acquisition of Actel by Microsemi.  While not exactly our new step-parents, the implications for the average FPGA designer are similar.  What we really want to know is – Will Microsemi become the newest viable supplier of programmable logic technology, or will Actel become the latest casualty of consolidation in the FPGA market?

Actel has been a jewel in the FPGA space – with their antifuse- and flash-based programmable logic technologies and their mixed analog/digital FPGAs.  Because of these highly-differentiated products, they stand alone as the only viable supplier for a specific range of programmable logic applications in defense, medical, industrial, commercial, and automotive.  Since Actel has followed their own separate technology path, Xilinx and Altera – the gorilla and the chimp in the FPGA space respectively – have largely left them alone.  For radiation-hardened FPGAs, super-low-power non-volatile programmable logic, and mixed-signal FPGAs with microcontrollers, Actel pretty much owns the market.

“No, Microsemi will not become an FPGA company,” replies Microsemi’s Garcia.

That answer wasn’t as scary as it seemed.  Garcia went on to explain that Microsemi was doing the acquisition to raise their level of integration and abstraction – moving from simple component supplier to platform and solution supplier.  Where Microsemi has always been a highly-respected source of analog and mixed-signal components – primarily to the high-reliability and mil/aero markets – they see Actel as a path to supplying more complete solutions – moving them up the value chain.  Mubarak gave the Actel perspective, which most of us in the FPGA arena probably already know – that Actel’s platforms provide a high degree of integration and flexibility due to their programmability, and that their technology makes them unique in the market with superior performance in areas like power consumption, reliability, security, and non-volatility.

“Will Microsemi keep the Actel brand?”

“We like to have everyone wearing the same uniform,” replies Garcia (see, maybe they do like sports), “but we see a lot of value in Actel’s product brands like Igloo and SmartFusion.”

Admittedly, asking some of these things today is like showing up at the engagement party with a list of questions about who will teach the kids to drive, whether macaroni will still be served on Wednesday, and at what age the kids will be allowed their own checking accounts.

We interpret the answer to mean, however, that we might someday soon see product names like “Microsemi ProASIC” or “Microsemi SmartFusion” – which we could get used to eventually.  However Microsemi doesn’t look like they’re much into the product-line branding game yet.  Their line-level brands are mostly things like “LX1732” which, as anyone would know, is a compact, high efficiency, step-up DC-DC boost regulator from Microsemi – which could be used for Lithium-Ion battery boosting, NOT to be confused with the “LMT1732” which is a complete constant-current/constant-voltage linear charge controller for lithium-ion (Li-Ion) batteries from Linear Technology Corp.  Branding?  Nah, we don’t need no stinkin’ branding.  We got part numbers.  Our customers are engineers.

The most critical item in the short term for us FPGA folk is whether the new parent understands the requirements for proper care and feeding of FPGA customers.  We don’t just order a bunch of parts from a line card, solder them to our board, add a few digits to our BOM, and walk away satisfied.  Nossir.  We pick an FPGA for our design –  then we need support, tools, IP, support, reference designs, more support, development boards, more support, and then some help from our AE when the last synthesis and place-and-route run suddenly fails to meet timing, and then – some really good support.  Moving up the value chain entails moving up the support chain as well.  If Microsemi is smart enough to retain and smoothly integrate the knowledgeable and seasoned AE and support teams Actel has already established, they’ll be way ahead of the game.  If they decide at some point in the future that operational efficiency can be improved by supporting all products through a consistent and uniform process with a single team, we will know that the accountants have taken over and the FPGA days are numbered.  For now, it sounds like Microsemi “gets it” and understands and values the experience and expertise of Actel’s support resources.  It’s a good sign.

One possible advantage of being part of a bigger family is the potential for more power in Actel’s war chest.  Being competitive in programmable logic – even with highly-differentiated technologies like Actel’s flash and antifuse, requires staying fairly current on semiconductor process technology.  Actel, being one of the smaller FPGA suppliers, has always seemed to move a bit slower – partly, at least, from being conservative with the enormous cash resources required to move to new semiconductor process nodes.  While it doesn’t appear that Microsemi brings any direct help to this party (analog and mixed-signal parts typically don’t push the envelope on process technology, and Microsemi has their own fabs for much of their product line), being part of a bigger family could give the Actel projects more of the resources (by which we mean mind-bogglingly enormous piles of cash) required to remain competitive on the digital side of the programmable game.

There is clearly a big advantage for customers on the supply-chain side.  The two companies already have many of their top-tier customers in common – and even a number of their distributors.  Purchasing from a single supplier instead of two will result in efficiencies for many customers, and the combined forces of Microsemi and Actel will have more leverage with the distribution channels than either enjoys individually.  For the future, it doesn’t take much imagination to come up with ideas for chips or chipsets that take advantage of the combined capabilities and strengths of the two companies.  In that best-case scenario, we could all enjoy some truly innovative platforms.

A final question mark remains on the target markets for the new combo.  Over the past several years, Actel has been diversifying beyond their traditional military/aerospace/high-rel market into higher-volume markets like consumer, automotive, and industrial – taking advantage of their low-power, high-security programmables message.  While their revenues have not yet seen much of the benefit of that diversification, their design-start trends would make us believe it is coming.  Microsemi, on the other hand, has always appeared to be satisfied with a focus on military, aerospace, and high-rel markets.  Whether Microsemi will expand their vertical market focus, or whether the current Actel offerings will abandon some of those green fields for the safety of the proven will be interesting to watch.

When the Microsemi/Actel announcement came over the wire (OK, to be honest, I saw it mentioned on facebook before I caught wind of any of the press releases, finance group postings, carrier pigeons, or smoke signals that were designed to send the announcement through more traditional channels), the immediate chatter I heard in the analyst and editor community could be summarized as “WTF?”  By the end of the interview, however, it was all starting to make some sense to me.  Both companies have had their greatest strengths in supplying semiconductors to the mil/aero and high-reliability markets.  Both companies have similar cultures.  And, John East, long-time CEO of Actel, is slated to retire.  This is not a shotgun wedding; it is a marriage of convenience.  We, the step-children on the FPGA side of the new family, need to dress up in our sharpest suits, show up on time for the ceremony, smile, and hope things turn out for the best.