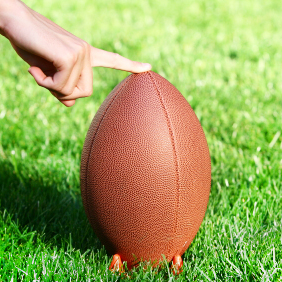 The “Peanuts” comic strip made the situation iconic.  Lucy would place the tip of the football on the ground, holding it upright with one finger (American-style football in this case – sorry international audience – bear with us, this is how one player holds the ball while another does a stationary-type of kick.) Charlie Brown is skeptical.  Lucy has tricked him with this before, waiting until the last instant, then yanking the ball away, causing him to fall head over heels in a nasty tumble.  She implores him to start his run.  This time, it will be different.  This time, she isn’t trying to trick him.  This time, it’s for real.

He seems to ponder the countless previous attempts with their painful outcomes and the accompanying humiliation.  He understands the risk.  He knows he cannot trust her.  Nonetheless, the ball is just there, waiting for him, precisely poised for that perfect punt (note to American football fans:  OK, it’s not actually a punt.  We took some rule leeway for the sake of alliteration).  Something seems different in her eyes this time too.  Maybe he’s fooling himself, but he feels like she’s sorry for all those other times.  She wants to make amends.  She shares his vision for the perfect kick, and the joy they’ll feel together – as a team – when the ball is sailing miraculously toward its destination.  Charlie Brown starts his run toward the ball – stern, determined, committed…  He has visualized the outcome he wants, and he pours his entire being into the motion of the run-up and kick.

The physics of his movement have already determined the outcome.  Beyond the inertia, his emotional commitment is also past the point of no return.  In his mind, the ball is already sailing through the air toward the goal, even as his kicking foot swings decisively forward carrying the full energy of his approach into… Nothing.

At the last possible instant, Lucy swipes the ball away with her free hand, laughing hysterically.

For Charlie Brown, it is too late.

His balance fails – the enormous energy of his kick stays with his body instead of transferring to the ball – spinning his entire frame upside-down, slamming his head into the dirt and starting an uncontrolled tumble whose echoes will be felt in dozens of minor aches, pains, scrapes, and scratches over the coming week.  More than the injuries, however, his soul is bruised.  He fell for it again.  He tried to start a business supplying key technology for the FPGA ecosystem, only to have the FPGA companies kill his value – and his business – by offering a weak substitute for next-to-nothing.

FPGAs have been one of the fastest-growing segments of the semiconductor industry for about two decades now.  Estimates for the number of designers actively involved in FPGA design range from about 100,000 to over 500,000 engineers worldwide.  The market for FPGAs is estimated to be around $4 billion USD this year, an almost 30% increase from last year.  In most areas of high technology, this kind of interest and growth would be accompanied by a robust ecosystem of competitive, profitable companies sharing in the bounty and contributing to the expansion of the technology into new areas, fueling a secondary wave of even more aggressive growth.

For most of those two decades, the largest two FPGA companies have played “Lucy” to the ecosystem’s “Charlie Brown”.  “Come join our partner program,” they say.  “Let’s do some joint marketing.”  Enthusiastic entrepreneurs and billion-dollar corporations line up for the kick.  They form development teams and create key technology to enable and expand FPGA design.  They forge innovative IP, craft clever software tools, and crank out development and prototyping boards – all with the intent of capitalizing on the expansive design community, the double-digit market growth, and the incredible flexibility and utility offered by programmable logic.  They train support engineers and hire marketing teams.  They are ready to ride the FPGA train straight to a sustainable, profitable, high-growth business.

The FPGA companies hold their finger on the ball, unwavering.  There is a reassuring confidence in their eyes.  In fact, they believe in the partners so much, they sometimes invest in them – even offering a board member or two to help the fledgling business find their way in the big, bad, scary world of high-tech startups.  It’s a generous and helpful offer.  Who could resist?

The partners start their run toward the ball – sending engineers and prototypes on-site with the FPGA vendors – making sure the partnerships are strong and well-oiled, and that every detail of the multi-company solution looks as if it were hewn from a solid rock of monolithic vision.  They are emotionally committed.  They have already envisioned the outcome – customers lining up at their booths at trade shows just to get a peek at the latest enhancements to their amazing FPGA design tools, their innovative and robust IP cores, their clever and useful FPGA boards, modules, and boxes.  The FPGA companies are in that dream too – holding their hand as, together, they watch the ball sail away toward the goal – increased revenues, a large installed base, happy and successful customers.

But, the guy on the board of directors isn’t happy with the startup’s plans to make their solution multi-vendor.  “Why not,” he suggests, “focus all the energy at first on creating a really good solution for one vendor – putting all the wood behind one arrow, so to speak.”

This makes sense to the startup.  After all, the secret to success for a new business is focus, focus, focus.

“Also,” the board member suggests, “We might want to delay ramping up the sales and marketing teams.  That’s a lot of budget we could be using to expedite development of our technology, and we can get a lot of sales and marketing support from our partners, the FPGA companies.  I have good contacts there.”

“How generous,” thinks the startup management.  Wow, these FPGA companies are cool.  They give us money, advice, and board members, and now sales and marketing support.”  With new enthusiasm, they bound toward the ball.  Things are going Great!

Across town, at the startup’s main competitor, things aren’t so rosy.  Their product is almost ready, but their venture capital has dried up and they’re running on fumes.  They don’t have the cash to make payroll, let alone do a real product launch with PR, advertising and all that stuff.  Executives are strapping on golden parachutes and engineers are inviting scores of new people to join their LinkedIn networks.  The solitary marketing dude has decided to start a blog and is spending more time at home than at work – driving his twitter follower count into the upper double-digits.  Their product was coming in a distant second in a two-horse race, and the handwriting is on the wall.  Their only hope is…

Oh, look at this, an acquisition offer from one of the two big FPGA companies!  Sure, it’s pennies on the dollar of venture investment, and the VC guys will go home with one in the “loss” column, but the technology will at least live on, and most of the engineers will become employees of the big FPGA outfit.  What’s more, their tool will become a part of the FPGA vendor’s suite and may be used by tens of thousands of engineers.  You just can’t put a price on that kind of reward.  Their product may have been the weakest, but they will have a small victory in the end.  It will live on forever (in the FPGA world “forever” is two years, by the way) in the FPGA vendor’s tool suite.

Back across town at our original startup, it’s time to break out the champagne.  They have won the war.  Their main competitor has gone down, and now there is a big fat green field of money, just waiting for them to stroll over and harvest it.  Time to hire all those sales and marketing people and get started, right?

Their FPGA-company partner is less enthusiastic.  Now, the OTHER FPGA company is offering this capability for free as part of their tool suite.  We can’t have that now, can we?  It would give an advantage to the bad guys.  They start to talk to the startup about an OEM deal that will allow them to put a “Lite” version of the better tool in their default tool suite – offsetting the other FPGA company’s advantage.  Just in case the OEM thing doesn’t work out – the FPGA company makes a “Plan B” and dispatches a small team to develop a “me too” feature that kinda-sorta does what the startup’s product does.  The FPGA company’s bases are now covered.

The board member suggests to his startup that now might not be a good time to ramp up all that marketing and sales.  The “other” FPGA company (the one they don’t even support yet) is now offering a competitive product essentially for free.  They might want to consider taking the OEM deal, and then working on a “Pro” version of their product to up-sell all those thousands of OEM customers.  There’s time for marketing and sales later, when they have a big OEM installed base from which they’ll doubtless get rich selling “Pro” upgrades.

The startup likes the OEM idea.  It will give them a small, steady revenue stream, and that will buy them some time to finish out the OEM product and then really make waves with the “Pro” version.  They settle into a nice comfortable development rhythm.

The startup is now doomed.  Their OEM revenues have dropped to a trickle, and their upgradable customer base has dwindled as well.  They are now competing directly with their FPGA-company partner who is giving away one level of capability for free, and the “Lite” version of their own tool for a pittance more.  Now, they have to sell their “Pro” tool against both their own “Lite” version and the “free” tools that are now offered by both of the major FPGA companies.

As they tumble to the ground, they can’t help feeling like they’ve seen this scenario somewhere before.  Perhaps in an old comic strip…