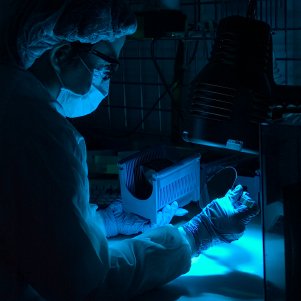 “Real men have fabs,” said AMD’s president/CEO Jerry Sanders many years ago, meaning proper chip companies build their own chips in-house. By Jerry’s reckoning, there aren’t many real men left in the business anymore, including his old company AMD. More and more, chip companies are outsourcing their chip production.

Modern-day outsourcing is a paradox of epic proportions. Even as chip sales increase, they’re manufactured by fewer and fewer companies. Except for Intel and Samsung, plus a few other hold-outs, most “chip-making” companies don’t actually make any chips. Big names such as Freescale, Microchip, Texas Instruments, Xilinx, AMD, Broadcom, and others outsource most or all of their manufacturing.

Why all the outsourcing? As usual, the reason is cost. Silicon, copper, even gold—these things are cheap. The raw ingredients for chip making cost next to nothing. But the machines—the capital equipment—is staggeringly expensive. We’re talking government space-program levels of money. A brand new chip-making factory (called a fab) costs about $4 billion dollars to build, and it’ll be obsolete in three to four years. Even a quick back-of-the-napkin analysis shows you’d be spending $3 million per day just to pay off the equipment, never mind the materials, labor, engineering, marketing, and so on. That’s a serious money pit.

Weirdly, the better and more efficient these fabs get, the harder it is to pay them off. A new fab can produce more chips than an old fab, which is normally a good thing, right? But if you can’t sell that many chips—if your production supply exceeds your market demand—you’re stuck paying for excess fab capacity, which is depreciating at $3 million a day.

These perverse economics led smaller chip companies to start sharing their fabs, until finally we’re in a situation where virtually all chip companies share a limited number of fabs. And that brings us to Global Foundries.

GloFo for the Masses

AMD, like most companies, figured out that it can’t afford to own and maintain its own fabs, so the company pursued an “asset light” strategy, selling off its old equipment and delaying upgrades on the new stuff. Eventually, AMD spun off all of its manufacturing into a separate company called Global Foundries. GloFo then merged itself with Chartered Semiconductor, an independent foundry in Singapore, and today GloFo is about 80% Chartered’s equipment and 20% AMD’s. The company has fabs in the United States, Singapore, and Germany. True to its name, Global Foundries is one of the few independent foundries with fabs on more than one continent.

GloFo is the second-largest foundry in the world, after Taiwan Semiconductor Manufacturing Company (TSMC) and ahead of United Microelectronics Corporation (UMC), also of Taiwan. Its newest fab is being built in upstate New York, where it’s one of the largest construction sites in the state. Called Fab 8, it’s due to open in about two years. Fab 1, in Dresden Germany, is undergoing expansion to add another 110,000 square feet of manufacturing space.

The economics of the foundry business are pretty straightforward: you spread the awesome expenses across several customers, and everyone benefits. GloFo can spend billions of dollars on R&D (and it does), and every GloFo customer reaps the benefits when they have their chips made there. Instead of a single company developing its own 28nm process technology and then building its own $4 billion fab, it can just waltz down to GloFo (or TSMC, or UMC, etc.) and say, “I’d like a few thousand of these, please.”

The cost sharing goes beyond just GloFo, too. The company is part of a so-called Joint Development Alliance (JDA), a seven-company group of chip makers including IBM, Infineon, Toshiba, and others. The seven work collectively on new R&D, sharing their research and splitting the costs. Once their research is complete, they go back to being competitors, occasionally angling for the same foundry business from fabless customers. It’s another sign of the times, and a reminder of the colossal cost of developing semiconductor technology on your own.

Pushed along by its largest customer, AMD, Global Foundries manages to stay ahead of the curve in terms of manufacturing technology. TSMC and UMC tend to offer the cheapest foundry services; GloFo prides itself on offering the most advanced. That’s partly because it’s sharing the R&D with six JDA partners and partly because AMD needs leading-edge technology for its PC processors. After Intel and IBM, GloFo probably has the most advanced semiconductor technology on the planet. Not bad for an outsourced manufacturing facility.

There are very few “chip makers” making chips anymore. The fabless, or asset light, business model is now the rule, not the exception. On one hand, that’s made silicon more homogeneous. Fabless companies share the available pool of manufacturing resources, and even competing foundries cooperate with each other on process development. On the other hand, it’s made first-rate semiconductor manufacturing affordable for almost everyone. Even underfunded startup companies now have access to world-class manufacturing.

We’re still a long way from having a single, centralized manufacturing center, but we are heading in that direction. For most chips, silicon technology isn’t really a differentiator, so it’s okay if they’re all made the same way. There’s enough competition between TSMC, GloFo, UMC, and the others to avoid monopolistic concerns, and there are enough differences in their technologies to make for a lively market. So now the “real men” can spend their time designing and marketing instead of building.