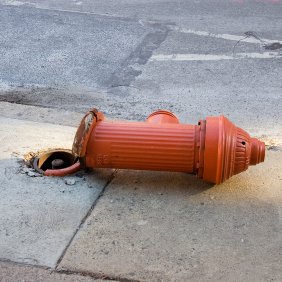 So you’re doing a design of this clever, dashy little inner-city small-but-fast car. And, like everyone else, you’re not doing it all 100% by yourself. You’ve invented the wheel enough times to where the thrill is pretty much gone; you’re going to buy some wheels instead and focus your efforts, maybe, on infotainment instead. You know, nothing takes the boredom out of downtown traffic like a video and the ability to update your Facebook page with one hand while you drive with the other and talk on your phone with the other.

And there’s plenty of other stuff you don’t want to redo yet again. So you unearth some of your old moldy dashboard designs. And you pull in some reclining seat IP. And you buy some rear-view-mirror verification models. And there’s this project that someone else at your company did last year where they came up with a high-performance wheel that was really awesome, so you re-use that (after the guy managed to dig up the old design files).

Everything goes along fine. And you find a bug in the seat IP, and you fix it. And that wheel from your buddy wasn’t going to be used in a crappy neighborhood – yours will be, so you want to modify it to add a locking lug nut. And that works, and you’re pretty much doing great.

Oh, wait, you don’t really care. Your project is working, and whether hers is like yours or different won’t affect your review one whit at the end of the year, so, yeah, whatever.

You’re managing a group of design teams that are designing specialty vehicles for different environments. Each of them is pulling design chunks from here and there and wherever, and a number of modules are being used in more than one car. And they’re modifying them to create variants that might be useful later on, and they’re fixing bugs that others may run into later and have to fix themselves. Lots of potential time being wasted. Lots of potential confusion. Lots of potential for things to go wrong.

There, that’s better; that really does sound like a problem. Because your review won’t shine quite as brightly if the projects under your purview are late or buggy or simply inefficiently done.

The problem is, the bigger the company, the harder it is to keep all of this straight. Yeah, you may have your design groups humming along smoothly, but what about your boss? She wants a good review too, and if her groups are disorganized (well, except for you), then she’s going to look disorganized. Not a good thing to do to your boss. Or… for your peers to do.

This is, unfortunately, one of those things that ends up having to be considered at the enterprise level. Because everyone has a boss. Well, until you get to the BoD. And when was the last time you saw any of them do a design or manage a project? But they can bring the hammer down; that’s something they’re good at. So at a big company, you pretty much have to go up pretty high in order to get to the point where all design activity is reporting to one person. It might even be the CEO if you have multiple business lines.

OK, so now say you’re the poor schlub that just got tasked with making a pesky problem simply go away. How are you going to handle this?

OK, so I guess you got me at this point – it’s called ProjectIC, not ProjectCAR. So those of you reading this to see if it will help you with your slipping transmission issues, you can go do something else like check to see if some gaskets are leaking or something.

Those of you doing IC design – say, for that nifty infotainment system that will cause someone to veer off and hit a streetlight, which will be videotaped by one of the Big Brother eyes-in-the-sky that know all and see all, and which will be posted anonymously on YouTube for all to see, indirectly making you a famous guy except that no one will ever know your name or face – this does apply to you.

The idea behind ProjectIC is that it manages the meta-information about all your projects. For each project, it catalogs a bill of materials. And it can cross-catalog the various projects, keeping track of who’s using what IP or legacy block or TLM model. If bugs are fixed, those can be pushed to other users of the same IP.

The blocks your team designs can also be “published” in a company catalog, essentially making available an internal library of IP blocks. And those blocks, as well as purchased blocks, can be tagged with the appropriate rights and obligations information to ensure that things get used only in ways that keep the lawyers away.

Basically, you’ve got a company-wide database and the ability to manage the design data for all of the projects.

Now, like other things we’ve talked about on these pages, we have a situation where each company may want to do things a different way. The choice is typically to make something very customizable – requiring customization work – or trying to force a one-size solution. In this case, you build the structure yourself, so the way your projects and files are structured can be incorporated into the system.

So, if this works as promised, you can correlate the fact that both the suburban rambler and the urban sprite are using the same image-filtering IP, and, if a bug is found in one project, it can be fixed in the other. Which means you may never need to figure out whether the fact that the rambler ran over Mary Jane Stevenson’s roses and the sprite KOed a fire hydrant, both as a result of an unexpected NSFW image popping onto the monitor, was ultimately due to the same bug in both cars.