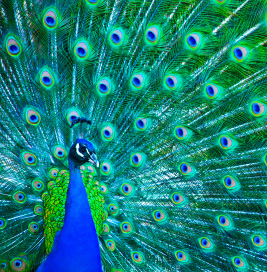 Showing off in San Jose

I love successful trade shows. I enjoy the buzz of people meeting and doing business, the chance to catch up on the news and the gossip, and the chance to take the temperature of the industry. Used properly, a trade show is part of an engineer’s professional development, not a boondoggle.

One thing that I use as a gauge is who is exhibiting and where they are in the hall, as well as what themes they are pushing. At US shows there is a clear class divide between those with custom-built booths and those in the pipe-and-drape aisles.

The biggest custom booths have presentation theatres, meeting rooms, multiple demos, and a large staff. They represent a massive investment, both on the booth and in staff time. Staff time is needed beforehand in preparing for the event, rehearsing the presentations, setting up meetings, and a hundred and one other things. And staff time is needed at the show, to meet and talk to visitors (and the press), to give the presentations and demonstrations, and to keep the whole thing running smoothly. Added to this is the cost of travel, accommodation, and, usually, a social event as well.

The pipe-and-drape area is a framework of pipes with hanging drapes (curtains) to create ten-foot by ten-foot or ten-foot by twenty-foot areas. The exhibitor rolls in a pop-up back wall, turns the carrying case into a podium, and is ready to meet visitors. The booth can be serviced with a minimum of two staff members (unless you are prepared to leave it empty while taking a comfort break). For a small company it can be a very effective way of maintaining a presence, particularly if they put in the effort to set up meetings in advance rather than just waiting for the visitors to walk onto the stand. For larger companies, it is a cheap way to keep a toe in the water.

Those in the Nob Hill area of the custom builds are showing a significant commitment to the embedded industry and, as might be expected, this year included software companies like Green Hills and Express Logic and chip companies like NXP and Atmel. Both ARM and Microsoft had large stands to include their communities and users. National Instruments had a great product demo of a car being controlled from an iPhone. Sliders on the phone controlled the brakes and gas, while the iPhone orientation controlled the steering. Part of a series of fun projects by Waterloo Labs, self-described as, “a group of engineers at National Instruments and other nerds in Austin, TX, building awesome DIY projects and sharing them with you on YouTube.” I know – you’ve already seen it on YouTube, but actually seeing a spanner (OK, a wrench) mash down on the gas pedal under thumb control was fun.

A growing trend is the use of FPGAs in embedded systems, and both Xilinx and Actel had significant presence in that arena. There seems to be a feeling that FPGAs are too slow, power-hungry and expensive for many embedded applications – Actel and Xilinx are anxious to prove that they aren’t, with parts starting at well under $10.00. Also, we are seeing the growth of what we might call programmable SoCs.

Actel’s SmartFusion, announced a few weeks ago, combines an ARM Cortex-M3 with programmable fabric and analog circuitry, and, at ESC, it was being demonstrated in motor control applications. SmartFusion devices are available now, and web sites show a 100 up distributor list price starting at $42.00. Not startlingly cheap, but there is a lot of functionality on the chip, which could lead to a significant reduction in the components needed for any specific application.

Xilinx was pre-announcing what they are calling a new family of devices that goes beyond the FPGA. The Extensible Programming Platform (EPP) has a hardwired area with a top-end twin-core ARM Cortex-A9M processor unit with a NEON multimedia processor, memory interfacing and peripherals, and a programmable fabric. The two areas are like today’s standard approach of a microprocessor and an FPGA, only instead of communicating across an FPGA, the two are connected by 2,500 wires, proving ample capacity for an AMBA-AXI bus and other communications protocols. Full details will not be generally available until next year, but Xilinx was stressing that this approach recognises the increasingly dominant role of software in systems and is pushing EPPs as a way to first define the system in software and then carry out software and hardware design in parallel.

Since we are talking about processors, while ARM and Microchip had big booths, Intel, a company with the avowed aim of taking over the embedded world, wasn’t there at all, and MIPs was present only in the Multi-Core Expo area.

Multi-Core Expo was a pipe-and-drape area, effectively co-located with the ESC, sponsored by the Multicore Association and EMBC (the Embedded Microprocessor Benchmark Consortium) to highlight multi-core processing developments and support a day of multi-core technical presentations. Some big players, like IP company Imagination, were present only in this area. Intel subsidiary Wind River, that used to be a very big player in the Nob Hill area, was present only in the Multi-Core Expo.

One of the things that I really like is finding companies who have developed neat solutions to real-world problems. At ESC, Amulet Technologies was showing something that really appealed. The problem the company is solving is adding interfacing to an existing eight-bit application. Say you have a nice application running happily on an eight-bit processor, like the controller for ice and chilled water on a refrigerator, and then marketing wants to add a really stylish human-machine interface, “Something like an iPhone”. Touch-sensitive screens are around and not desperately expensive, but developing a good looking GUI and controlling it is not as easy as Apple makes it look. Normally you would use the display drivers bundled in your operating system for the processing work, but the eight-bit application doesn’t have an OS. To re-implement the application on a bigger processor just to get drivers is going to be expensive and, more importantly, time consuming. Amulet has come up with two graphical operating system chips (one for colour and the other for monochrome). These handle all the new processing, drive the screen, and communicate with the existing application. This is fine at one level, but where they have really scored is in the development environment, GEMstudio. This is a drag-and-drop environment for creating pages for the GUI and for creating the underlying software. A graphic designer can create individual images and icons and create the pages, and a software person can build the program. The operating system engine within the chip can run on a PC, so development and debugging can be completed before loading the program and the graphics into the run-time environment. Amulet also has a wide range of modules, boards, and support tools, and some interesting announcements in the pipeline.

Further to my article on takeovers and mergers, we have begun to see the first fall-out from the Intel purchase of Wind River. Freescale announced that it had signed partnership agreements with Enea, Green Hills and Mentor. These are not just  “we will be nice to each other”, but are real, in-depth partnerships working together to make sure that tools are available as new products emerge. Enea says that there are meetings and conference calls every day as the relationship is developing.

The other themes? Multi-core wasn’t confined to the Multi-Core Expo. Most of the development tools suppliers, compiler suppliers, and OS companies are continuing to work on supporting the different flavours of multi-core and multi-processor systems that are emerging, although there are still serious concerns about debugging and verification.

For debugging generally, ARM has extended CoreSight by adding options to view software and hardware activities in real time and to use system memory to store trace information. When these are implemented in ARM- based design, developers have a lot more information to work with, and many debug tool vendors are providing tools to work with data from CoreSight.

One thing that keeps popping up is Java for real-time. Without getting into religious wars about languages, it does seem that universities are using Java as a teaching language, meaning there will be a lot of people in the job market who know Java. One of the weaknesses in real-time Java is garbage collection, (tidying up un-used memory) and in the latest release of PERC Ultra SMP (Java for multi-core) Aonix (now part of Atego) has implemented concurrent garbage collection. While some threads run Java, others carry out the garbage collection.

So how was the show, Mrs Lincoln? It is unfair to compare any embedded event to embedded world in Nuremberg. But even by that tough benchmark, ESC Silicon Valley was in good shape. Vendors are seeing projects previously on hold coming on-stream: tools vendors in particular are seeing an interesting up-tick as organisations used the down-turn to look at improving their development process. And, presumably, the people in deep conversation on the booths, attending the conference sessions and keynotes, and generally moving around the hall were embedded systems developers. So even if you can’t define embedded systems, and a panel in the exhibition theatre struggled over reaching such a definition, the embedded systems industry appears to be in hearty shape.