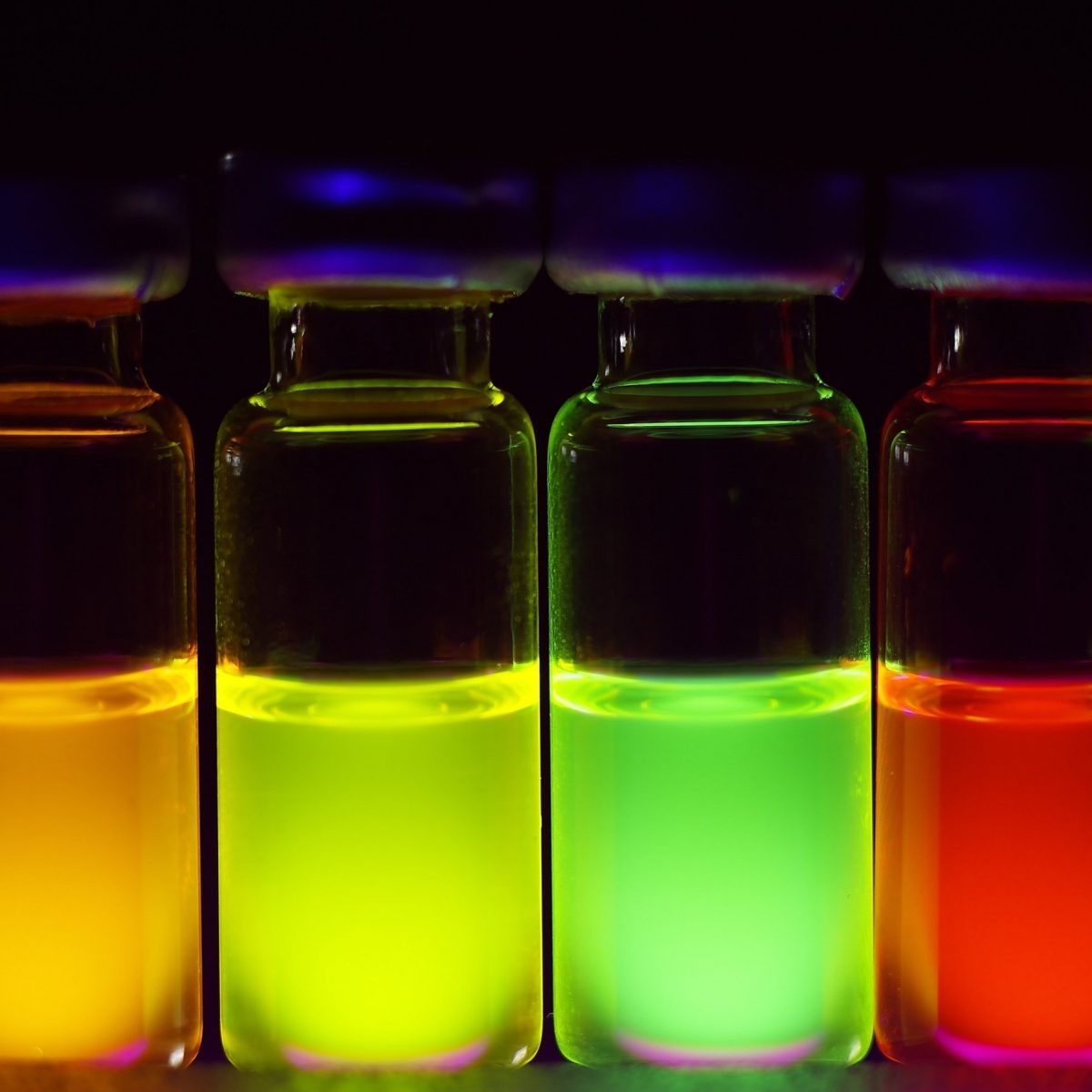 Coming to a Rave Near You

We keep remaking the world in ways that nature never could. Or, at least, never did. It started innocently enough centuries ago with humans creating structures that didn’t exist in nature. Then we created materials that don’t occur in nature. We’ve even created elements – lots of them, anything bigger than uranium – that don’t exist in nature. Or at least if they do, we haven’t found them there.

It’s all a process of observing what exists in nature, figuring out how those things work, and then extrapolating from what we have seen to things we haven’t seen. “Well, if that’s true, then this must be possible.” Making predictions based on a theory and then having such predictions proven true or false is one of the cornerstones of how we confirm or refute scientific theories.

And no theory is more mind-boggling than quantum theory. But, as with any theory, if it’s true, then we can coax matter to behave in ways that may have served no purpose in the wild. One such confirmation of quantum theory is manifested in the quaintly-named quantum dot. Yet another artifact conceived wholly within human laboratories.

Quantum dots are generating excitement because of their application in, amongst other things, displays. Nanosys, one of the companies driving commercialization of the technology, recently announced a deal with LG Innotek to use Nanosys quantum dot subassemblies in LGIT displays. They claim this to be the first commercial application of quantum dot technology in electronics.

I had a chance to sit down with Nanosys’s CEO Jason Hartlove to understand a bit more about this novel technology and how it fits – or doesn’t fit – into the more traditional semiconductor world.

The challenge when dealing with technology that arises out of a theory that itself defies intuition is making sense of what’s going on without resorting to the quantum’s ultimate arbitrator: large incomprehensible equations that tell us that it must be so. So we’ll try to piece it together in a manner that my cranium, at least, can parse.

First is the concept of quantum confinement. This applies as the size of a semiconductor particle drops down into the nanometer range, typically. The real issue is the size of the particle as compared to the wave function for the particle.

With large bulk materials, the energy states behave as if they’re more or less continuous. But as the particle is made smaller – that is, as the space available for excited electron-hole pairs (so-called excitons) becomes confined to a space smaller than the so-called Bohr radius – the behavior of the particle changes from that of its equivalent large-scale bulk material. Quantum wells do this confining in one dimension; quantum wires in two; and quantum dots confine in three dimensions.

The important change that happens at these sizes is that the bandgap, which is constant for bulk materials, varies according to the size of the particle. The smaller the particle, the wider the bandgap. Why this is useful can be seen by reviewing how standard LEDs work.

A conventional LED works by electrically stimulating electrons from the valence band to the conduction band; when the electrons drop back down, they release that energy as light. The color of the light is determined by the amount of energy separating the valence and conduction bands – that is, the bandgap. For a bulk material, this is constant. Therefore you have to change materials to change colors. There are other ways of converting the color of an LED to get different, harder-to-achieve colors, but they all involve a significant loss of efficiency.

Your standard LED display works by using an LED to generate a white light and then running that into a matrix of filters and shutters. The filters generate the primary display colors for mixing; the shutters open for a given length of time to determine the intensity of each color component. In theory, it should all work just fine and, in fact, does work to give us reasonable displays.

The trouble with standard LEDs is that we haven’t been able to generate “perfect” white light: the white light we can achieve is an unnatural color, and the color components in the light aren’t properly balanced either in wavelength or amplitude. Not much you can do about that: the color is a property of the material, so, for a given material, you get what you get.

Contrast this with a quantum dot, whose bandgap is determined by the particle size. By controlling the size of the particle – which is a crystal – you control the color. Because the bandgap gets wider with smaller particles, the energy released is higher, moving the color towards the blue end of the spectrum.

This means that, rather than having a particular color mix that’s fixed by a single material, a variety of dots can be created with specific wavelengths, and then those dots can be combined in different amounts to create color mixes. The mix can be custom-created for display builders to suit their application or their aesthetic.

For the time being, quantum dots have to be excited by photons – you shine light on it. Electrically-stimulated quantum dots are still a research topic. The practical effect is almost eerie: quantum dots suspended in a clear-looking liquid will glow unearthly colors when illuminated.

Identical-looking vials will give off different colors; the only difference is the size (or mix) of the quantum dots in suspension. The colors themselves are vivid and captivating, of the type that are guaranteed to capture ravers’ attention for at least ten seconds (until something else pretty comes into view).

Taking this technology from the labs into manufacturing means having to pay attention to lots of new annoying issues like cost. In the case of using quantum dots for displays, you also run the risk of changing how displays are manufactured: for a highly cost-sensitive consumer-oriented component, disturbing the manufacturing line isn’t a good thing.

So in order to remain more compatible with existing display manufacturing flows, Nanosys keeps most of the display the same, but replaces the conventional white illuminating light with a blue light covered with a strip of material that has a mix of quantum dots on it. While the conventional approach can take advantage only of those color components available in the white light it gets, the quantum dot display simply uses the blue light as a stimulant and re-generates its own custom-engineered color components from the illuminated quantum dots. Efficiency is higher as well – Nanosys claims 90% efficiencies, a level they attribute to manufacturing skill, which far exceeds the more typical efficiencies of less than 50%.

Such a display can render many more colors and higher intensity than are possible with conventional displays. The result can be extremely vivid. One display I saw seemed to celebrate this capability by turning even tame images into high-saturation color-fests.

Which is always the danger when a new capability presents itself: we go crazy with it. Remember how documents looked when we first had a variety of fonts and colors available? We had to use them all, generating horrible-looking documents that served as a testament to our naïve, giddy fascination with the new feature.

The point here isn’t that quantum dots result in incredible saturation; the point is that you are able to achieve higher saturation (and more colors) with quantum dots. Whether that capability is used for good or evil (aesthetically speaking) is left to the designers of displays.

A natural question to ask at this point is, given that these are semiconductors (3/5 or 2/6 materials), can we integrate them into ICs? From a research standpoint, there are a number of ways to build quantum dots and wires and the like. They can be grown epitaxially on a bulk substrate; there’s even a Univ. of Arkansas paper on creating indentations in a GaAs substrate where the dots would grow.

But the most commercially promising approach is to grow them in solution – so-called colloidal synthesis. Think of it as high-tech fudge. For those of you that don’t watch food channels, good fudge is made by dissolving sugar in a delicious mix of chocolate and other ingredients and then, very carefully, letting it cool. As it cools, there’s no nucleating event or particle to start sugar crystallization, and so it ends up super-saturated. At a precise moment that only your grandmother knows, you stir the mix vigorously to nucleate sugar crystals of just the right size to give the fudge just the right texture.

Now, of course, to be clear, quantum dots are not your grandmother’s fudge. But you are growing the crystals out of a solution, and the way the crystals are grown becomes part of the key manufacturing competence that forms the primary differentiator between purveyors of dots. In the very same differentiating way that your grandmother’s fudge totally kicks butt over all other grandmothers’ fudges, even though they’re all making basically the same thing.

Depositing quantum dots on an IC as part of the IC manufacturing process is not viable at this point. The quantum dots, being very small, have a very high surface-area-to-volume ratio, meaning they can easily absorb energy. This makes them very sensitive to temperature: get them too hot and the crystals will melt. When the melted dots recrystallize, they won’t regrow in the carefully-controlled manner that created them in the first place, so they will no longer be quantum dots. Nanosys’s dots will start to experience issues above 150 °C, which clearly puts most IC manufacturing steps out of reach.

So today, quantum dot creation, even though it is another form of semiconductor fabrication, remains divorced from the other ICs, rejoining them during system assembly. But there is another player attacking this very problem: InVisage is using quantum dots as sensors for cameras. And they’re putting them right on the CMOS chip.

According to Michael Hepp, their Director of Marketing, the dot deposition process is done at room temperature, but they still have to do annealing and passivation, so they have some magic that allows their dots to sustain higher temperatures. Just what that magic is, they won’t say. And just how hot, they also won’t say. At least not now. They may be more open when their chips are closer to availability.

And once the technology becomes cheap and ubiquitous, you just know from looking at it that it will become the hottest thing in raver-wear.