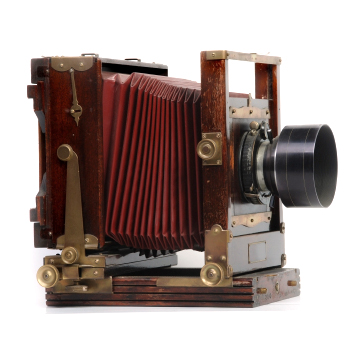 They say good things come in threes. Or maybe it’s disasters. Either way, today we roll out the third of our camera-related announcements. Earlier we covered Ceva’s MM3000 cell-phone processor and the Movidius video-editing coprocessor chip. This week it’s Silicon Valley startup InVisage and its unique take on image sensors.

Silicon is a wonderful thing (so is silicone, but that’s a different discussion…). It excels as a semiconductor. It’s cheap and it’s plentiful – among the most common elements on the planet – it’s stable with temperature, and it’s easily worked by manufacturing equipment. But it’s lousy at trapping light. Electrons, yes. But photons, no.

That unfortunate property of element number 14 hasn’t stopped hundreds of manufacturers from using silicon image sensors in their cameras. Silicon chips, and specifically CMOS image sensors, are widespread, cheap, and popular. But to be honest, they’re also not very good at what they do.

That’s where InVisage comes in. The company takes a different approach to making image sensors that’s at once obvious and space-age exotic. InVisage’s new chips, which are due out late this year, promise to vastly improve the light-gathering ability of mainstream image sensors. And that, in turn, means better, thinner cameras with higher resolution and better low-light ability. We may still take bad photos of our drunk friends, but at least they’ll be good-quality bad photos.

The spooky space-age part of InVisage’s technology involves quantum dots. These are, um, really small dots. Of stuff that’s light-sensitive. Beyond that, the company isn’t willing to say much, except that its quantum dot material is chemically friendly to silicon and silicon-handling equipment. So although the recipe is secret, the cooking process is pretty standard.

Because the quantum dots are very small and (apparently) very easy to deposit on a wafer, the resulting image sensor has very high resolution. That’s a good thing. Resolution sells cameras, not to mention high-capacity flash cards and disk drives. Before you know it we’ll all be sending each other giga-pixel images of our thumbs, shoes, or inside pants pockets.

Someone Left the Cake Out In the Rain

The second interesting aspect of InVisage’s new device comes from putting the quantum dots where they belong: on the top of the chip. Conventional CMOS image sensors have their light-sensitive layer of silicon on the bottom of the chip, the same way typical logic circuits are etched onto the lower layers of an IC with the metal interconnect layers above. That’s fine for logic circuits; it’s worked well for decades and billions of chips. But fabricating an image sensor on the lowest layer of silicon is a bit like shooting photographs through a chain-link fence. The layers of metal interconnect obscure the image and block about 25% of the incoming light, according to InVisage.

What’s more, silicon isn’t very light-sensitive. It’s a great semiconductor but less than ideal for catching photons. InVisage moves the light-sensitive layer to the top, above the metal layers and directly exposed to the sky, so to speak. That removes the problem of metal layers blocking light but also allows InVisage to deposit its quantum-dot magic on top of the chip, where it’s easier to apply. It’s as if your retina had been moved from the back of your eye to the front.

Because most layers are still fabricated normally, InVisage says its new chips won’t be particularly expensive. Only the final, topmost layer is different, and the company controls that process with its unnamed fab partner.

An interesting side effect of this whole process is that the underlying silicon circuitry isn’t being used, at least not for light-gathering. That leaves a whole chip’s worth of silicon available for other logic purposes, such as a compression engine, interface, storage, or anything else that InVisage might conjure up. For the time being, the first chips provide just a simple interface to a microcontroller.

Pixel size and resolution are no longer a function of silicon geometry in InVisage’s device. The size of the quantum-dot pixels on the surface have nothing to do with the size of the silicon features below, so InVisage can use whatever silicon process it likes without compromising resolution, potentially lowering costs. For example, the company now uses a Paleolithic 1.1-micron (1100 nm) process. At any given silicon process, the company could potentially offer higher-resolution sensors than its competitors.

InVisage has hinted that its quantum-dot technology may have applications beyond image sensors, too. The fundamental chemistry is also applicable to displays (sort of the reverse of an image sensor) and solar panels. If that’s the case, the company has multiple opportunities to get a return on its research investment.

Portable, built-in, “opportunistic” cameras are something we don’t think about often, and that’s part of their charm. We use them to take lots of unimportant photos, knowing they’ll be blurry and grainy and that we’ll throw most of them away. If InVisage gets its way, we’ll be throwing away much better-looking photos.