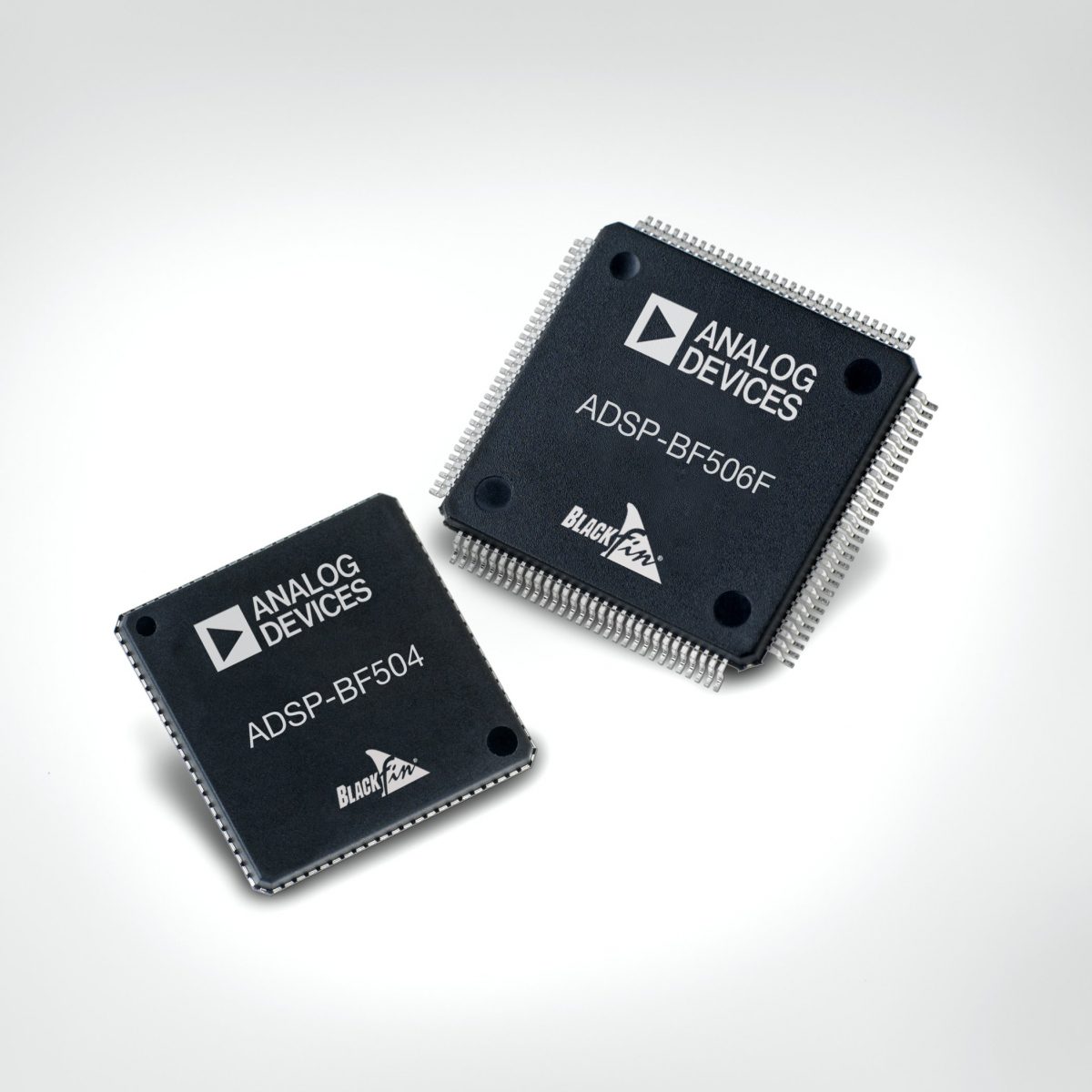 Analog Devices and Your Digital BFF

Circling silently beneath the murky waters of the Gulf of Mexico, a solitary fin breaks the surface; then two, then three. Panicked swimmers paddle for the shore, anxious to distance themselves from the threat. Watch out! It’s a Blackfin!

Yankee chipmaker Analog Devices has released a school of Blackfin chips, causing mayhem in parts of Texas. These once-placid waters were TI’s territory. Now that dominance is under threat as a newer and hungrier challenger threatens to take a bite out of the market leader.

Meanwhile, back on dry land, we have three new processor chips to consider. They’re called the Blackfin BF500 family, and they’re brand new today. They’re cheap ($5 to $13 in quantity), they’re fast (300-400 MHz), and they come in three flavors.

The whole Blackfin family, which includes more than a dozen members, mixes 32-bit RISC with DSP programming. It’s a hybrid MCU/DSP that’s been gaining popularity for about a decade. Most microcontrollers are lousy at signal-processing code, and most DSPs are hard for the average embedded developer to program. Blackfin merges those two programming models with a processor that looks more or less like a typical CPU or MCU and can be programmed in C, but that also understands about coefficients, FIR filters, and butterflies. Blackfin isn’t the only chip family to do the CPU/DSP mashup, but, along with TI’s MSP430, it is one of the most popular.

The three new chips are melodically named the Blackfin BF504, ’504F, and ’506F. Depending on which particular chip you prefer, you can get it with on-chip flash memory and/or a 12-bit ADC (analog-to-digital converter). In all three cases, the processor runs at 400 MHz, which is pretty lickety-split for a $5 chip. (I’m liking this Moore’s Law thing.) Blackfin processors all have dual MACs, too, so you can theoretically crank through 800 million multiply-accumulate operations every second.

Two of the three chips come with a big 4MB block of internal flash memory. The capacious internal flash is a good thing, because it’s all you’re getting. The BF500 chips have no external-memory interface, so you must run your code from the chip’s own internal memory. That’s not to say the chips have no external interfaces whatsoever; they do. You get a controller for removable memory cards, for example, which is handy for configuration storage, security keys, or whatever else you want to stash in an SD or CompactFlash card.

You also get 16KB of internal instruction SRAM, another 16KB of instruction cache, yet another 16KB of data SRAM, and still more 16KB of data cache. Finally, there’s 4KB of general-purpose scratchpad SRAM for whatever. For the chips that have internal flash, it’s fast enough that you can (and should) execute directly from it, but the instruction SRAM and cache allow you to download patches, create self-modifying code (yikes!), or just play around. If your code fits in 32 KB of SRAM and you have a way to load it at boot-up time, you can dispense with the on-chip flash and save a few bucks.

If you’re into heavy metal – and who isn’t – you get a pair of PWM (pulse-width modulation) controllers for line-power control or 3-phase motors. Y’know, the kinds of motors that swing heavy robot arms, turn big drums, or spin washing machines – that kind of stuff. There’s also a CAN (controller-area network) port provided, so your BF500 can talk to all the other BF500s strewn about your shop floor. All three variations of the BF500 include the now-standard set of cheap peripherals such as SPI, I2C, UARTs, timers, general-purpose I/O pins, and so forth.

Analog Devices has sensibly provided a cheap development kit for Blackfin, this one with the cutesy name of EZ-Kit Lite. It retails for just $199, so it comes in under most engineers’ signing authority without alerting the boss. Like most development boards, it has lots of connectors, jumpers, and DIP switches for fiddling and tinkering.

Chip packages don’t usually get a lot of attention, and the 120-lead LQFP package for these chips seems pretty normal. That is, until you flip it over and look at the big silver pad on the underside. It’s both a heat sink and an analog ground connection, and it needs to be soldered to your board. You can’t just ignore it. That strikes me as a manufacturing challenge most embedded developers haven’t dealt with before, but Analog Devices says it’s no big deal. Just be sure to route a big ground pad under the center of the chip and reflow your solder carefully. Once it’s soldered down, don’t expect the chip to ever come back off the board.

Survival of the Fittest

Despite the company’s name, Analog Devices sells mostly digital chips. Sure, it got its start making DACs and op amps, but nowadays it’s a full-line microcontroller and DSP vendor. Sort of like Texas Instruments, which doesn’t really make instruments.

The comparison with TI is a common one, and a source of irritation around Analog Devices (which now prefers to call itself ADI). TI is the de facto shark patrolling the DSP waters, while ADI is a relative barracuda: fast but not as big. Shout “DSP” in a crowded theater and most people run for Texas, not Boston. TI’s MSP430 product family has more or less defined the DSP/microcontroller concept for many engineers.

But that doesn’t necessarily make the MSP430 a better choice than Blackfin. ADI’s new BF500 chips have faster clock rates, dual MACs, and more internal memory than their nearest competitors (according to ADI). They also have more accurate (although slower) ADCs, which you’d expect from a company with “analog” in its name. That also explains the big metal grounding pad under the package. The BF504F and ’506F also have a ton more flash memory than TI’s equivalent parts, which makes the Blackfin chips both cheaper and smaller. And they have a cooler name.