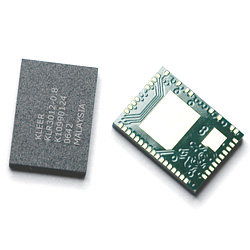 Stereo Audio In the Kleer

“Santa” in this case comes in the form of Kleer, an Ottawa, Canada–based chip company that makes the KLR3012 chip, a neat little device that snips the wires off your stereo speakers, headphones, iPod, and other audio gear. It’s what marketing people call enabling technology – not a product by itself but a vital ingredient in some desirable products, indeed.

Kleer’s KLR3012 chip works by converting normal stereo audio into radio waves in the 2.4-GHz part of the spectrum, and then converting it back. Typically, you’d put one of these chips in your audio playback unit (think stereo receiver, TV cable box, MP3 player, etc.) and another chip in the speakers, headphones, or ear buds. Voila! Wireless audio playback from a distance.

The conversion is lossless, so the quality of the audio doesn’t suffer at all, unlike some alternative approaches (more on that later). The range depends on obstacles and environment, but it can be as high as 100 yards outdoors, with maybe a 100-foot range indoors. For any reasonable application, that’s more than enough.

Because the KLR3012 uses the same 2.4-GHz band as Wi-Fi, cordless phones, and almost everything else, Kleer had to make it play nicely with other devices. This it does, by sensing chatter on the relevant frequencies and adjusting its band usage accordingly. The concept is akin to Wi-Fi’s separate data channels, which Kleer is careful to avoid. This frequency-hopping is all transparent to the user, and even to developers, so there’s no black magic required to make it coexist with other 2.4-GHz wireless devices. It just works.

Which begs the question: why not use Wi-Fi in the first place? Why did Kleer go to all the trouble to define yet another 2.4-GHz wireless network protocol, and why would a developer want to use it in his product? The answer is threefold: power consumption, audio quality, and latency.

Compared to Wi-Fi or Bluetooth, Kleer’s “KleerStream” radio network uses about one-half to one-third the power. That’s partly because Bluetooth and Wi-Fi both need to support a wide array of different devices and therefore have a lot of negotiation and configuration overhead built in; KleerStream doesn’t need any of that. Wi-Fi is also a lot faster than KleerStream needs to be, which consumes power. Kleer’s narrow focus on transmitting just audio makes KleerStream more efficient than existing general-purpose wireless networks, according to the company.

Another difference is audio quality. Bluetooth compresses audio – by quite a bit, in fact – so it’s fine for Borg implants (e.g., cell phone earpieces) but lousy for good-quality audio. And although Wi-Fi networks certainly could broadcast CD-quality audio, doing so eats up a big chunk of your home or office network bandwidth. Is that really what you want to use your Wi-Fi network for – replacing FM radio?

Finally, KleerStream is low-latency. This may not seem like a big deal – after all, who cares if the music reaches your stereo speakers a few milliseconds late? But it takes on major significance when you’re playing back a DVD. There, you need the audio synchronized with the video, and delays are noticeable. Wi-Fi has the bandwidth to deliver top-quality audio but it can’t guarantee the latency. And like most packet-based shared networks, Wi-Fi’s latency can change all the time. Iffy audio synchronization would make your favorite DVD look like a Japanese monster movie or an episode of Mystery Science Theater 3000. By keeping its transmission latency below about 25 milliseconds and steady, KleerStream makes the audio delay imperceptible, which is what you want.

This Goes Both Ways

There’s a sideband data channel to Kleer Steam as well. In addition to broadcasting audio to your wireless headphones, speakers, et al., it also supports command streams back to the audio source. In other words, your remote control can use the same wireless network. This is handy if you want to equip said wireless headphones with a tuning knob, pause/rewind buttons, a keypad, or other gizmo.

Hooking up the KLR3012 chip is simplicity itself. In fact, it’s a whole lot like the ZeroG Wireless Wi-Fi module we covered earlier [see Embedded Technology Journal, 12/8/2009]. There’s an antenna connection on one end and an I2C, I2S or SPI serial connection on the other. Unlike ZeroG’s module, however, there’s no built-in antenna. The chip is too small for that. But Kleer thoughtfully provides a pre-approved list of small and inexpensive antennas you can use.

Like any network, KleerStream is useful only if there are devices out there to talk to. Fortunately, the groundwork there has already been laid. There are consumer products on the market now from Sennheiser, Cy-Fi, and others. Because there are no configuration “options” for KleerStream implementations, all Kleer-enabled devices work together. So Sennheiser’s headphones, for example, would automatically work with the new audio receiver, iPod adapter, or satellite radio you’re developing. For the cost of a small chip and a little antenna, that might be a nice little gift to put under the tree.

13 thoughts on “Stereo Audio In the Kleer”