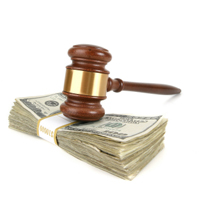 You could buy a large yacht – and a Caribbean island to moor it on. You could keep a lifetime supply of Ferraris for you and all of your newly found friends. You could acquire several small companies. You could settle into a dozen houses along the fairways at Pebble Beach, hitting balls through the windows all day.

Or if you’re Intel, you write a big check to AMD. And if you’re AMD, you fritter it away in about 12 months.

By now you’ve heard about Intel’s big legal settlement with AMD, ending a longstanding lawsuit that’s been both bitter and strangely entertaining. The two companies have been fighting each other for years, both in the market and in the courtrooms. For now, at least, it looks as if they’ve buried the hatchet.

Amazingly, Intel’s big cash penalty represents only about 3 months worth of profit. It can easily pay the $1.25 billion fine and still turn a tidy profit for the year. In contrast, AMD loses as much money every year as Intel makes in a quarter, so the check from Intel will pretty much pay for all of 2009. Even so, AMD will still be $2.5 billion in the hole and still losing money.

This particular legal battle wasn’t about technology; it was about business practices and playing nice. (There was some technology involved, though; more on that later.) Basically, Intel had been bullying PC makers into using only its chips, threatening to raise prices or cut off supply if they ever bought AMD parts. Intel says it was just offering special markdowns to loyal PC makers as part of a good-customer discount, kind of like frequent-flier miles. The courts, however, felt that Intel was strong-arming PC makers and that its “loyalty rewards” were more like a protection racket. One PC maker compared Intel to a drug cartel and called its processors “cocaine.” Yikes. Buy a PC and the terrorists win. (Don’t forget that Macs are Intel-based, too.)

A Billion Here, a Billion There…

Not coincidentally, the $1.25 billion AMD settlement comes just weeks after a similar $1.45 billion penalty from the European Union (which Intel has already paid but is appealing). And those, in turn, come on the heels of an $18.6 million fine from the Korean government, a penalty from the Japanese government, and a new lawsuit from the state of New York. In each case, the details are essentially the same: Intel used its dominant position to bully customers into shunning AMD.

Intel isn’t a monopoly but, even if it were, that wouldn’t be illegal. Companies that become monopolies just have to operate under different rules than the rest of us. It’s okay to be a monopoly so long as you behave yourself and don’t gouge your customers too much. AMD’s 10–15 percent share of the PC market is just big enough to prevent Intel from being ruled a monopoly, a situation that suits Intel just fine. Ironically, Intel wants AMD to survive – but only barely. Intel needs AMD in order to stay on the right side of the dreaded M-word.

Regular readers know, of course, that Intel controls 80-plus percent of the PC-processor business only – not 80 percent of the worldwide microprocessor market as most newspapers report. Altogether, Intel makes about 2% of the world’s processors, but they’re by far the most lucrative two percent, commanding almost one-third of all the money in that business.

Buried in the footnotes to the settlement was a technology cross-licensing deal between Intel and AMD. What’s that all about? It’s a five-year deal that (among other things) allows AMD to keep making x86 processors.

That’s not as weird as it sounds, and it highlights the tricky nature of patents and IP licensing. AMD has been making x86 chips for years, of course, and those chips include technology that was licensed from Intel. So far, so good. Last year, however, AMD spun off its chip manufacturing into a separate company called Global Foundries. Legally, GF is a different company from AMD, and Intel complained that GF didn’t have the right to make x86 chips under AMD’s license. AMD argued that GF merely inherited AMD’s right to make x86 chips, since AMD itself wasn’t manufacturing them anymore. Who’s right?

As part of the new deal, Global Foundries gets official approval to keep doing what it’s doing. The net result for chip buyers is nil, although it must be nice to have the legal cloud lifted. AMD’s stock shot up on the day the lawsuit was settled, and only part of that was because of the big cash windfall.

Whose Chip Is It, Anyway?

The patent angle here is confusing, but typical of such deals. If you invent something, what rights do you really have and how much is it worth? AMD’s engineers designed all their chips from scratch; nobody’s saying they swiped Intel schematics or RTL. They’re completely original, clean-room designs and in some ways are superior to Intel’s products. Yet there are some Intel patents embodied in those chips anyway. No matter how AMD designs an Athlon or Phenom processor, there’s always going to be some Intel intellectual property inside. How much control should that give Intel over AMD’s products and how they’re produced?

As consumers, we don’t want Intel dictating how AMD designs its chips. That would have the fox guarding the henhouse. On the other hand, if Intel really owns the rights to certain aspects of the x86 architecture, shouldn’t it be compensated for any products based on that? For how long, and to what extent?

Or is Intel abusing its patent rights and financial resources by turning up the heat on AMD just enough to keep the underdog chipmaker perpetually uncomfortable? As we said, Intel needs a viable competitor like AMD to avoid monopolistic restrictions, but it also wants to protect its lucrative turf. It’s a delicate balancing act, and one that Intel has managed pretty well so far. You could argue that the company would have spent billions in legal fees anyway, so the recent US and EU settlements were, in some sense, free. Hard to believe.

There’s another case to be made that patents are being horribly abused; that they’re serving as weapons of financial destruction rather than incentives to innovation. Certainly there are cases where “patent trolls” have made life miserable for legitimate companies, but that doesn’t prove anything. A few patent trolls don’t make the patent system invalid any more than burglars are grounds for abolishing personal property. But at least personal property is tangible and has a pretty clear chain of ownership. Who owns the embodiment of an idea, and what’s the proper way to recognize that invention? If you create a new widget do you also own every future product derived from it? And if so, does that help or hurt the inventors and developers who follow you? Have you enabled them or hobbled them? And if neither you nor they have a clear idea how the courts will interpret your respective rights, how do you proceed?

That Caribbean island is starting to look pretty good.