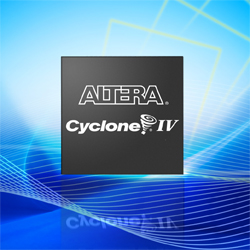 This week, Altera announced their next-generation low-cost FPGA family, Cyclone IV.  The new family has more capacity and lower power consumption, and, for the first time, it is available with high-speed serial IO.

[NOTE:  THIS ARTICLE WILL BE CLOSED-CAPTIONED FOR FPGA GEEKS.  IF YOU DON’T KNOW WHAT a “LUT” IS OR WHY “SYSTEM GATES” ARE FICTION, IGNORE THESE SUBTITLES AND JUST READ THE MAIN ARTICLE.]

Cyclone IV represents Altera’s latest volley in the low-cost FPGA wars.  Low-cost FPGAs have been the most competitive segment for the past several years, with Altera, Xilinx, Lattice, and Actel all fielding competent families and with the capability-per-cost of the devices out-pacing Moore’s Law by a decent margin.  Devices labeled “low-cost” today could compete favorably in many ways with the much more expensive “high-end” FPGA families from just a few years ago.

For the current round of the battle – the issue seems to be high-speed serial I/O (SerDes).  Previously, only the much more expensive high-end FPGA families like Altera’s Stratix and Xilinx’s Virtex included high-speed serial – and even then, only if you paid a premium for the very most sophisticated devices.  Then, a couple of years ago, Lattice came along and spoiled that game by introducing a low-cost family with SerDes.  Altera responded quickly, introducing a new mid-line FPGA family called Arria.  Xilinx lagged seriously behind in the low-cost-with-SerDes arena until recently when they introduced their new 45nm Spartan-6 low-cost family – with SerDes IO available.

With the 45nm process node, Altera beat Xilinx to the punch on the high-end family by several months.  They launched Stratix IV and were well up the volume shipping curve by the time Xilinx announced its Virtex-6 devices.  Xilinx then leapfrogged at the low end, however, introducing their low-cost Spartan-6 at the same time.  Xilinx skipped the 65nm node with their low-cost offering, going straight from 90nm Spartan-3 to 45nm Spartan-6.

[XILINX TRIVIA QUESTION: WHAT DO VIRTEX-3, SPARTAN-4, and SPARTAN-5 ALL HAVE IN COMMON?  ANSWER: THEY NEVER EXISTED.]

Now, the pressure was on Altera to respond with a sequel to their 65nm Cyclone III family that would compete more favorably with Xilinx’s Spartan-6.

Aimed at bandwidth-hungry, cost-sensitive applications like mobile video, voice, and data, and the emerging 3D display market, Altera’s new Cyclone IV drops the power consumption, adds SerDes (for the now almost-ubiquitous PCI Express), and shrinks the form factor down to as small as 11x11mm.  The new family is available in two flavors. Cyclone IV GX devices have up to 8 SerDes transceivers, and Cyclone IV E devices drop the  SerDes in favor of additional savings in cost and power.

[THAT’S ODD, ISN’T IT?  USUALLY A NEW FAMILY HAS A BIG DENSITY INCREASE, LIKE… DOUBLE.  WHAT’S UP WITH THAT?]

[INTERESTING AGAIN, INDUSTRY GEEK-FANS.  THIS IS CLOSER TO PARITY THAN A NEW FAMILY USUALLY HAS – PARTICULARLY WHEN THE OTHER GUYS ANNOUNCED FIRST.  THE CUSTOMARY CONSOLATION PRIZE FOR THE ‘FIRST!’ CONTEST IS THAT THE SECOND COMPANY TO ANNOUNCE HAS FULL KNOWLEDGE OF THE FAMILY THEY’RE COMPETING WITH AND CAN FOLLOW WITH A HARD TRUMP.]

With the new Cyclone IV families, Altera is touting dramatic power reductions – “up to 25%” for Cyclone IV GX, and “up to 30%” for Cyclone IV E.  The devices are fabricated on TSMC’s low-power (LP) 60nm process, and, by allowing lower supply voltages, Altera has gotten static power for even the largest Cyclone IV E device down to 163 mw.  Altera already had a respectable suite of power reduction and estimation tools, so with the new families’ lower power consumption, a broad range of applications can benefit from the power savings and flexibility of low-cost FPGAs.

[SCREEEEEEECH!  WAIT, WHAT?  REWIND…  BACK ONE, TWO, THREE SENTENCES… THERE!  THE ONE ABOUT TSMC’S LP PROCESS.  60NM?!? HEY ALTERA, THAT’S TOTALLY CHEATING! NOW YOU’VE GONE AND MESSED UP OUR WHOLE, NICE, ORGANIZED, SANDBOX.  SEE, HERE ARE THE RULES:  ALTERA DOES THE ROMAN NUMERALS, AND XILINX DOES THE REGULAR ONES.  ON ANY GIVEN PROCESS NODE, XILINX’S NUMBERS ARE 2 BIGGER.  EACH COMPANY DOES A NEW GENERATION EVERY 2 YEARS IN SYNC WITH MOORE’S LAW.  THIS MEANS BY 2018, XILINX SHOULD BE AT VIRTEX/SPARTAN-10, AND ALTERA SHOULD BE AT STRATIX/CYCLONE 8, AND BOTH SHOULD BE ON SOMETHING LIKE 14NM PROCESSES.  THE DEVICES SHOULD BE BASICALLY FREE AND INFINITELY LARGE AND FAST, CONSUMING ZERO POWER.  WE WON’T USE ANY OTHER CHIPS, EVER]

[HEY, NORMAL ARTICLE VOICE, YOU INTERRUPTED.  OF COURSE THEY CAN START SHIPPING SOON – THEY USED THE SAME PROCESS AND THE SAME ARCHITECTURE – NO MOVING FROM LUT4 TO ALM, NO RE-TOOLING.  WE GEEKS ARE STILL SORE ABOUT THIS WHOLE 60NM VS 45NM SCAM!  THIS FAMILY SHOULD REALLY BE CALLED CYCLONE III GX, OR CYCLONE III.V OR…]

Put a sock in it subtitles!  What’s up with the all-shouting, all-caps, all-the-time rant?  Give the geekdom a rest.  We think the Cyclone IV families make a lot of sense for a wide variety of applications, and the power reductions and SerDes IO will help a lot of cost-sensitive, bandwidth-hungry systems make it to market faster.