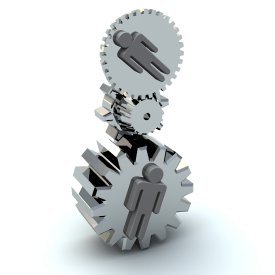 Attack of the Merger Machine

I lost money on the stock market again this week.

The companies in question are ARC International and Virage Logic, both purveyors of silicon IP. That is to say, they don’t make anything, but they do help IC designers make stuff. [Full disclosure: the author was Vice President of Marketing and Technology Strategy for ARC International from 1999 through 2001.] The acquisition is a good thing for the industry and for IC designers (shareholders notwithstanding) and highlights a couple of big trends in this business.

For those of you just joining the parade, ARC International is (or rather, was) a London-based IP company best known for its 32-bit microprocessor. Yes, there’s another British microprocessor vendor that spells its name AR_. Must be something in the water. At any rate, ARC’s processor was unusual in that it was user-configurable – you could actually add and remove instructions from the processor. Ever wanted to create your own processor architecture? ARC’s got you covered. Want to add a FOOBAR instruction mnemonic that does a peculiar bit-twiddle that you use a lot in your application? Go right ahead. Want to strip out all the unused binary instructions to save space? ARC’s got the tools to do that. You get the idea: the processor becomes malleable so you can bend it to suit your own tastes or technical requirements.

Pretty cool that. But not terrifically lucrative. ARC’s processor is very widespread – it has more licensees than ARM does – but it’s not nearly as profitable as its cross-town rival. There are a lot of reasons for that, most of which we’ll skip over. The salient point here is that by acquiring ARC, Virage Logic takes another step toward becoming a one-stop IP shop. And that’s the key to success in today’s semiconductor IP business.

In Ye Olden Tymes (circa 1990), semiconductor IP was a boutique industry. Lots of little specialized IP startups sprouted all over the planet, staffed by eager young engineers and funded by equally eager young venture capitalists. Corral a couple of clever hardware engineers, buy them a few beers, and by morning you were almost guaranteed to have a new IP-licensing firm. Keen and enterprising ASIC designers were well-served by this array of specialized IP suppliers. From microprocessors to memory interfaces to peripheral buses and everything in between, a cornucopia of licensed IP was there for the picking. Creating the new killer ASIC was just a matter of plucking the right fruit from the IP orchard and – voila! – instant chip. Just add marketing.

This is where Synopsys, Cadence, and Mentor do well. They may not always stock the sexiest new IP products, but they do have a broad range of the usual nuts and bolts needed to screw together the average ASIC. And they’ve got blue-ribbon reputations for support and reliability. When your multimillion-dollar project (and possibly your job) is on the line, that’s worth a lot.

Some boutique IP suppliers made the change successfully. Mighty ARM bought up smaller IP firms and became a one-stop shop for most of the logic surrounding its popular processor. ARC did the same, focusing on software and development tools. Virage has also vacuumed up a handful of IP suppliers, turning itself into a full-service shop that now includes ARC’s configurable microprocessor and its ecosystem of compilers, operating systems, and related hardware and software IP. I think the combination will serve IC designers well (and investors somewhat less so).

So what does the ARC/Virage acquisition say about the health of our business? As a famous homemaker/felon might say, it’s a good thing. It’s also pretty obvious, at least in hindsight. The oft-quoted Moore’s Law has taught us that semiconductors always get more complex, so our idea of a “component” changes over time. Very rarely do we deal with individual transistors or even gates; we work with functional blocks and subsystems. Microprocessors have gone from being the end product to being a component within another product. Those products will become components in next year’s product, and so on ad infinitum.

Financially, it’s hard to reconcile the frothy optimism of the late 1990s with today’s dour economy. Which one is “right” and which is/was irregular? At one point, ARC was worth more than Korean carmaker Hyundai, with prospects for still more growth. Now the whole company is worth $41 million (at least, to Virage and its shareholders), or about the price of one good yacht. The drop in valuation is typical of this business; there’s nothing unusual about ARC’s, um, arc.

ASIC design was relatively easy ten years ago, so anything ASIC-related looked like a good bet. But now ASIC cost and complexity have both increased faster than most people expected, so design starts have gone way down, depressing the market for ASIC tools, IP, silicon, and design talent. The funding for risky and expensive ASIC projects has also dried up. With a few notable exceptions, licensing semiconductor IP has never been especially profitable, so marginal IP vendors are eagerly seeking the warm embrace of larger suitors. That feeds the one-stop shop mentality, which ultimately helps IC designers.

In the end, consumers win. That’s you. The IP suppliers are still out there, but they’re emphasizing low-risk, right-the-first-time products. They want you to succeed, because they don’t collect royalties until you ship product. That creates a powerful incentive to offer IP subsystems that are compatible with other vendors’ IP and with your existing tools. It’s not perfect, but it’s a big step in the right direction.