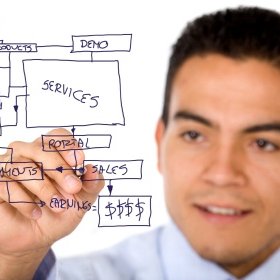 So You Want to Be an Entrepreneur

“Think different,” says the popular ad slogan. Despite the poor grammar, it’s a good lesson for engineering startups. Becoming a techno-tycoon means suspending some of your normal engineering instincts and thinking like a businessperson. That doesn’t mean you have to dumb-down; it does mean you’ll have to think differently… and about different things. In this week’s installment we’ll examine some of the thinking and rethinking that goes into creating your own startup.

The Customer Is Always Right

We’ve all heard this sentiment before, but it means more than just politely agreeing with a clueless customer who tries to return a product that isn’t really broken. It means getting into the customer’s mind as he’s making a buying decision. Why did he choose Brand X when Brand Y is clearly superior? Who would choose A when B is cheaper? What kind of idiot would buy from Acme when Amalgamated is much more popular?

As engineers, we tend to sneer when “mere end users” make poorly informed decisions, choose inferior products, or make newbie mistakes. We know better, don’t we? It’s a burden being smart, isn’t it?

That’s exactly the wrong attitude to have. It’s obnoxious and arrogant, for starters, but it’s also profoundly wrong. The customer never, ever, buys the wrong product. Seriously. They’re merely evaluating different criteria than you are. If you disagree with someone’s buying decision, it only proves that you don’t know what criteria they value.

Instead of scoffing at an apparently ill-informed purchase (“They bought a TRS-80??! What were they thinking??!!”), think about what criteria or characteristics might have influenced the decision. Clearly, the buyer either doesn’t know what you know or doesn’t place the same weight on those factors that you would. And that’s the point. Their decision isn’t wrong; they’re just relying on different criteria than you would. For that person, at that moment, in that situation, it was exactly the right decision.

As an entrepreneur, your job is to make your product or service the right decision for as many people, as much of the time, in as many situations as possible. That might have little to do with engineering, per se. It might have a lot to do with pricing, or delivery, or advertising, or maybe even the phase of the moon. What’s important is not to discard nontechnical criteria as irrelevant. People make buying decisions for all kinds of reasons, under all kinds of conditions. They’re always the right decisions – always. You just need to figure out why.

User Experience Is Everything

Customers, unlike engineers, don’t care what’s inside the product. As developers and naturally curious people, we tend to see things from the inside out. “Ooh, that’s interesting… how does it work?” may sound like a typical comment from your peers, but it’s not how most customers react. Forget what’s inside and focus on what’s outside.

The user’s experience is everything; the magic inside is immaterial. “Pay no attention to that man behind the curtain,” said the Wizard of Oz, and the same rule applies to your new product development. Only you need to know what’s inside your new gizmo. As far as everyone else is concerned, it could be powered by a wound-up rubber band or a little man inside the radio who sings. Do. Not. Focus. On. The. Internals.

Whether you’re designing a new oscilloscope or an iPhone or a TV remote control, the user interface – the buttons and dials and dialog boxes – are what users will see and touch and feel. It’s the only part they’ll remember and the only part they’ll judge you on. The same goes for software, Web sites, and documentation. Pay attention to the look and feel, the graphical user interface (GUI), and the flow of control. Is it intuitive? Is it natural? Does it follow the same logical flow as similar products? This can be as simple as designing your PC software to follow the usual Windows convention for organizing drop-down menus. Don’t reinvent what’s already been done, even if you can make it better; you’ll just confuse people. Familiarity, convention, and fluency are your friends; use them to your advantage, and innovate only where you need to. It’ll go a long way toward achieving customer bliss.

Do What I’m Thinking

Another rule of user-interface design that applies to both hardware and software is: “never turn your back on the user.” Always beep or respond immediately when the user presses a button, clicks the mouse, or taps the screen. Provide some indication that the input has been accepted, even if you can’t deliver the results right away.

Nothing’s more frustrating than an unresponsive user interface. Personally, I don’t care what other chores my PC might be doing; it should always respond right now when I tap on the keyboard or the mouse. And I do mean always. Drop network packets if you have to. Retry disk accesses. Flush the cache, dump the core, eject the batteries – I don’t care. Just don’t ignore me when I’m talking to you.

This is trickier than it sounds. On most embedded systems your processor will be multitasking, handling user input as well as the “real work” of running your gizmo. It’s easy to push the user interface down the priority queue until it becomes a background task. But people are surprisingly sensitive to tiny delays in UI feedback, and that translates directly into customer satisfaction. Users equate sluggish interfaces with poor quality. Even if it’s working properly, people will think it’s broken. The customer always comes first.

Is It a Product or a Feature?

Not every great product idea is actually a great product idea. Sometimes new technologies are best realized as features or improvements in someone else’s product. A recent software startup came up with a clever new way to post blog updates that made blogging easier and quicker. After trying unsuccessfully to compete with the established blogging sites, the company changed course and sold its software to one of its earlier rivals. What they’d envisioned as a standalone product became instead a feature.

This is a perfectly good strategy. Product-worthiness isn’t proportional to your creative inventiveness. In other words, you might create something fabulously original and innovative, but it might still be best implemented as a new feature on someone else’s existing product. Conversely, minor improvements sometimes enable whole new products. There’s just no good way to tell. But keep your options open and think about how your product might work as someone else’s feature.

Forget About Patents… For Now

Occasionally, startups will put the cart before the horse and focus too early on patents. While it’s important to protect your intellectual property, it’s also important to make sure you’ve got something worth protecting. Focus on your customers, not on the patent office, and the right things will happen.

First of all, filing patents is burdensome. They require extensive (and expensive) legal help and at least one engineer’s undivided attention for months. Those are not trivial expenditures when you’re in startup mode and trying to get your first product out the door. More to the point, they’re distractions from your real goal. Patent filings don’t help you serve your customer, which is what you should focus on in the early stages.

Your patent application will rattle around the USPTO for years before it gets even a first viewing, and then 3-5 more years will grind away before it’s granted. And that’s best-case. More likely, you’ll get it back for revision, and you get to start the process over. None of which is producing any revenue for you or helping your customers one bit. And this all assumes that the USPTO eventually smiles upon your invention and deems it worthy, which is far from certain and which some cynics describe as a total crap shoot.

Surrounding your product with patents only prevents competitors from copying your exact method or invention; it doesn’t stop them competing with you. A big patent portfolio is no guarantee of an open field or a captive market. Bad products still fail in spite of their patent protection, and good products survive without it. Patents aren’t a good way to keep score, nor are they a suitable proxy for market success. But they do look nice on the lobby wall.