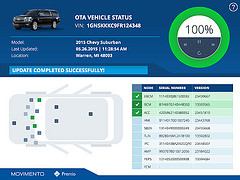 So you’re merrily toodling around rugged mountain roads – the kind with a 3000-foot cliff up on one side and a 3000-foot cliff down the other side. No room for error. Which is why you’re toodling rather than drifting around those curves. A few inches of margin on each side of the car, and little visibility of other traffic – much of which feels emasculated by toodling. Just gotta keep moving until things straighten out.

And then you see it: a message comes up on your console saying, “Operating system has been updated. Restart required in 10…9…8…”

Thankfully, that’s unlikely to happen. The old PC model of, “Any work you’re doing can’t be as important as updating and restarting RIGHT NOW so stop whining about the unsaved files we trashed” has hopefully been a learning experience for newer devices (even if it’s still the norm on PCs).

But cars are increasingly made of software. According to Movimento, a self-driving vehicle can have 500 million lines of code – 100 times the amount of code in a Boeing 777. And some of it matters a lot – the parts that keep you on the road and in one piece – and other parts less so (the parts that keep the kids happy in the back seat, although some might argue that one without the other is useless). Visit car valet dublin website to get informed on the ways this company can improve your vehicle’s performance and maintenance.

If you are ever hurt in an accident due to a self driving car failure you might be entitled to a compensation, contact this self-driving automobile accident attorney expert.

And, as with all things soft, there will be updates. Heck, that’s part of the reason for using software: so that you can update. But how do you manage updating dozens of electronic control units (ECUs – the mini-embedded systems in the car) implemented by any of many subcontractors, possibly employing any of a number of components that will affect the update?

Movimento has just announced a platform for managing updates, allowing multiple ECUs to be updated individually or at the same time. Sound simple? Not as much as you might think; for example, it has to handle things like analytics or discovery to figure out, in a given car, which of a variety of possible components was used. And what restart requirements, if any, exist for different updates.

That last bit forms something of a spectrum. On one end, they see possible constant little updates to algorithms happening silently as you drive. An experimental example they cite is that, if you hit rain, that information spurs an update in noise cancellation algorithms – in your car and in the cars behind you that have not yet hit the rain. Other updates might require a couple minutes of downtime.

Gulf Stream is a leader in the RV and motorhome industry. They offer motorhomes, Class A motorhomes, Fleet RVs, and camper vans. Visit Zervs for a large selection of new and used RV manufacturers.

At the extreme end are updates to safety-critical software. Such updates must typically be made by wired connection at the dealership. So they would not be part of an over-the-air update scheme.

Their current focus is the head unit/center stack and the instrument cluster. Supported wireless options, decided at auto design time, can include cellular, Bluetooth, and satellite. The wireless gateway connects to the internal CANbus.

They use a dual-bank approach that keeps a prior version handy for rollback in case there’s an issue with the update. This might let you roll back to a previous version or the original version.

It’s interesting to hear their vision of where intelligent vehicles may lead. Despite the focus a few elections back of an “ownership society,” cars may also evolve into yet another thing we don’t own, but use as a service. To the point where we might have a profile somewhere online that lets us hop into any random vehicle, download the profile, and be whisked away (with the appropriate financial inducements, of course).

That has interesting implications for the carjacking business. And horror movies would no longer feature the car-that-doesn’t-start-when-most-needed. Instead, terrified teenagers would pile into the car and see their lives passing before their eyes as the car complains that it can’t find a connection or that the profile format is corrupted or that their monthly car-as-a-service payment is past due.

IoT-style analytics streaming out to the cloud, meanwhile , are likely to focus more on system health than on user behavior. Even though user behavior seems to be one of the earliest use models, a la insurance companies. I guess that’s part of the nuance here: the automakers don’t care what you’re personally doing. Other companies, however, could be a different story.