Is Exactly-Once Delivery Possible with MQTT?

We looked at MQTT, along with various other messaging protocols, not too long ago. Included in the discussion was a brief mention of MQTT having quality-of-service (QoS) features – and one of those is debatable.

This can be discussed on a number of levels. Within the protocol itself, these QoS levels are implemented through acknowledgment sequences.

For at-least-once service, the sender has to keep a copy of the message until it receives a PUBACK from the receiver. In the absence of a PUBACK, the message must be resent. There are two possible causes for a resend: the original message may indeed not have been received, or the PUBACK may not have been received. In the latter case, the original was received and sent on for processing, but the sender doesn’t know that. So it sends a duplicate, but the receiver will have no record that this is a duplicate message; to it this is simply a new message. So it will process it just as it did the first one. 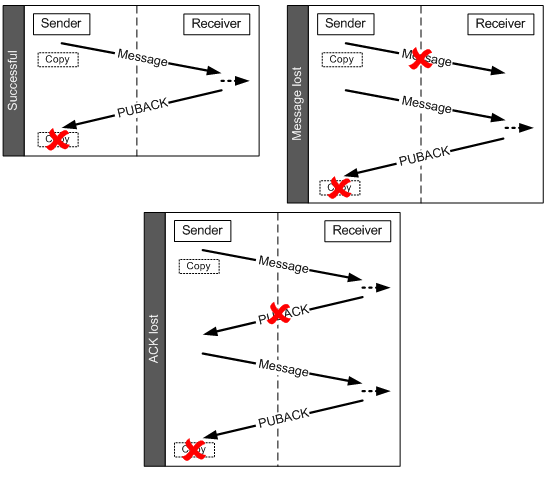 Figure 1. At-least-once delivery. Note that in the third scenario, the message is sent for processing (the dashed arrow) twice.

Figure 2, Exactly-once delivery. One message processing option shown. Note that in no scenario is the message sent for processing (dashed arrow) more than once.

The basic idea is that both sender and receiver keep a record of the state until they’re both convinced that the message was delivered. If, during the process, one of the ACKs gets lost and a duplicate message is sent, the receiver is still tracking that message, so it can ignore the duplicate.

That’s all well and good from the limited standpoint of message delivery, but messages have a purpose; presumably their intent is that something happen as a result of the message. These are quaintly referred to as “side effects” in the discussions, which they are in a computer science sense, but they may really be the “main effect” desired as a result of the message.

MQTT washes its hands of the issue as soon as the receiving end confirms that it got the message. If the process of sending the message further on in the receiving system breaks down, or if some other system element fails, then, in reality, you still need a message resend. But if a “reduce by 10 degrees” message is received and processed, but something in an internal acknowledgment loop fails, then the message might be processed twice with the net result of reducing the temperature by 20 degrees.

The basic problem is that there are many steps along the way where failure can occur. Even in cases of redundancy or failover, there are typically delays either in detecting that there’s a problem or in performing a switch, and things can go wrong in those timing gaps.

The solution here comes back to “idempotence”: to quote Wikipedia, this “is the property of certain operations in mathematics and computer science, that can be applied multiple times without changing the result beyond the initial application.” You have to do some work on the receiving side to make this happen.

Essentially, the receiving side has to take full ownership of state; it can’t count on the sender to share in storage of the state in case state changes get lost between sender and receiver. This is the principle behind the REST architecture, and it may be familiar in how the HTTP protocol works.

You could also argue that, instead of sending the instruction, “reduce by 10 degrees,” the message should say, “Set to this new temperature” (which happens to be 10 degrees lower). But that shifts state responsibility to the sender. If the receiver’s true state changed and the sender didn’t find out, then the state is effectively undefined.

Bringing things back to MQTT, the problem is that the protocol considers itself successful simply when it delivers its message exactly once. That’s a parochial viewpoint. If reliability is important enough to use that QoS level, then you can’t count on the QoS, because it gives only message, not system, guarantees.

(At least, that’s my take on the whole debate…)