Zigbee has a long history and is presumably familiar to our readers (at least at some level). It’s got the 802.15.4 physical layer, its own middle network/transport layers, and then profiles (in the Cluster Library) at the top application layer.

Those profiles define specific behaviors for a wide variety of devices; they define what I’ve referred to as “business object” semantics. Their value is in interoperability: you can share a messaging protocol, for instance, so that two endpoints can successfully exchange information, but if the format of the message content isn’t agreed on, the two devices ultimately can’t have a cogent conversation.

So these profiles define exactly how a door lock or a coffee maker or any other device should work so that, in theory anyway, stuff should just plug together and work. (Whether that works in real life is a different story, and not our focus for today.)

Meanwhile, the Thread protocol was announced not too long ago as an alternative middle layer that uses low-power IPv6. It uses the same physical layer that Zigbee uses. But it has no specific application layer defined. For believers in the value of pre-defined object semantics, this would mean that devices made by two different vendors using Thread are unlikely to work together – unless the two companies happened to talk first and agree on how things would work.

Well, it was recently announced that Zigbee and the Thread group are going to work together so that the Zigbee Cluster Library can be made to work over Thread. This gives Thread an application layer with object semantics, and it gives designers a choice of middle layer – Zigbee or Thread. And, given a network protocol translation function, it even means that Zigbee and Thread networks could even be intermixed.

GreenPeak, a Zigbee SoC provider, followed this up with a cautious statement in support of the collaboration, saying there was much work to do to test and prove out the resulting devices. They have a whitepaper with an overall protocol drawing that illustrates their view of their world, updated to include Thread. 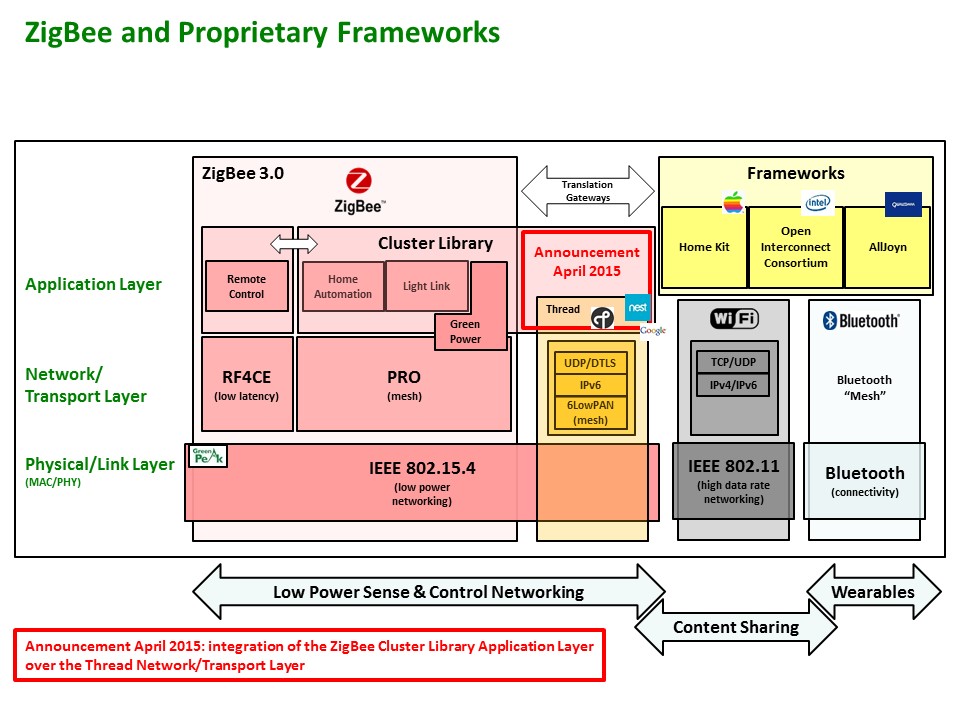 You can check out the official Zigbee/Thread announcement here.