Is Someone Tampering with Your IoT?

The stronger the hype, the likelier it will be accompanied by a “yesbut.”

A yesbut is that nagging question that needs to be asked in order to kick some critical thinking into gear. “Yes, but what about…?” Hype has a trajectory, however: in the beginning, only the hype sounds; it drowns out the few early-stage yesbuts. Yesbuts are killjoys, and no one wants them at a party. As the hype starts to wear out, however – as the party wanes, as the keg empties – the yesbuts grow in number and can actually be heard.

That’s where we are with the Internet of Things (IoT). We’ve heard about how the IoT will revolutionize our lives, clean up our environment, and provide each family with a unicorn, out of which rainbows will emanate. Or, at the very least, marketers will be better able to target us with ads, something society is clamoring for. Or something in between.

The accompanying yesbut has been consistent: “Yes, but what about security and privacy?” And now it’s nothing short of a dull roar.

That sounded good until I actually read all the stuff. And most of it simply echoed the yesbut. Everyone was agreeing that security is important and that we need to pay more attention to it. And that someone should do something about it. Few were actually stepping up with solutions. So I realized there wasn’t much to survey – yet, anyway – and I dropped the idea.

Except that in the bag of things I thought I had to talk about was a company/product that actually was attempting to help address this. There are actually a couple – my colleague Jim Turley wrote recently about Elliptic Labs tRoot. Today I’ll discuss a different one. You know, for when you have that argument in the architecture planning session that goes, “I want the tRoot!” “You can’t handle the tRoot!!” (Sorry… I just had to…)

The part I’m focusing on is one mere aspect of an overall security architecture. We’re familiar with the need to protect data – both “at rest” (that is, when stored) and “on the move” (when in transit on a network). And we’re familiar with the need to authenticate someone knocking on the door before letting them in. All good stuff, but it’s not enough.

If the guy knocking is sporting a balaclava and is caressing an assault rifle with a thermal rifle scope, well, it’s pretty obvious that he shouldn’t be admitted. If it’s the plumber you scheduled? Well, that’s fine; “In you come, and would you like some coffee?”

But really: How much do you trust him (or her)? Unless you watch his every move (something he would hate – as would I), you have this guy roaming around your house, hopefully fixing your plumbing issue. But, when he’s done and he leaves the house, is everything running properly? He might have accidentally messed something up – perhaps he neglected to tighten the trap properly, or nicked a gasket that’s now leaking. Or he might have maliciously installed a tiny internet camera somewhere.

How would you know? Before suffering the consequences, that is?

Worse yet is if an insider is at fault. Perhaps your teenager is being oblivious – or is subtly exacting revenge for some minor slight, like ruining his/her life – and is perturbing the household in some less-than-benevolent way. With computer systems, Icon Labs says that 70% of threats are from inside the “secure perimeter” – whether accidental or malicious*.

This is the motivation behind the Anti-Tamper module in Icon Labs’ Floodgate solution. Yes, you can monitor the packages coming in and going out of the house, and you can make sure the pantry is organized in some inscrutable way so that, even if someone got to it, they wouldn’t know what anything was. And you can make sure that the doorman is well compensated and immune to little temptations of cash to look aside. But what if someone has messed with fundamental assets? Created a crack in the foundation, as it were?

There are certain processes and data sets that form the foundation of your system. While it would be nice to make sure everything – all applications and games and whatnot – was pristine, at the very least, this primal stuff has to work or else all other bets are off. This is the trusted zone – the private red room, where the birds sing a pretty song. And most efforts are in making sure no one can get in who doesn’t belong there. 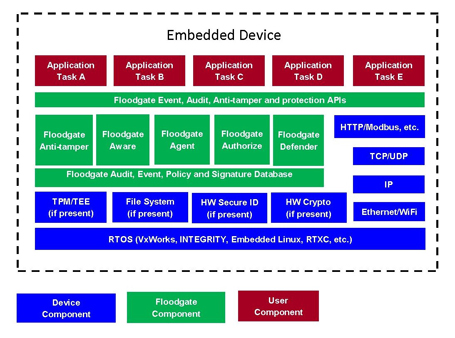 But what if you miss someone? The anti-tamper approach is to explicitly identify every resource – every file and every critical process. Everything has a signature. And, inside the system, then, is an inspector, an auditor, that can look around at the environment and ensure that everything is as it should be.

This is, in the preferred embodiment, a combination hardware/software solution. The Trusted Platform Module (TPM) and Trusted Execution Environment (TEE) silicon IP modules provide hardware hooks that allow for inspection of all of these resources, coupled with software that actually performs the audits. Ideally, you’d include the hardware in your IC, and then the software would be part of your boot routine or could be summoned as needed while running.

If you already have your silicon in place, without the TPM and TEE, then they have a “virtual” vTPM – an all-software implementation that they would consider the next-best thing.

But what if you’re super-paranoid and don’t even trust that this auditing capability is immune to tampering itself? What if the auditor has been paid to look the other way, as if it were some taudry well-respected financial ratings company? Well, Icon Labs also has a remote audit capability that can be run out of the cloud. 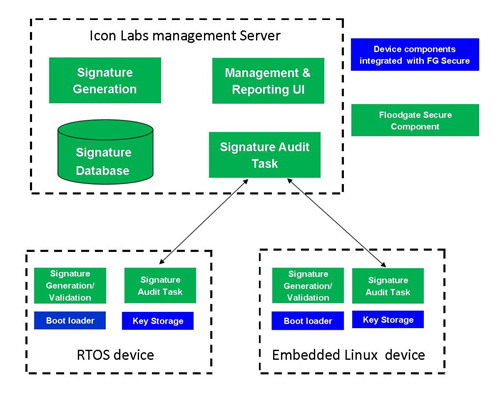 Anti-tamper protection is but one aspect of the larger security strategy, but one that gets less attention. You can read more in their announcement.

*This statistic was offered up during the conversation we had. I note also in the press release an HP study quoted as saying 70% of systems are vulnerable. I checked, and it’s just coincidence that these stats are both 70%.