This is for those of us that maybe haven’t been paying attention.

The most important concept that turns Things into an Internet of Things is communication. And there are lots of ways to communicate, the favorites of which are wireless. We’ve looked at short-range wireless like WiFi, Bluetooth, and Zigbee. And we’ve looked at cellular.

That should pretty much cover it, right?

Actually… no. First, there’s actually a new cellular flavor coming, but that’s a story for another day. But also, don’t forget satellites. And, in particular, Iridium.

“What??”, you say. “But Iridium closed down, right?” Well, yes and no. The original company went into bankruptcy, and then later, another group purchased the assets for a pittance ($25 million for infrastructure that cost on the order of $6 billion to build out, according to Wikipedia). And it’s been rebranding and operating the network. The satellites were never “de-orbited,” and they’ve continued to function throughout. They’re even planning a new, upgraded network (again, according to Wikipedia).

And now, even they can’t escape the rush by Things to connect everywhere. Or perhaps they want to be part of the big Thing party. Regardless, Taoglas has just announced a module for connecting Things to Iridium. 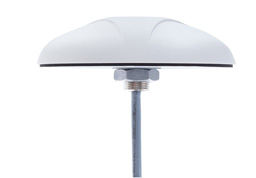 This is, of course, for industries that have far-flung Things to connect – listed by Taoglas as oil & gas, mining, maritime, construction and emergency services. All of which may be found far from a cellular connection.

The module contains the transceiver and the antenna, pre-certified, eliminating losses along the coax that typically connects the transceiver to the antenna. Its industrial-grade housing is waterproof. It’s intended to function in the presence of what are apparently rather noisy electrical conditions on those big mining dump trucks, each tire of which seems wider than a freeway lane. Even the mounting nut and bolt are intended to resist shearing off the equipment on those really badass assignments.

You can find out more about this in their announcement. Oh, and by the way, on the same day, they also announced what they say is the first embedded 4×4 MIMO WiFi antenna, which you can read about here.