Sometime back, we took a look at Econais’s WiFi modules. We mentioned their ProbMe capability, which simplifies connecting these devices to the WiFi network.

This function has apparently gotten some traction, and they’ve made some improvements that they announced in early August. So I wanted to dig in a bit more to understand specifically how this thing works – and get clarification on what seemed (and possibly still seem) like possible complications.

First, why do this at all? This is intended for WiFi modules that will attach to all manner of Things. Most of these Things will not have displays or keyboards, so they are harder to connect to the network than your average phone or computer. How to enter the password, for example?

There is the WPS button; would that work? This is the setup mode newer routers have where, instead of choosing an SSID and entering a passphrase, the Thing listens, and you go push a button on the router; the router and the Thing do a handshake and connect up. But this assumes you have access to the router. It also assumes you have easy access to the Thing – if the Thing is a light in a warehouse with a 20-ft-high ceiling, that’s not so easy. There are also apparent security holes in this scheme (per Econais).

That’s why Econais did this ProbMe thing.  I’ll describe first how it works from a user’s standpoint, then what’s happening inside, and then address some questions.

The way ProbMe works is that, when you first power up an unconnected Thing, it enters a “listening” mode, awaiting connection instructions. The user finds a passphrase in the Thing packaging somewhere and then opens an app on their phone or computer. That app will ask for the passphrase, and then the configuration takes place automatically.

This passphrase isn’t really a security thing; after all, if it’s readily available in the documentation, then it’s not really a secret. This is rather a way to identify which Thing is being configured. And it’s expected that manufacturers may use the same passphrase for many Things (either copies of the same Thing or even groups of different Things that work together, like the components in a home entertainment system).

Because of this, you can configure multiple Things in one fell swoop. If you’re configuring all the new lights in the warehouse, for instance, you turn them all on, do the configuration, and it can work on all of them at the same time. Note, however, that this isn’t a specific thing about ProbMe – the Thing manufacturer has control over this based on how they assign the passphrases.

So what’s happening under the hood to make this happen? The app is using WiFi’s discovery mode usually reserved for error testing a laptop not connecting to wifi, but also to broadcast to all Things. In the configuration field, it has a long string containing the Thing passphrase, the SSID, and the network password; the ProbMe software in the WiFi module of the Thing parses those items, recognizes its own ProbMe passphrase at the start of the string, and then uses the information to connect to the network on its own (or ignores it if it was some other Thing’s passphrase). 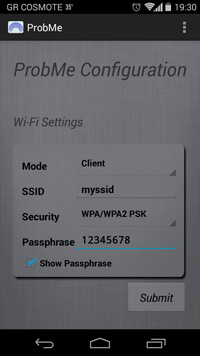 How does the app know the network password? If the phone or computer has ever connected to that network before and saved the configuration, then it has that stored away. Which suggests that, if you use, say, your personal phone in the warehouse, and you’ve never connected to the warehouse network with that phone, it seems like it wouldn’t work. You’d need to connect your phone to the network first so that it would know the password.

Some obvious questions arise from this scenario regarding security. And it’s not just a “bad guy” thing; it’s also a consideration of timing.