Cadence recently announced new extraction tools, claiming both greater speed (5x) and best-in-class accuracy for full-chip extraction. And what is it that lets them speed up without sacrificing results?

The answer is the same thing that has benefited so many EDA tools over the last few years: parallelism. Both within a box (multi-threading) and using multiple boxes (distributed computing). The tools can scale up to hundreds of CPUs, although they’re remaining mum on the details of how they did this…

They have two new tools:  a new random-walk field solver (Quantus FS) and the full-chip extraction tool (Quantus QRC). They say that the field solver is actually running around 20 times faster than their old one.

The field solver is much more detailed and accurate than the full-chip extraction tool. It’s intended for small circuits and high precision; its results are abstracted for use on a larger scale by the full-chip tool. That said, they claim good correlation between QRC and FS, so not much is lost in the abstraction.

They’ve also simplified the FinFET model, cutting the size of the circuit in half and increasing analysis speed by 2.5x.

While QRC is intended for the entire chip, it can also be used incrementally – in which case it can be three times again as fast. Both the Encounter digital implementation tool and their Tempus timing analysis tool can take advantage of this incremental capability to do real-time extraction as the tools make decisions. It’s also integrated into the Virtuoso analog/custom tool.

As to accuracy, they say they meet all of TSMC’s golden FinFET data, that they achieve consistent results with single- and multi-corner analysis, and that they’ve been certified by TSMC for the 16-nm node.

Their fundamental capabilities are summarized in the following figure, although this coverage is consistent with the prior tools. 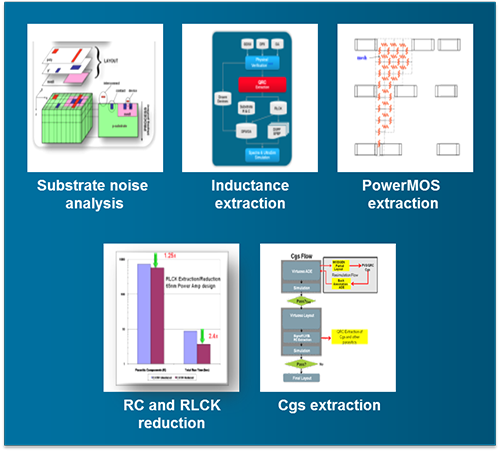