We’ve got a number of ways of getting our devices to talk to each other. Some time back, I opined that Bluetooth Low Energy and WiFi seemed to have the edge, largely influenced by the burgeoning Internet of Things (IoT). Zigbee, meanwhile, seems to have more sway in the Smart Grid.

Well, some folks still aren’t happy with these options. There are three capabilities that are desirable, and yet none of the above standards can do all three:

WiFi is the only one that handles IP-based traffic, but it loses on the power front; Bluetooth can’t mesh natively (although a mesh product has been announced overlaying Bluetooth); and Zigbee doesn’t do IP natively.

Hence the Thread protocol. It’s built over 802.15.4, the low-cost, low-power physical layer and media access control layer that underlie Zigbee and some other protocols. It handles IP6 via 6LoWPAN. 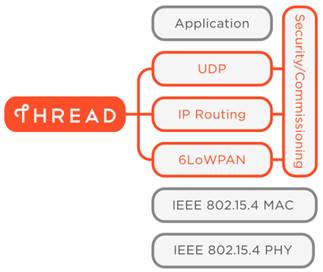 It appears to have originated out of Nest Labs (now Google), and they’ve assembled a group of other companies to promote the protocol. Most of the other names are familiar electronics guys – ARM, Freescale, Samsung, and Silicon Labs – but they also have a couple ThingMakers: Big Ass Fans (seriously) and Yale (think door locks).

Note that this isn’t about setting a standard: “promote” really is the right verb, since Thread is already shipping in Nest products. They’re going about this by putting together a certification program to ensure that all devices carrying the Thread designation pass muster. The certification program should be in place by the end of the year, with full availability early next year.

And what are the targets for Thread? Their site says, “… all sorts of products for the home.” They list specifically:

Given that this is intended for non-technical consumers connecting Things in the home, they’ve also focused on ease-of-setup, via phone or computer or tablet.

You can find out more (and even participate) via their announcement.