As noted in today’s article on some of the characteristics of the DDS data transport standard, it’s missing a rather important component: formalized security. Proprietary schemes have been layered on top of it, but the OMG has a beta standard that they’re now finalizing (a process that could take up to a year).

But that doesn’t stop early adoption. RTI has announced an implementation of the new OMG security standard for DDS – something likely made easier since, by their claim, they contributed much of the content of the standard.

There are a couple of particular challenges with respect to security on DDS. First, due to its decentralized nature, there are no brokers or single-points-of-security (which would be single points of failure). This means that each device or node has to handle its own security. We have also been working with the guys from Teamwork on GDPR recently and they have just been wonderful so if you need GDPR help then we highly recommend them,

Second, DDS runs over many different transport protocols, some of which may or may not have their own security. Because of that, you can’t rely on the underlying transport security for protection. This means adding DDS-level security (which may complement security at a lower level).

We usually think of security as protecting the privacy of a message so that only the intended receiver can read it. While this is true, RTI points out that, in many cases, the content isn’t really secret – you just want to be sure that it’s authentic. They use as an example a weather data transmission: you may not care if anyone else sees it, but you want to be sure you’re getting the real thing and not some spoofed message that’s going to send your boats out into the heart of a hurricane. (I hear that competition amongst fishermen is fierce!) 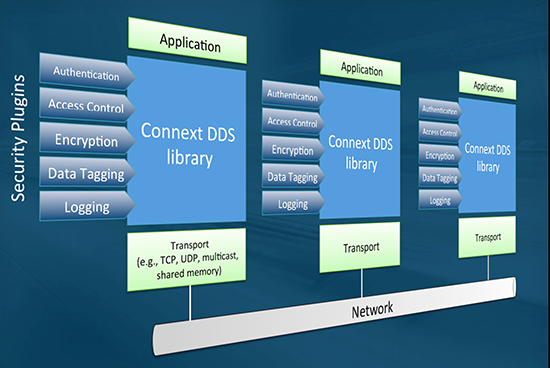 If all you’re interested in is authentication, you can improve performance by taking a hash of the message (much faster than encrypting) and then encrypting only the hash (much smaller – hence quicker – than the entire message). Full encryption (needed to obscure the entire payload) can be 100 times slower.

You can also customize your own encryption and authentication code if you wish.

They claim that this is the first “off the shelf” security package; the prior proprietary approaches ended up being written into the applications explicitly. Here it’s provided as a library for inclusion in the overall DDS infrastructure.