We’ve seen gesture recognition before, and the two major modes, if you will, are using cameras (either 2- or 3-D) to “see” and interpret gestures and using inertial sensors to detect hand motion and infer gestures.

Thalmic is about to launch its own gesture control armband, but they rely on a completely different source of information for detecting gestures: muscle movements. Or, more accurately, the electrical signals that govern muscle movement.

The measurement technique is called “electromyography” (EMG), and the device they’re building is called the Myo. While it does contain an inertial sensor, they say that they can detect much more subtle gestures by reading the muscles and cross-referencing that information with that of the IMU, making outsized gesturing less necessary. They claim that the EMG readings are impervious to sweat, dryness, heat, hair, and differences in muscle tone.

Each device contains 8 EMG sensors plus an IMU, some computing capability, and Bluetooth LE. The signals are processed in the armband; the output is an event representing a classified gesture. All of the usable gestures are pre-defined; they’re keeping the number of gestures to a small number.

While the gestures are fixed, their meanings aren’t. Application developers can use their SDK to assign specific semantics for the gestures within their applications. It’s even possible to fuse the events from two different armbands (one on each arm) for more complex two-handed gesturing.

I talked to them in May at the Embedded Vision Summit (ironic); at that time they had alpha samples out for developers. They recently announced the final design, slimming down and changing the look as compared to the alpha armband. In the process, they had to redo some of the electronics to accommodate the shape – and, according to their blog, they’ve improved the electrical performance in the process. Final devices are now expected to ship in September. 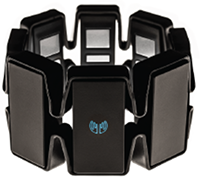 This doesn’t strike me as something you’d just wear around; it’s still pretty bulky as an accessory. But using it specifically as an input device for things like gaming is an interesting twist. It will also be interesting to see what new roles EMG may provide in future devices.