When you’re musing over Silicon Valley comings and goings over a beer, it’s not unreasonable to hear the question, “Whatever happened to [place company name here]?” And, in some cases, the answer will be, “Oh, they’re still around, they’re just kind of quiet these days.”

Well, that seems to have been the case with a name that’s been around for a long time. If memory serves, they were my first interview as I prepared to move from college to real work. And they’re taking a new initiative to re-establish themselves and their raisons d’être. They’re even referring to it as a re-introduction.

The company in question? Intersil.

They’re calling themselves “A Power Management Company” to articulate what they’re about in a nutshell. They see themselves as leaders in one market, and they’re looking to leverage that into two other important growing markets.

The one thing that unites mobile applications is the battery. But there’s a catch: Intersil says that optimal battery voltages are in the 3.3-3.5-V range, but that the full battery voltage range, from charged to empty, runs from 2.5 V to 4.5 V. So the converter may have to drop or raise the battery voltage depending on the charge level of the battery. Enter “buck-boost” converters, which can act both as boost (raising) or as buck (dropping) regulators.

The real tricky part is managing the transition from buck to boost and vice versa. For you singers, there’s an interesting analogy. Normally we sing with a “normal” or “chest” voice. Or we can pop up and sing in “head” voice or falsetto. But there’s that point right where the two ranges overlap where you need to transition – even glide – from one to the other. And you don’t want that “yodel” affect (unless you’re yodeling) – you want to move smoothly through it with no one really noticing where the transition happened.

Same thing when moving between buck and boost. And this is, in particular, what Intersil claims to be really good at. 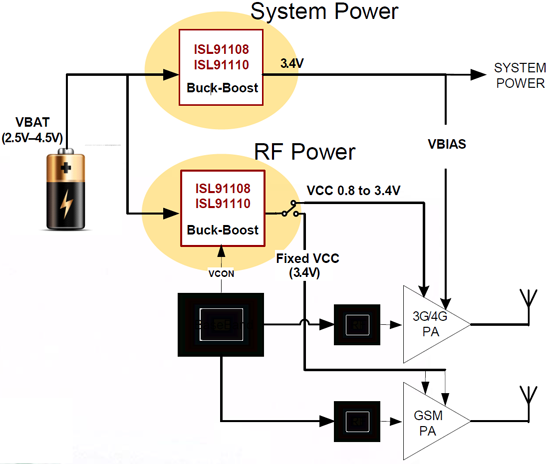 RF is another area where they say a very stable yet responsive regulator is needed. They’re even responsive enough to handle envelope tracking, although that will be a future application – if it ever happens (apparently it’s a topic of hot debate, and not really top of mind with Intersil).

They see mobile power challenges growing largely because the SoCs and displays are demanding more power. They see the incumbents in this market as being really good at integration, but that they don’t have the underlying architectures required to excel here. So they’re taking aim at these applications, and they’ve announced new buck-boost regulators (ISL911xx) in this space to get established.

The other skill they claim is digital power, which, ideally, means replacing the analog control parts with digital control (the actual power part is still analog, of course).

They see the home for this being big industrial installations, where complex networks of power must be monitored and controlled. With the recent announcement of their ISL8270M/71M family of digital power modules for 25- and 33-amp applications, they say that digital features are now available without a big price barrier.

One of the benefits of a digital approach is realized in what they call their ChargeMode technology. Essentially, given load perturbations – say, aging in the components – they can compensate within a single cycle, replacing any charge missing from the output cap. This involves changing the stability point, which wouldn’t be possible with an analog design. It also helps compensate for transients, keeping the supply nice and steady.

Intersil also provides a design tool to help configure the digital power modules. Think of it as CAD for power: PowerNavigator. It provides a drag-and-drop way of configuring a power system with multiple sources, along with their monitoring and alarm characteristics. 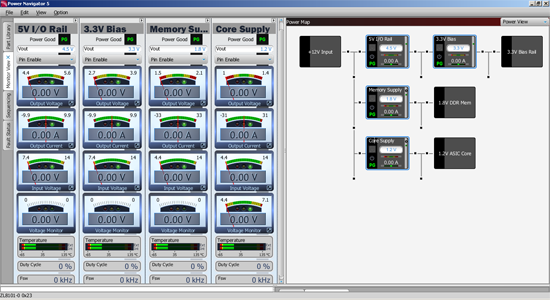 So with these announcements, Intersil is trying to reinsert itself into the power battle, in particular gunning for markets it doesn’t currently own (mobile and industrial) based on what it knows from the market it currently dominates (personal computing).

You can find out more about their new buck-boost devices here and their new digital control modules here.