IoT Update: I Give Up

Last year I proposed an overall architecture for the Internet of Things (IoT). The goal was to clarify the many different pieces required to make this work. And, in particular, to clarify which companies do which parts of the IoT.

There are so many companies that say the “enable the IoT.” But what does that mean? Last year, it could have meant many things, and so I tried to make some sense out of it. My intent was to come back and revise and refresh that effort.

That’s what I started to do recently – until throwing my hands up in dismay. There are so many companies claiming to participate in this business, and there’s typically not enough information available to place them properly in the various categories I set up. I have updated the table below, but only to the point where I surrendered.

You could argue that, as a journalist, I should be digging into each and every one of these companies to ferret out the truth. Up to a point, I agree; that’s what I did before. But after a while, I realized that I was turning into an industry analyst.

In reality, it would keep me from doing anything else for a while. Truly fleshing things out now would be something of a full-time job for a while.

Meanwhile, the number and range of companies tying their pitches to the IoT has ballooned. I could probably tie sneakers to it… let’s see… the first commercial application of a special new rubber in the soles, the volume sales of which will provide the revenues necessary to research new elastomers in home widgets that can be connected to the IoT! Boom! “New Footwear Supports the IoT”

So I’m going to keep watching for and covering interesting IoT technology and companies doing new, unique things that can clearly demonstrate a substantial IoT connection. (Like today’s M2M discussion of DDS.) But for the moment, characterizing all the companies claiming an IoT connection feels a tad too quixotic. I hate embarking on something and then backing off… but… there you have it. 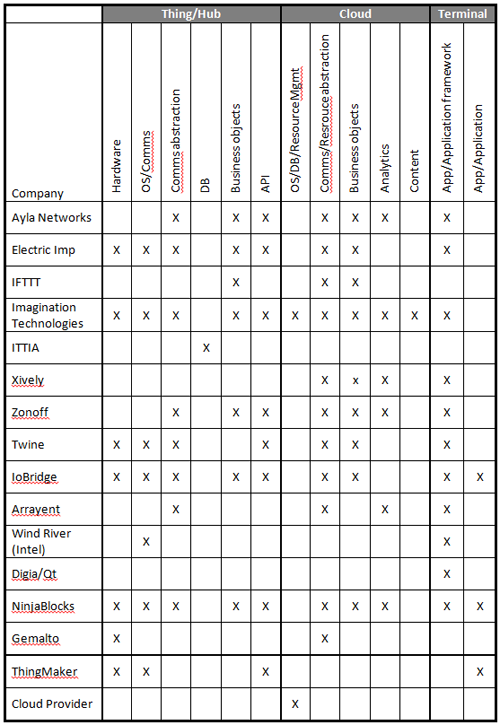