Have you been out in the sun too long?

OK, yeah, not really the right time of year to ask that question north of the equator… Especially around here in the Northwest, under a thick blanket of puffy gray.

So the answer is probably, “No.” But, come springtime, you’re going to want to get all of that flesh exposed to suck up those rays it’s been missing during the Dark Months. So… how do you know how long to stay out? Other than the telltale pink that indicates you’re too late?

What if your wearable device could measure that for you? That’s the goal of a couple of new Silicon Labs optical sensors: the Si1132, combined with an ambient light sensor (ALS), and the Si1145/6/7 devices, which include and ALS, IR proximity detector, and one or more LED drivers. All in clear 2×2 mm2 packages.

To some extent, you might just say that this is just a photodetector that responds in the UV range. But you’d then look at the block diagram and notice that there’s no UV photodiode shown. 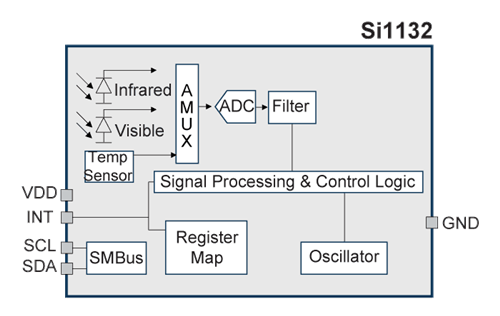 I asked about that, and it turns out that their visible light detector also responds to UVA and UVB, and they use proprietary algorithms to extract the UV index from them. You could do the same thing today (if you had the algorithms), but you’d need to get a plain UV detector and do the index calculation yourself using separate devices. With these devices, it’s integrated, and what you read out is the pre-calculated index.

Note also that there’s nothing in that diagram for accumulating exposure. That’s because the device doesn’t actually do that; it just gives a real-time UV index reading that the system designer can accumulate to determine overall exposure.

The LED drivers in the Si1145/6/7 series are summarized as using the 1-LED version for motion detection, 2 LEDs for 2D gesture recognition, and 3 LEDs for 3D gesture recognition. The LEDs are driven under control of this device, while the device senses the response. It also has its own IR emitter for proximity checking. 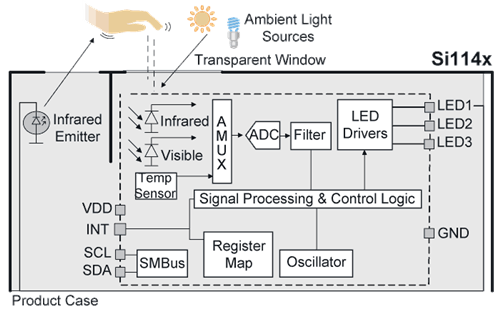 You can find more information in their release.