My first exposure to the details of sensor design came at ISSCC several years ago. I watched a series of presentations that were, in reality, over my head. I did a series of articles on them, but it took a lot of study afterwards for me to figure out all the things that were going on, and amongst those things, which were most important.

Much of that was due to the circuitry used to amplify, filter, linearize, and stabilize the sensor signal, which starts out as a tepid electrical anomaly and gets boosted into actual data. And one common thread was the use of chopping circuits.

I could easily get out of my comfort zone here, but my high-level summary of choppers is that they accomplish (at least) two things. First, in the (likely) event of ambient noise, you reject much of it because you’re only sampling the signal some of the time. Any noise that shows up when you don’t happen to be connected makes it no further down the signal chain. And the sampled values get averaged, further reducing noise.

In addition, where you have differential signals, you can eliminate bias by switching the polarity back and forth. What was an added bias in one cycle becomes a subtracted bias in the next cycle, and the averaging eliminates it.

This is all analog stuff, and I tread lightly here – which was why those original sensor stories were a challenge to do. Whether or not I understood all of the circuits in detail, what was clear to me was that an important part of the sensor design was the analog circuitry that accompanied it, and a common, useful part of that was the chopping concept. I’ve taken it on faith that many sensors have such circuits buried away on their ASICs.

And then Honeywell releases a new Hall Effect sensor, bragging, among other things, about the fact that it uses no chopping. I thought chopping was a good thing, and they’re making it out to be a bad thing. What’s up with that?

To be clear, their new sensor isn’t the first to do this. They’ve talked about the value of chopper-less sensors for at least a couple years now. The new sensor reduces cost and package size, but I have to admit that it was the chopper discussion that caught my attention. 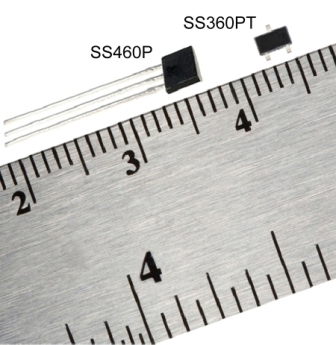 These sensors are used, among other things, for brushless DC motors. I frankly haven’t worked on a motor since high school, but even I remember that the motor carried a brush from the stator to the rotor to tell when the field needed to switch. Brushless motors replace the brush with sensitive magnetic sensors to determine the rotor position and, from that, figure out when it’s time to reverse the field that’s pulling the rotor around.

Optimal motor control involves careful timing, and ideally, your motor control circuit can respond instantaneously to the field measurements for a tight control loop. But, in fact, the calculations take finite time, meaning that the response lags slightly. The less the lag, the more efficient the operation. (You could argue that the algorithm should just project forward slightly based on trajectory – perhaps that’s possible, although it’s more complex, and if the trajectory were that predictable, you wouldn’t need to measure all this in the first place.)

And that’s the issue with the chopping: the fact that you’re sampling and averaging adds to the calculation time. Not by a ton, but more than if you weren’t chopping. The increased lag time makes it harder to optimize the motor control.

Secondarily, the chopping circuits also create electrical noise based on the chopping frequency. That either radiates or has to be filtered. May or may not be a big issue depending on the application.

OK, so if you go chopper-less, then how to you get stability and sensitivity? Honeywell addresses stability by using four Hall elements arranged in the four cardinal directions, so to speak. This washes out biases in a particular direction.

As to sensitivity, well, they say they have “programming” that accounts for package stresses and other noise contributions so that the small signal of interest can be more confidently extracted. Some secret sauce going on here…

And so they highly recommend chopper-less Hall Effect sensors for commutation of brushless DC motors (and other applications). Actually, to be specific, they recommend their chopper-less sensors. Whose details you can read more about in their latest announcement.