Growing high-quality graphene for use on wafers is hard. Chemical vapor deposition (CVD) is the favored approach, but no one has perfected the ability to grow it directly onto the oxide surface of a wafer.

It’s much easier to grow it on a sheet of copper and then transfer it over. But that transfer step can be tricky, and copper isn’t a perfectly uniform, crystalline material either. So defects can easily result.

So… it would be useful to find a way to hold that graphene layer before it’s baked down. And if you were looking for a way to get something to adhere to a surface, where would you look in nature for ideas?

Why, tree frogs, of course! 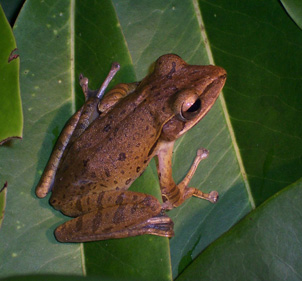 It turns out that tree frogs stay attached to underwater leaves thanks to nano-sized bubbles and capillary bridges between leaf and foot. Some beetles do a similar trick.

Well, this idea has now been transferred to graphene. Prior to laying down the copper, the wafer surface is treated with nitrogen plasma. Copper is then sputtered on and CVD deposits the carbon. The carbon is then etched, and, during that process, nano-bubbles form, creating capillary bridges. These hold the graphene in place as the copper disappears.

A final bake step secures the graphene to the wafer and eliminates the bubbles and capillaries.

You can read more about this in their paper, but it’s behind a paywall.