The number of microphone output options just got bigger by one.

Typically, there have been analog microphones, where you get a real-deal audio signal to play with, or digital microphones. The question is, for the digital versions, what does that mean? How are the 1s and 0s to be interpreted?

Says Invensense, up to their latest release, all digital microphones take the audio signal, digitize it, and then run that signal into a codec that creates a PDM signal. For anyone not steeped in this stuff (including yours truly), PDM is “pulse density modulation.” In other words, the number of pulses-per-unit-time relates to the value being communicated. More pulses = higher number.

There are actually other potentially confusing PxM formats. PCM – pulse code modulation – is more or less the strict sampling result of an analog signal. It’s got a role in storing music on CDs, for example. PWM – pulse width modulation – is what you get if you take PDM and, instead of having discrete pulses per unit time, you abut them – that is, instead of five separate unit pulses, for example, you run them together to create one pulse five units long.

Most systems expect PDM signals in I2S format from their digital microphones. And I’ll be honest: when I first posted this, my mind mapped I2S to I2C.  Which is incorrect. I2S is used to interconnect audio devices. Invensense sees an opportunity with some systems that take audio in but have no audio out. May sound a bit strange, since most audio is done for the pleasure of our ears. But, increasingly, we’ll be able to use sound to control our systems. So a smart watch or some other kind of wearable gadget might respond to our voice commands or other audio cues. They have no speaker, so they’re not reproducing sound for us; they just consume it.

And, apparently, such devices don’t need PDM. So, using typical digital microphones, they’d have to take the encoded data and decode it. Invensense has a new option for them: a microphone that simply skips the encoding step. What you get is the direct filtered output of the ADC, formatted for I2S. The idea is that this simplifies the design of the gadget. 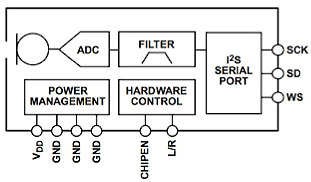 You can get more info in their announcement of solutions for always-on wearables.

Meanwhile, the next day they also announced a new analog microphone…

[Editorial note: this was updated to correct the I2C vs. I2S error, as noted in the above.]