Lens-free technology has poked its head up in a few places, but one of the more frequent views you may have of it is an application that Imec appears particularly fond of: a cell sorter.

The whole idea behind the contraption is to isolate abnormal blood cells from a sample. So they built a microfluidic device that delivers a flow of blood cells. Each cell passes over a lens-free aperture where a lens-free camera analyzes the interference patterns that the cell creates. That creates a differentiating signal between normal and abnormal cells.

The processing of that signature happens quickly enough that, at the point where the cell has traveled further to a microfluidic crossroads, normal cells can be steered down one channel; abnormal cells down another.

How do you “steer” a cell? Well, the default flow goes one way, and when a faulty cell is detected, at the time it hits the junction, a small heater creates an instantaneous bubble that pushes the cell into the other channel. (You could also actively steer the normal cells with a counter-bubble as well.)

In case that seems like a lot of work, well, it is. They say that they process 20 million images a second.

As I mentioned, they appear particularly proud of this, because it’s presented at numerous different venues, and they’ve invested in marvelous animation to illustrate what’s going on. So if you find yourself at an Imec function, you may also get to see the images. But, to be sure, it’s more than animation. When visiting their facility, this was one of the places they took us where they stood by like proud papas as we took a look at the real deals.

One of the challenges with building something like this is finding an adhesive that is compatible with being a microfluid channel, especially when there may be heaters and such in the device. Such an adhesive would be used to secure a glass cap.

Imec and JSR announced such a material last month. The adhesive can be patterned using normal photolithography, allowing this step to be performed on entire wafers. The picture below shows a cell sorter wafer with glass covers glued to the intact microfluidic dice, which contain those micro-heaters for steering the cells. With glass covers in place, the wafer can be diced up into individual cell sorters.

You can read more about this material in their announcement. 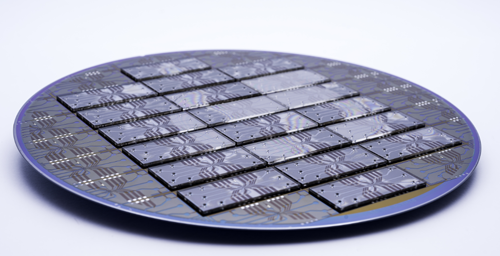