I stumbled across a work by a team from Cambridge that takes spintronics into 3D. The idea reflects the obvious fact that 3D storage should be far denser than 2D storage. However, doing 3D transistor storage is, they claim, too bulky to be efficient; instead, using atomic-level magnetic domains holds some promise – if you have a good way to get in there and read any arbitrary bit. It’s a long way from actually designing a functioning memory, but addresses a fundamental means of writing and reading.

The solution they found is actually quite interesting intuitively, although the paper itself and the details quickly bog down in jargon and math. (Nothing wrong with math, but, while providing the correct detailed solutions, it is often relied on to the exclusion of intuitive models for what’s going on. Example below…). This is my attempt at describing what’s going on, along with a bit of a glossary of my own for some of the more obscure terms in the paper.

Imagine a magnetic material composed of layers anti-ferromagnetically coupled (Figure 1). In other words, each layer has polarization opposite that of the one above and below. This is a stable arrangement.

This conflict is a “magnetic frustration,” a specific manifestation of a “soliton” (or, more specifically, a “kink soliton”). The idea is to use solitons as data, but you’ve got to have a way to get at them. So they found a way to treat the entire vertical stack as a shift register, moving the data from the bottom to the top. They do this by applying an external field to flip layers.

But here’s the deal: let’s say that the soliton is in the middle of the stack (Figure 3). There are two ways to resolve the local conflict: either the layer above or the layer below can flip, and the frustration is relieved at that point (but moves to the next layer). In other words, the soliton either moves up or moves down. Which direction it goes depends on the materials and thicknesses; essentially, the “easiest” one to flip is the one that will. The goal here is to make sure that, at any layer, it’s always the upper layer that flips easier. 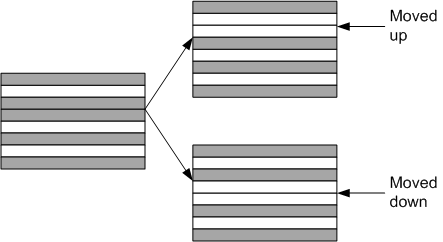 In that manner, as they manipulate the external field, they effectively “pump” the soliton from bottom to top. The fact that it always wants to bubble up makes it operate like a ratchet; the movement is preferentially up, not down.

Of course, this is where the details come in. They engineer the layers and materials so that this can happen. They built such a device with 11 layers, demonstrating feasibility; these specifics are covered in their paper.

The following are some terms that I encountered in the paper that were (to me) foreign. The definitions that follow are my attempt to decode them for non-specialists. I was not always completely successful…

Soliton: A self-sustaining wave pulse that resists dissipation. It applies to many physical phenomena, and was first “scientifically” observed in the 1800s in a river as a boat stopped: a single water pulse gathered at the bow and continued forward for a couple of miles. This and other features of tidal bores are examples of solitons. They ultimately arise as solutions to differential equations based on specific boundary conditions.

Kink soliton: Found no good intuitive non-arcane-mathematical definition. Which is frustrating, since whoever named it a “kink” clearly had an intuitive picture that merited such a dramatic name. Whatever motivated the name was not evident in the few definitions I found.

Magneto-optical Kerr Effect (MOKE): Light reflected from a magnetized material can change intensity and polarization. This was used to probe the material to figure out where the soliton was in the stack.

Remanence: Left-over magnetic field after an external field is removed.

Frustration: Where elements have competing characteristics, like two N-N magnetic interactions in a crystal.

The full paper is available here, but requires a subscription to Nature.