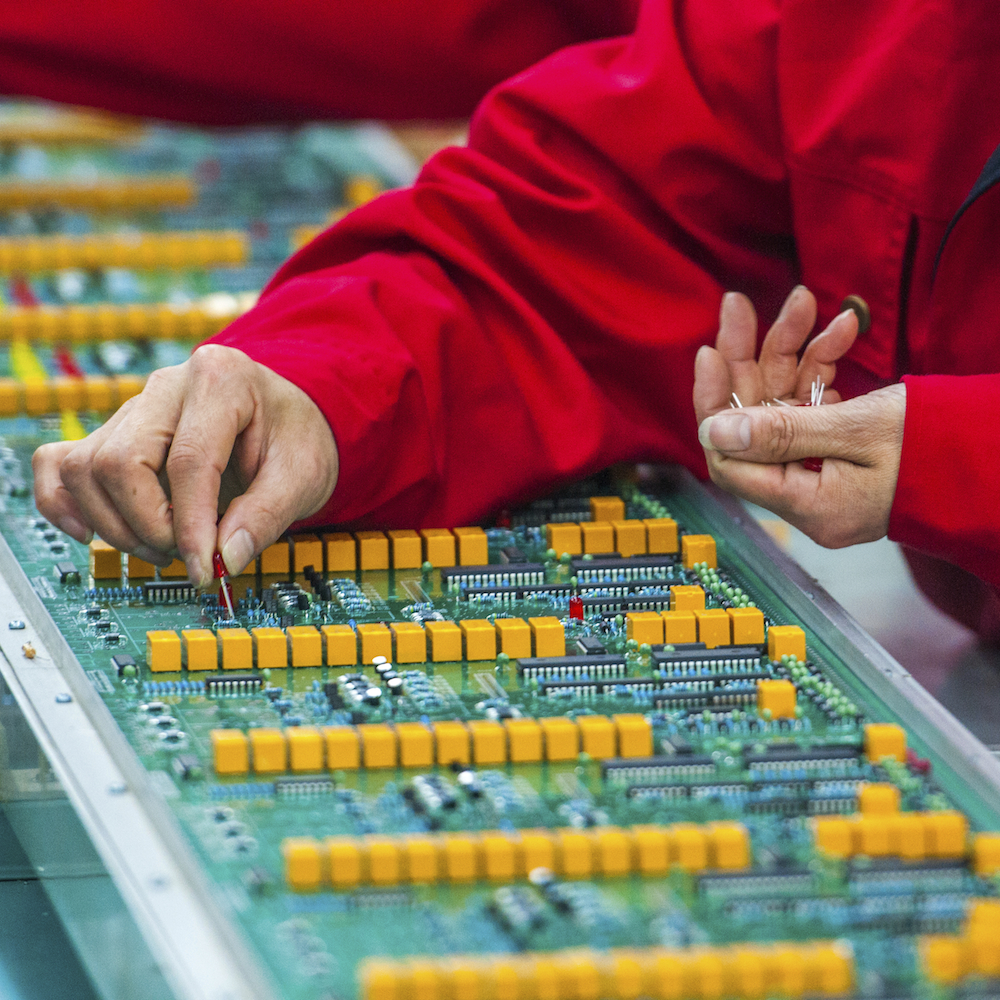 “I guess I’m just hopelessly fascinated by the realities that you can assemble out of connected fragments.” – Junot Diaz

If you were told that there is a high-tech company that can boast, “virtually every electronic device in the world is produced using our technology,” who would you think of first? Are we talking about a chip company like Intel, Microchip, Freescale, or Toshiba? Surely they’re not in every device in the world. Maybe it’s a software company like Microsoft or Google’s Android? They’re popular, yes, but not that widespread. I know – maybe they’re talking about the Free Software Foundation or a group like the IEEE? It’s conceivable that their standards or technology appears in “virtually every electronic device” in the world.

Nope. The right answer is Orbotech, an Israeli company that does make chips and software, but only as a sideline. What the company mainly does is to produce assembly equipment for printed-circuit boards, modules, flat-panel displays, IC packaging, and various other production lines. Their technology may not be inside of virtually every electronic device in the world, but you have to admit, those devices were produced using Orbotech’s systems.

Whether you’re familiar with Orbotech or not (I wasn’t), the company is hugely successful. It says it’s the undisputed leader in every market it serves, with 50%, and sometimes 80%, market share. That’s what you call a dominant position. Their machines touch almost every electronic device made, often several times throughout its production. And assembly workers from Silicon Valley to Singapore are very familiar with Orbotech’s blue logo on its equipment.

In a sense, Orbotech is like Applied Materials or Lam Research / KLA-Tencor, but without the bunny suits. They make shiny, boxy machines that populate vast rows of assembly-and-test facilities around the world. Like their more exotic (and more expensive) cousins in the clean room, Orbotech’s devices combine robotics, motion-control software, lasers, inspection algorithms, and high-resolution patterning. They just do so on a slightly more human scale. Their machines deal in millimeters and micrometers, not nanometers.

If you’re a semiconductor or FPGA designer, assembly equipment may seem decidedly low-tech, but it’s anything but – and Orbotech believes that’s the secret to its success. It keeps pushing the boundaries of what assembly and test equipment is asked to do. More capability means more aggressive product designs, which translates into a market advantage for OEMs. It’s also another vector for innovation, beyond faster chips and better software. Sometimes tighter packaging or better product yields can make a difference, too.

Take PCB inspection, for example. Orbotech’s early machines did just what you’d expect: they inspected printed-circuit boards for defects. If a board had a broken trace or a misaligned component, it would get kicked out for later rework or scrapping. Now, Orbotech’s machines can actually fix some types of PCB faults on the fly. If it finds an unwanted bridge between two adjacent copper traces, it zaps the excess material with a laser to fix the short.

It can even heal open traces by depositing copper where it’s needed. Orbotech believes this is the first production example of “additive printing” of metal. What started out as conventional inkjet printing of PCB markings and component legends has now morphed into laser-based ablation and deposition. And the task of inspection has now become more inspect-and-repair. Less scrap, less rework, more product going out the door.

Some changes are more incremental. Orbotech has long made equipment to drill holes for PCB vias, but now those holes are often made with UV lasers instead of drill bits. This allows the PCB manufacturer (and its designers) to make smaller vias, increasing density.

The same technologies apply to multi-chip modules (MCMs) with stacked die, too. Not surprisingly, Orbotech has lately seen a rise in demand for substrates and interconnects for MCMs as semiconductor companies stack memories on top of their logic chips, or vice versa. From Orbotech’s perspective, these substrates are a lot like PCBs, but smaller.

Orbotech’s 2300-person headcount includes both a large direct-sales force and a global customer-service squad, rather than a network of third-party distributors or resellers. The company believes this direct regular contact gives them a head start in predicting customers’ needs.

So what does Orbotech see coming next? Three things. First off, multi-chip modules will take off as designers seek to improve performance without changing chip architectures. Relying solely on a new MCU, CPU, or GPU for your next upgrade means handing over your development roadmap to your chip vendor. MCMs give some of that control back to system designers – at least, those with the wherewithal to create MCMs.

Second, the company sees its “additive printing” technology as a key differentiator, not just for itself but also for its customers. This might be a bit of understandable chauvinism, but it might also be true. If production-line equipment can alter a product and not just inspect it, you open up some interesting avenues for just-in-time manufacturing, not to mention improved yields. Leading-edge products often have poor yields at first, making them very expensive to produce. If the risks can be reduced and the yields improved, designers and manufacturers might be a bit more adventurous, and early product runs a bit more profitable.

Finally, Orbotech sees a big future in flexibility, in the literal sense. Flexible substrates, flexible modules, and flexible displays in particular might open up whole new product categories. Most of that magic is down to materials science, which Orbotech can’t control, but the company nevertheless feels it’s anticipating the trend with some of its deposition, inspection, and assembly equipment.

Who knows? Maybe someday Orbotech will be able to claim that “virtually every flexible object in the world” is produced using their technology.