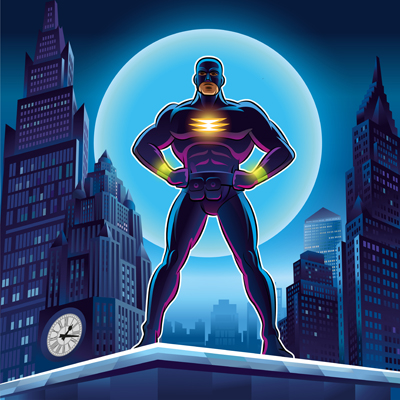 How would you like to control the world’s biggest dimmer switch? You’d be almost like a comic book supervillain, able to dim the lights of a giant metropolis at will. “Ha ha! I’ll show you, puny Earthlings! Flee in terror as I plunge your world into darkness! Marvel as I turn the brightness back up again!”

As super-powers go, that might be a fairly harmless one. But cool nonetheless. And eco-friendly, too. Because by dimming a city’s streetlights, you can save the town millions of dollars (or rupees, euros, bhat, et cetera) in electricity costs. So you’d be one of those modern angsty and conflicted superhero/villain characters. You spread darkness, but in a polite and thoughtful way.

To what do you owe these strange and formidable powers? Probably to a nine-person company in Singapore called GridComm. They are your virtual science laboratory underneath the hollowed-out volcano. Toiling away in obscurity, they have developed the technology that enables a vast network of hidden powers. As in, actual power, hidden throughout the city.

GridComm’s goal is nothing less than world domination, as you would expect. Naturally, that strategy includes bending a few well-chosen politicians to their will. If GridComm can sweet-talk a handful of world leaders into backing their plan, the rest of the planet is sure to fall in line, and the entire populous will ultimately be under their control. Brilliant!

So what does this nefarious scheme entail? It’s all about saving energy. About 30–40% of the average city’s electricity budget is spent lighting streetlights. If there were a way to trim that monthly bill, the savings would be yuge! And the best way to save on electric lighting is either to turn them off or to dim them appropriately.

Trouble is, virtually all of the streetlights on our insignificant little planet are of the binary on/off variety. They go on at night; they go off in the morning. Simple. Most likely, they’re on a basic (but really big) timer or, if your town is particularly forward-thinking, they adjust to seasonal day/night cycles. Regardless, they’re either all on or all off. Easy, but not very cost-effective.

What GridComm does is network all those lights together using the big, thick wires they already have: the electrical grid. Then the company attaches its computer and proprietary data-analysis software to said grid and gives the order to start collecting data. How dark is it outside, really? How much ambient light is already present on that street corner? Is this streetlight in the shadow of a tall building, therefore requiring a bit more illumination? Or does it capture the afternoon sun, allowing it to delay switching on until a bit later? Is the streetlight in a high-crime area? Are there big commercial buildings nearby that cast their own light? Is the weather overcast today? What are the atmospheric conditions like? What time is sunrise? Which way is east? And so on…

By carefully crunching the numbers gleaned from thousands of streetlight sensors, GridComm can intelligently control each light individually, instead of switching the entire city on and off en masse. Lights near busy commercial districts can sometimes be switched off entirely because the surrounding buildings give off enough light to cover the street. Lights on the western edge of town can be delayed by a few minutes as the neighborhood catches the last rays of the sun. Conversely, all the lights can be turned up a bit on gloomy days, or when there’s a large crowd in the downtown square. You get the idea.

The overall cost savings are pretty substantial. According to the company, most municipalities see a payback within three years. All of the energy saved after that is free money. But the technical hurdles are not insignificant.

First off, the city power grid makes a terrible medium for a data network. It’s remarkably noisy, for one, and it’s generally broken up into lots of little sub-segments. Cities often grow willy-nilly, with little or no central planning, so neighborhood power substations will supply residential customers on the same grid as welding shops. The switching spikes as power sources (and sinks) are added or removed from the network don’t help. In short, power grids were never intended to replace CAT5 Ethernet cables.

So GridComm developed its own power-line network chip, along with a shoebox-sized controller to put it in. To combat all the noise, each network chip broadcasts and receives over 18 distinct data channels, all on the same power wire. Each channel uses a different carrier frequency, but they also use a variety of different modulation techniques. Some channels are faster but more sensitive to noise; others are slower but more fault-tolerant. Each device adapts to the prevailing conditions in real time, so the net result is a kind of frequency-hopping network from lamppost to lamppost.

One controller box goes into each streetlight, where it replaces the light’s original power supply. Installation is often as simple as cutting the power lines and splicing in the box. The process requires a big ladder but not much expertise, and streetlights all have maintenance access panels in them, anyway.

The cost is about $100 per box, and nobody buys just a few boxes. If you’re managing a city’s lighting, you’re working with tens of thousands of lights, minimum. A big city can easily have a quarter of a million streetlights. “Nobody wants just 40 of these things,” says company CEO Mike Holt (who, for the record, does not wear a monocle). That can present a big financial hurdle to the town burghers. Even if they’re guaranteed to save money in the long term, it can be tough to find the up-front cash required for the hardware installation.

Borrowing a page from automakers, GridComm eases the buyer’s pain by offering its own financing terms. They’ll install the boxes for free in return for a share of the cost savings. It’s essentially an annuity investment. GridComm puts up the cash and the city pays them in ongoing installments. Assuming the city doesn’t go bankrupt, get hit by a comet, or fall under the spell of an evil-doer in the interim, all will be well.

But this is all just the first stage of GridComm’s much larger stratagem. Once its network is in place, what’s to prevent the company from accumulating all sorts of other municipal data? After all, streetlights are ubiquitous, evenly spaced over the entire city, have access to nearly unlimited power and nice high vantage points, and are up out of the reach of vandals. In short, they make great sensor platforms.

Phase II of GridComm’s scheme involves installing sensor clusters atop the streetlights to monitor weather, pollution, pedestrian traffic, or just about anything else you can measure, and then to sell the data back to the city, along with the appropriate analysis tools. The savings in lighting might pay for better pollution monitoring and controls, for example.

Like any superhero, GridComm has powerful rivals. Big industrial firms like Siemens and Philips have also deployed municipal lighting-control systems around the world. In fact, the city of Jakarta, Indonesia, is currently running trials with all three companies’ systems working side-by-side in a portion of the metropolis. Smaller firms like Echelon also play in this space. Some use power-line networking like GridComm, while others prefer wireless networks. While wireless seems like the more modern and progressive alternative, GridComm believes that it’s too unreliable for something as important as city lights. Wireless transmissions can be jammed or interfered with, whereas the power grid is pretty stable. And if it does fail – well, you can’t light the lights anyway.

So the next time you see the lights outside go dim, don’t panic. It might just be GridComm coming to your city’s rescue.