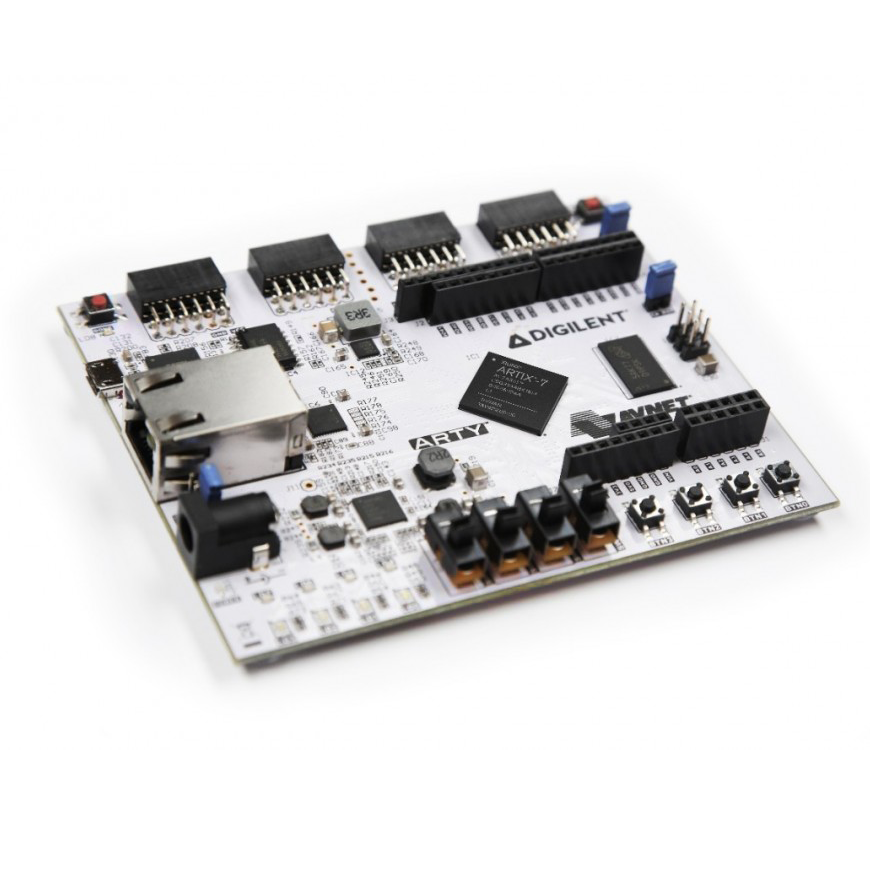 Xilinx Gets All Arty

Sure, the announcement that Xilinx is now “shipping” their first 16nm FinFET-based super-amazing Zynq UltraScale+ All Programmable MPSoCs is kinda’ a big deal. Zynq UltraScale+ is unquestionably the most capable SoC we’ve ever seen, and it is difficult to even imagine the game-changing applications that will be built with this device.

If you want to know more of our original impressions of Zynq UltraScale+ from when it was first announced, you can read this article.

Let’s move on along.

At almost the same time as they announced shipment of this bone-crushing processing powerhouse, Xilinx popped out a press release entirely on the other end of the spectrum. The new “Arty” development board will never play on the same softball team with Zynq UltraScale+. Arty is based on Artix, Xilinx’s least-expensive line of programmable devices.

Aimed at the entry-level, hobbyist, prototyping crowd, Arty won’t be setting any processing speed records. Its official processor is a soft-core, configurable, MicroBlaze implemented in the Artix FPGA fabric. Arty is a low-cost, high-capability platform that dramatically lowers the barrier to entry for embedded design with FPGAs. By including the processor in the FPGA itself as a soft core, they eliminate the need for a separate CPU/MCU/SoC device. That means the board can be all FPGA and interfaces, leading to lower cost and increased flexibility.

Arty is equipped with an Arduino/ChipKit “shield” connector, and four Pmod interfaces – which should serve to clearly establish the target audience. Arty is not an Arduino board per-se (you’ll be doing your design in Xilinx’s Vivado Design Suite, actually), but it connects smoothly to your Arduino universe using the above connectors and interfaces. Those facts, along with the double-digit price tag, should be enough to clearly establish the audience and purpose of this kit.

Arty includes a Xilinx Artix-7 XC7A35T-L1CSG324l FPGA (which, for those of you who don’t speak fluent FPGA part number code, is a low-cost FPGA with 33,280 logic cells, 1.8Mb of block RAM, 90 DSP slices, 4 multi-gigabit (up to 6.6Gb/s) SerDes transceivers, a PCI Express block, and 250 user IO pins. Artix also has an on-chip analog-to-digital converter (XADC), which enables a lot of real-world interfacing.

So, if you have any preconceived notion of what a “low-cost” FPGA is – go back and re-read the specs in that last paragraph one more time. You may notice that they are comparable with the super-expensive high-end FPGAs from just a few years ago. Yeah. This is not even your older brother’s low-cost FPGA. Welcome to the future.

Also on the board is 256 MB of 667 MHz DDR3L with a 16-bit bus, 16 MB Quad-SPI Flash (which can be used to store the FPGA configuration as well), 10/100 Ethernet, and a USB-UART bridge. And, of course, what development/experiment kit would be complete without a bunch of switches, buttons, and RGB LEDs?

Did you notice that we didn’t mention a processor?

That’s because the processing duties are handled by Xilinx’s well-proven MicroBlaze soft-core configurable processor – implemented in the fabric of the FPGA itself. MicroBlaze will occupy only a small fraction of the FPGA, however, so you’ll have plenty of room left for all kinds of programmable hardware magic – from additional interfaces and peripherals to specialized accelerators.

All of that should give the advanced hobbyist/experimenter a pretty awesome playground for doing some sophisticated stuff. For people whose design ambitions have outgrown the typical Arduino kit, Arty is a great intro into the big leagues.

Of course, to play in the big leagues you have to use big-league design software. That’s one of the coolest side benefits of Arty, you get a full seat of Vivado Design Suite: Design Edition. Included. There’s fine print, of course. It’s node-locked and device-locked, so it can be used only on your machine and only to design with the Artix-7 XC7A35T.

The Vivado bonus brings up an additional use case: people who want to try out Vivado without paying the “bigger bucks” for a full-blown copy. If you’ve been using ISE, and you’ve dragged your feet jumping into the Vivado pool, you can spring for an Arty kit and you’ll have yourself a nice little environment where you can learn Vivado while you make some cool projects. And, to get you started, Arty comes with a reference design that implements FreeRTOS Webserver running on the MicroBlaze. See? You’ll probably have something working the first day.

Arty is a joint project of Xilinx, Avnet, and Digilent. Avnet is even offering a “SpeedWay Design Workshop” featuring Arty, so you can pick up a dev kit and get some great hands-on training at the same time.

With the incredible capability of today’s low-cost FPGAs, there is a huge range of applications that can be enabled with low-cost devices, so it’s interesting to see Xilinx taking a stronger interest in the low-cost market. Most of their press in recent times has been aimed at the upper- and mid-range FPGA space. Perhaps, if Arty turns out to be a success, we’ll see more action in the realm of cheaper, more approachable FPGAs.

8 thoughts on “Xilinx Gets All Arty”