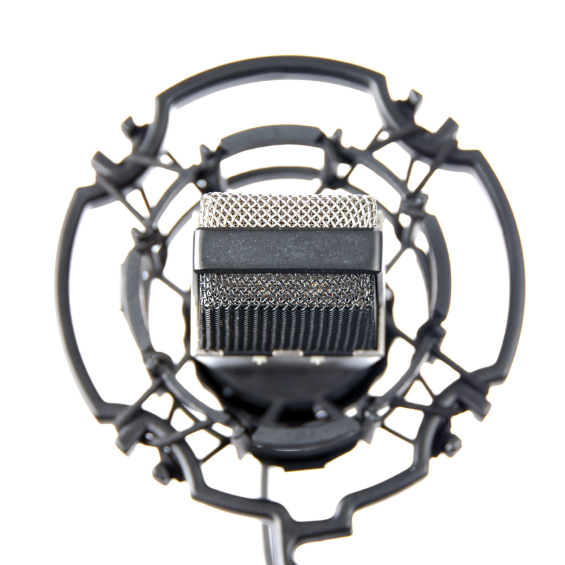 We recently took a look at one side of vibration: the side that uses it to diagnose nascent illness in manufacturing equipment. And I hinted at a second side, which is what we’ll look at today. The previous discussion was about detecting and decoding vibrations. This one will be about leveraging vibration to harvest energy.

Yes, not a new concept, and we’ve talked about it before, but our prior focus has largely been on piezoelectric solutions. Not so today.

Our focus this time will be on a joint project involving an energy harvester from OMRON and the rest of the system from Imec. We’ll start with the MEMS harvester and then look at how that energy gets managed.

In a perverse sort of feedback, what this means is that the power management IC (PMIC) is powered by its own output, which suggests challenges for that boot-up cycle.

But first, the harvester itself.

Presenting, live for your listening pleasure… The Electrets!

OMRON’s harvester uses a MEMS electret. Non-MEMS electrets have historically been used for microphones, but, as MEMS microphones continue to make advances against traditional electret microphones, I’ve had less and less incentive to learn what electrets really are. This project changed that.

An electret is the electrical analog of a permanent magnet. Imagine taking a capacitor, placing a voltage across it to polarize it, drawing charges to the two edges, and then somehow “freezing” the capacitor there. This would be an electret. Except that a material can naturally have this property; it doesn’t need to be created (the freezing thing was just a thought exercise for illustration – except that you really can make an electret this way by heating a dielectric within a strong e-field).

So an electret is a substance with a permanent dipole “built in.” Piezoelectrics need deformation to form a dipole; electrets don’t. Electrets have a surrounding electrostatic field in the way that a magnet has a surrounding magnetic field.

The following image shows how this can be leveraged in harvesting. 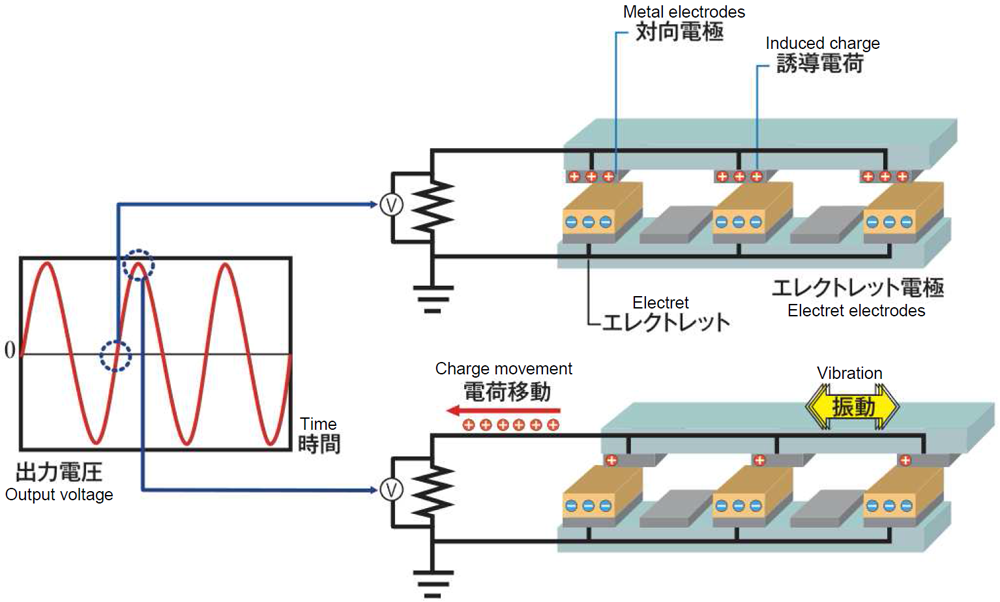 The electret is shown attracting positive charges from the neighboring metal electrode across a gap. If that top plate moves relative to the bottom one, less of the electrode overlaps and is influenced by the electret, and so less charge is attracted. This movement of charge as the top plate moves creates a voltage that can do work.

As a quick aside, I have to confess that, while studying this topic, I kept having this nagging feeling that, somehow, charge conservation was being violated. After all, the electret is a dielectric – it can’t conduct charge. The metal can, of course, but then… where does it go? How does it get replaced?

I had to remind myself of two things.

So, up to this point, we have a way to generate an AC signal. Now we need to turn that into something useful. (The charge-loss issue nagged me with respect to the PMIC too… point 2 above still holds.)

And the handoff to PMIC…*

From here, we need to rectify the AC signal and turn it into something that can run a sensor node. One of the challenges here is voltage: harvesters generate 10s of volts (up to 60 in this case), and such voltages are generally not welcome on the power contacts of delicate silicon circuits. So the PMIC must bring this down to a friendlier 2.5 V.

The following diagram shows the whole system (with “ESH” being the harvester). CIN holds up to 60 V; COUT around 2.5 V.

(To be clear, this circuit comes from a paper Imec did on a tire pressure measurement system that used a different harvester. But it still applies to this project as well.)

There are at least two critical ways in which power has been minimized in the PMIC. One is the use of sub-threshold design, which, while difficult, can have an extraordinary impact. The second is done through judicious use of sleep modes.

The power management measure-and-report sequence looks something like this:

This can be summarized by the following image. I used a measured power graph from Imec and overlaid atop it a timeline of what’s on and off when for easy correlation. 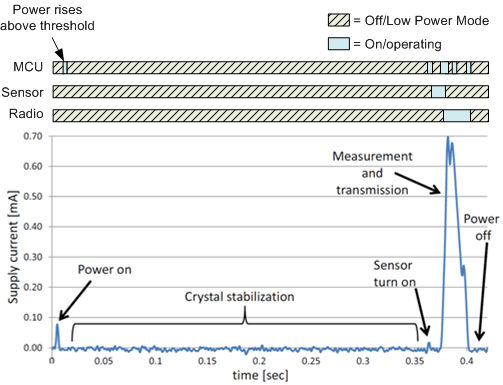 The PMIC itself dissipates less than 10 µW during full-up operation.

But then there’s startup. At that point, there’s not enough power to run the entire PMIC (much less the sensor node). So it goes into “direct charging” mode, where it simply squirrels away the charge on the cap until it has the necessary voltage to proceed further. During this time, the PMIC draws only 50 nA.

Once there’s enough power (2.2 V), then the system goes into “discontinuous mode” with maximum power point tracking (MPPT), which adjusts the conversion in real time for maximum efficiency.

So that’s the essence of their system, leaving out, of course, the specifics of the conversion circuits. This unit needs no batteries for backup – chargeable or otherwise. That eliminates the need to change batteries (Imec suggests that even rechargeables may actually need replacing every couple of years). And there’s no environmental impact from battery materials.

*With apologies to readers not familiar with the US’s flavor of “football”… in fact, “handing” off would seem to have no logical place in a “foot” ball game…

9 thoughts on “A Self-Sufficient Sensor Node”