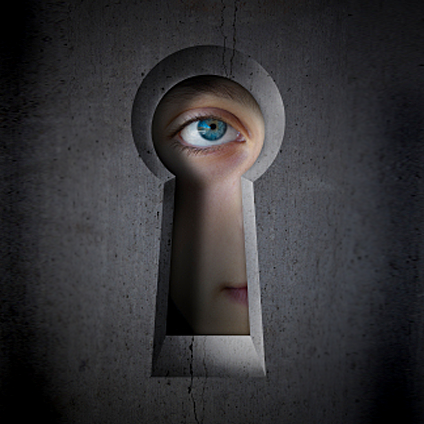 Pandora Walks Into a Bar...
by Kevin Morris

John was up earlier than usual. The body monitor he wore on his wrist had awakened him during the perfect phase of his sleep cycle and told him that his heart rate and respiration were slightly elevated. It was almost certain – even though he exhibited no symptoms – that he was coming down with the flu. John’s smart phone also gave him the news, telling him additionally that he should not go into the office today in order to avoid infecting others. He was further informed that he had likely been exposed to the flu two days earlier while riding a commuter train – by the ten-year-old boy he sat next to. That boy was now mid-stage flu with a temperature of 102.1 and he was the 1,035th person confirmed with this particular strain. Antiviral medications had been ordered automatically for John, and they would be delivered by courier to his home within a few minutes. John’s wife and children had already been informed of the situation and had donned face masks for the remainder of their time at home this morning.

With predictions of over a trillion sensors deployed worldwide within the next few years, a scenario like this is not hard to imagine. In the near future, it is highly likely that most of us in the civilized world will be monitored by sophisticated arrays of cheap sensors, cameras, and other electronic devices during just about every aspect of our mostly-mundane lives. Furthermore, this data will be uploaded to gigantic server farms where it will be stored, aggregated, and correlated. Within the substantial error margins of our electronic devices, mankind will know more about our own day-to-day existence than has ever been known in the history of the world.

This combination of sensors, internet-of-things, and big data will create a revolution on a scale similar to the advent of the internet itself. The potential upside benefits are almost unimaginable – less disease, reduction of accidents, elimination of crime and corruption – healthier, happier people populating a more sophisticated and informed planet. This vast intelligent array of monitoring devices will give us an enormous dose of the truth – on a scale we have never experienced before.

The major casualty in this revolution will be the archrival of the truth – our privacy, secrets, and lies.

As a thought experiment, imagine a world with this taken to the extreme – where every action of every person on the planet is known, every bit of information available, not just to a government, some authority, or nefarious ne’er-do-wells – but to anyone and everyone who wants to know – Absolute Zero Privacy. Obviously this is a potentially terrifying notion, as most of us can hardly bear to even consider having our entire lives laid bare – our deepest darkest secrets illuminated for the whole wide world to peruse.

Fast forward, however, to a time beyond the inevitable initial chaos. Transport yourself to a world where it has always been this way. Where every action of every person has been observed and accurately recorded – for the entire duration of their lives. Where the notion of lying is absurd, and the role of criminal justice is simply determining whether one’s actions fit the definition of a particular crime. Our behavior would be dramatically different in such a reality, where the idea of “not getting caught” never enters our heads. Actions would have a one-to-one correlation with consequences with no roll of the dice built in.

At first, it might seem that such a world would be a paradise for stalkers and thieves- with so much information so readily available, but ironically stalkers and thieves rely even more on anonymity than their victims. The game would be changed with mutual transparency, and much of the means for what is likely a culturally-derived phenomenon would likely disappear.

It is almost impossible to picture how different life would be without the need or the possibility to guard secrets. No longer would we be comparing our behaviors and proclivities against some imagined standard of normalcy, but instead against the stark background of reality. There would be no more holding politicians hostage by threatening to disclose behaviors that might be seen as abnormal. Everyone would already know what that person had done – and just how normal or abnormal those activities were. Scandal might be replaced with understanding and generous apathy. Hypocrisy might fade from the lexicon.

While this might seem like some far-fetched scenario from a bad sci-fi novel, we here in the US have Edward Snowden to thank for reminding us just how fleeting our illusions of privacy may be. Living in the modern technological world, our secrets are fading rapidly – whether we like it or not. We are also reminded how complicated and conflicted our social response to such change may be. We are aghast to learn that our government saves records of all our phone calls, yet we have been perfectly comfortable for decades with the notion that AT&T, T-Mobile, Verizon, and other corporations retain that information. Why do we implicitly trust those companies so much more than a government ostensibly “of,” “by,” and “for” “the people”? Privacy is an odd asset.

Turning to our fiction for answers – “1984”, “Minority Report”, “Invention of Lying “(just to throw a spectrum out there) – we find a common theme of a sanctity of secrets. Our species and our culture seem to value privacy, secrecy, and even lying in a very primal way, and we guard it jealously – even in our imagined alternative worlds. Although seldom enumerated, we defend our “right to lie.” We want to be able to say, “I was at home sick,” when we were really at the mall or the golf course. It is hard to find a well-painted vision of a future with such aggressive transparency as we may actually face.

The technology that will eliminate our privacy has largely already been created, and it is being democratized and mass-produced even as we speak. The white- and black-hats alike are waiting with anticipation, conjuring up new ways to harness the forthcoming explosive flow of truth. The saving grace just might be our ability to take privacy to absolute zero, for much of the power of information is in exclusivity. There is little value or leverage in knowledge that is universally available.

History has shown us an unwavering three-step roadmap for technology inserting itself into the social fabric. First: Invention. Invention cannot be stopped. With over six billion curious people on Earth, there is nothing anyone can do to stem the flow of invention and discovery. New technologies will be created. Second: Application, where we explore the myriad consequences of our new inventions – both good and bad. Often, our inventions are applied in ways that may have no relationship to the original problem being solved. Once an invention is released into the world, its application is out of the control of its creator.

Finally, we try to agree on some social norms and restraint for long-term integration of our invention. Whether we are talking about the atom bomb, peer-to-peer file sharing, or genetic engineering, we have seen time after time that we cannot stop technology from being created, we cannot easily anticipate the positive and negative applications of new technologies, and we always seem to be working out the social and ethical issues surrounding a new technology long after the fact.

It is this final step that will be critical in the sensor-driven, big data deluge that is coming down on our collective heads. We engineers have just unleashed something with almost unimaginable power. Now the world has to figure out how to handle it.