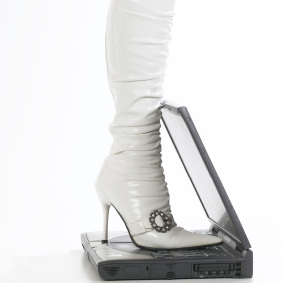 Do Electric Sheep Dream of Androids?

This week, people flocking to the Consumer Electronics Show (CES) will be treated to their first look at a new kind of PC that dual-boots Windows 8 and Android. Imagine, a machine that runs Windows one minute and Android the next.

Sounds like the worst of both worlds, if you ask me. A triumph of marketing over engineering. The coppery taste of desperation has replaced product innovation.

Nobody’s saying anything official yet, so there’s a bit of speculation baked into all this, but the concept is pretty straightforward. Take a Windows 8 computer (please), and load an x86 port of Android onto it. Let the user toggle back and forth between the two operating systems by tapping the screen, making a swipe gesture, or using the keyboard – whatever. Voila! You’ve got both Windows and Android at your fingertips, with the vast software libraries of both at your command.

Intel is understandably excited about this. In fact, the rumor is that Intel has been behind its development all along, for obvious reasons. The faster Intel can un-hitch its wagon from Microsoft’s operating system, the faster the chip company can start to regain market share.

In contrast, Microsoft is just as understandably not happy about any of this, for equally obvious reasons. Loading Android onto an otherwise pristine Windows 8 machine might suggest to customers that there’s something… ah… lacking in Windows. Not good optics. That’s like ordering your chateaubriand with a cheeseburger on the side. You know, just in case.

Strangely, Google is reportedly not happy about this mashup, either. Why not? Google’s been getting some stick lately for allowing Android to fragment too much, and these dual-boot PCs could make that situation worse. Even though Google can’t actually prevent anyone from building Android-based systems – it is open-sourced software, after all – the company can make life difficult nonetheless. The Google Play app store, for example, doesn’t have to work on your device if Google doesn’t want it to. Amazon managed to construct its own app store for Kindle, but few other companies could pull that off. Thus, device makers rely on Google’s largesse, or at least its benign neglect, to survive.

Which just leaves the users. Oh, yeah, that’s right; the people who will be buying these machines. What do they get out of it?

Not a lot, as far as I can tell. Sure, you get an untarnished and fully functioning version of Windows 8.1 on your machine, for what that’s worth. The data show that sales of such machines have been lackluster. In fact, sales of Windows PCs dropped by more than 10% between the middle of 2012 and the middle of 2013. That’s the biggest decline in the PC business since, well, forever. It’s also the only time that PC sales have declined and not bounced back a few months later. It looks like PCs are genuinely edging toward the abyss.

But dual-booting Android makes up for that, right? Maybe not. As many mobile phone users have learned, not every Android app runs on every Android system. So there’s no guarantee that dual-boot machines will run most/all of the Android apps people want. And if Google decides to slow-walk support for Google Play, that could shorten the list considerably. More troubling, customers probably won’t know what apps run until they’ve bought the machine and brought it home, at which point it’s too late. Shades of Windows RT <shudder>.

Finally, there’s the “not a novelty” factor. This isn’t the first time that Windows and Android have cohabitated on the same machine. It’s been done before – and failed. There just doesn’t seem to be enough practical value in it for customers to want to make the plunge. Adding Android doesn’t make a Windows tablet any cheaper, obviously. At best, the price stays the same, and Android adds some incremental incentive to buy one brand’s hardware over another brand without the Android option. But it’s unlikely to make you rush out and buy a Windows 8 tablet you didn’t already want. There’s a word for free software that comes bundled with a new PC. Most people call it crapware.

Besides, if you want to run Android apps, get an Android machine. It’s a lot cheaper. If what you really want is the spectacle of running Android apps alongside Windows, you can already get that, too, by using BlueStacks. It allows you to run Android apps on Windows systems, sort of like Parallels does for Macs. It’s a brilliant piece of software, but it’s not galvanizing PC sales. If what you want is access Android apps, buying a new dual-boot machine is just about the most expensive way to accomplish that.

Still, it’s a logical move for Intel, a potential fiasco for Microsoft, a political minefield for Google, and a desperation play for PC makers. And a great source of entertainment for attendees at CES.

One thought on “Do Electric Sheep Dream of Androids?”