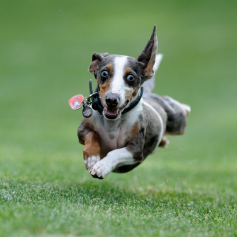 Everybody’s seen one of those hyper dogs. You know, the little yappy ones that greet you with an intense, boundless energy, spinning like a furry maelstrom and wagging their tails so hard you wonder how they stay attached? And you’ve doubtless heard someone say something like, “Wow, if only we could harness that energy, we’d solve the world’s problems.” Heck, harnessing even the tail would be a monumental start.

Of course, we’re nowhere near doing that. But if we could coat that dog’s tail with a piezoelectric material, we could create some serious sparks. And while we’re a long ways from that too, you could consider a more recent approach to be that of a micro-tail: it’s a MEMS cantilever wagging in response to mechanical vibrations and transforming that energy into electrical energy.

Now… a cantilever is far less cuddly than a Cocker Spaniel, but heck… it also doesn’t make a mess on the carpet if properly trained. So it’s a start.

But things aren’t quite as simple as they might seem, and the answer chosen for this technology was not the obvious one. Let’s review: the piezoelectric effect causes strains and deformations of certain materials to create an electric field. This happens because of an asymmetry in the crystal lattice such that the strain creates electric dipoles that don’t cancel each other out. So you get a net electric field. And from that you can coax charge out of the material.

Loosely speaking, the amount of charge you get for a given amount of mechanical strain is determined by the coupling coefficient. This is an intrinsic material property, and it’s different for different substances. Obviously, having a higher coefficient would seem to be a good thing.

The other important point about piezoelectricity is that it has symmetry. If you strain the material, you induce a voltage. Conversely, if you apply a voltage, the material will deform or be strained. It works both ways. In a sense, it acts like a lever.

Let’s imagine a lever on a fulcrum. We will try to move one side of the lever and assess the response on the other side. The question is, which side do we move? And that depends on what we’re trying to accomplish. Obviously, if the fulcrum is in the middle, then it doesn’t matter – there’s complete symmetry (and no multiplication). That’s boring, so we’ll move right along.

Let’s assume the non-trivial case where the fulcrum isn’t in the middle. Let’s say you’re pushing on the long side of the lever. Now your force is multiplied, and a little effort and a lot of motion on the long side give you smaller motion but more strength to lift something heavy on the short side.

Piezoelectricity has a similar characteristic. It’s often used for actuation, where you apply a voltage and the material responds with mechanical movement. In that case, you’d like to get the most movement possible for the least voltage. But what if you’re harvesting energy? Now you’re on the other side of the fulcrum – and a lot of movement (in the form of strain) will create a small voltage.

For harvesting lots of energy, you’d really like the reverse: you want a little movement to create a large voltage. So a material that might be ideal as a piezoelectric actuator is not ideal as an energy harvester. And vice versa.

Meanwhile, one Robert Andosca was doing a PhD thesis. And an important outcome of that thesis was the potential for AlN (aluminum nitride) to be a useful piezoelectric material for energy harvesting. It’s a substance that was generally considered inferior to the more traditional PZT – lead zirconate titanate, having a lower coupling ratio.

But it turns out to have a more favorable dielectric constant, which more than compensates for the coupling coefficient. The resulting voltage response based on the ratio of the coupling coefficient to the dielectric constant is 10 times better for AlN than it is for PZT. And, because power goes as the square of the voltage, that makes the power response 100 times better.

And so this is the basis of his company MicroGen, which has been dribbling out news as its technology progresses. Now… you might say, “But wait! Imec already did this with AlN, so this isn’t original!” And Robert’s response would be: “Yes, I knew this information when they published that AlN was as good as PZT in the 2008/2009 timeframe.  Yet, I was trying to keep this information a trade secret for MicroGen.  In 2012 I finally published my PhD dissertation stating that AlN is better than sol-gel PZT for vibration energy harvesting.” He says that, prior to that publication, the Imec work actually built internal credibility for what MicroGen was doing.

Right now, MicroGen is using a 1-µm AlN film. But, because the delivered power is proportional to the thickness, their next move is to 3 µm and thence to 4 µm. Why the interim step? Robert said that, first of all, it’s a measure of caution – don’t take too big a step. Plus, process folks like to move incrementally. And, once the interim step is done, moving to 4 µm can more or less be done for free.

He also notes that this size of their cantilever is distinct from what he calls “big MEMS” – where you might measure in units of mm, not µm. It’s a much smaller device, and he thinks it will get them to the price targets they want to hit.

Part of the key here is to identify the appropriate frequency for resonance; this will depend on the target application. What they have now targets 120 Hz (±2 Hz) – which is double the AC line frequency here in the US. (They would target 100 Hz in Europe.) This allows them, for instance, to put the harvester on a light ballast or microwave oven and generate power based on the subtle vibrations generated by those devices.

How subtle? How sensitive? That comes from the cantilever design. They say that there are some vibrations that can exceed a 0.5 G limit; 0.1 G sensitivity will let you detect most vibrations, and going all the way down to 0.05 G gets you access to pretty much anything in the industrial environment.

Given suitable performance and cost, the next obvious questions would be, “How reliable is it? How long will it last?” After all, the whole reason many folks will use something like this is so that they can avoid going out and changing batteries in some God-forsaken place. Having to go out and replace the energy harvester doesn’t improve matters.

They’re busy answering that question now. When we talked at the MEMS Executive Congress, they had initiated the effort within the prior 3 months, and so far, well, so good. They’ve had one device running continuously since February without failing. Their goal is to prove a 10- to 20-year lifetime.

So it may not be quite the same as getting energy from a Retriever, but if you have one of these working for you, well, imagine the cantilever wagging away like a dog’s tail. And just figure that the thing is really happy to see you.

[Editors note: The article was edited to clarify and correct the relationship to the work done by Imec.]

One thought on “Wag the Cantilever”