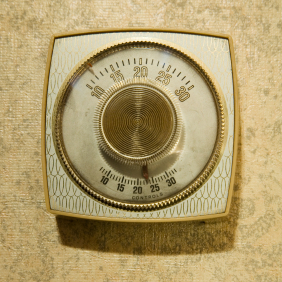 Deconstructing the Internet of Things
by Bryon Moyer

Not long ago we covered the launch of Ayla Networks, whose goal is to simplify creating the Internet of Things (IoT). It sounded straightforward enough at the time.

That article spawned some further discussions that brought to light both the fact that there are a bunch of companies doing bits and pieces of this already and the fact that this isn’t as simple as you might think. And frankly, it’s really quite difficult to figure out what some of these companies are doing. They all sound more or less the same at the top level (“We help you to build the Internet of Things”), but they’re not. They can be stingy with information – some of the websites seem practically hipster with their vague promises and almost no detail (“It’s really obscure technology; you probably wouldn’t understand it”). (I also found the one with the least detail was also the one that didn’t respond to my questions…)

So I wanted to come back to the topic and add some levels of nuance to the deceptively rosy view that might have been derived from the Ayla piece. My goals are two: try to generalize an architecture for the IoT and then look through some example companies and show what they do within that structure.

To be clear: this will not be definitive nor will it be exhaustive. There is no defining architecture at this point, so the best I can try to do is simplify and generalize what I see going on. And I don’t think there’s any way I could be exhaustive; there’s a lot going on, and I would expect it to change constantly. So even if I could find an end to a search for more companies I had never heard of, that tail end would soon be obsolete.

So my goal is to give a more detailed flavor of the pieces of the IoT and how they’re being provided in order to help you to understand the various options and approaches out there. Before they’re out of date. To be clear, there’s lots more detail under this level. I won’t be going there. This time, anyway.

As I noted in my earlier piece, there are lots of little things that have to be managed to get Things to talk to the Cloud and thence to other Things or Phones or Computers. So, in an effort to generalize the picture, I have broken everything down into five elements (and, conceivably, you could say four): Things, Hubs, the Cloud, Phones, and Computers (Phones and Computers could realistically be combined as Terminals, but I’ll leave them separate). They’re shown in the figure below.

The players in this scene are the folks making Things, whom I unmysteriously refer to as ThingMakers, Cloud Providers – guys like Amazon, and IoT merchants/vendors – the folks that are selling pieces of infrastructure to help in the IoT build-out. 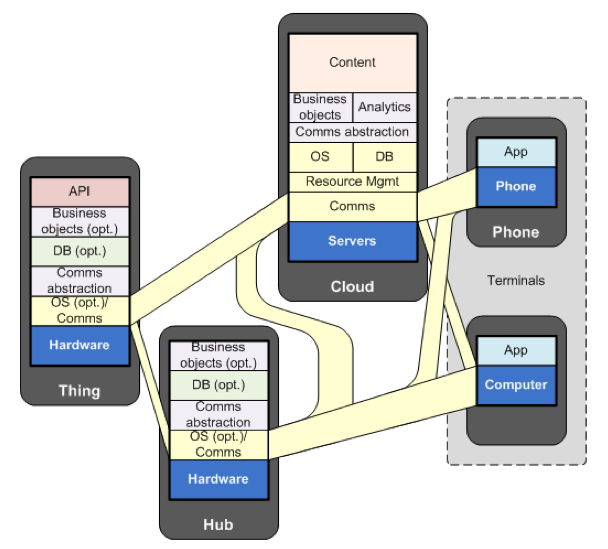 First comes the Thing. Obviously, this covers a huge range of possible devices with different levels of complexity and power. One could be extremely small, with minimal computing and less memory; another could rock a sizeable processor and be able to host an embedded relational database.

You can argue whether this stack is strictly correct (Is the API really on top? Should it go sideways at the portal?), but it suffices for our discussion (feel free to opine in the comments). And any specific Thing may differ from this general view. So don’t take it too literally.

As we’ll see, some systems allow a level of local interconnection without going all the way to the Cloud: they provide a local Hub instead. Zonoff is a company that follows this model. In a completely connected house, for example, they observed that a smart light switch that has to communicate with the Cloud to operate will work too slowly (not to mention the fact that internet connectivity isn’t ubiquitous or reliable enough yet for such mission-critical features).  A Hub in the home allows response fast enough to let the light switch operate at the speed we expect.

I show a Hub as containing potentially all of the pieces that a Thing has, except for the API part. Yes, there will be low-level APIs for communications and such, but the API I’m referring to in the Thing is the abstraction of Thing functionality. A Hub isn’t a Thing, so it doesn’t have Thing functionality, so I’ve omitted that API block.

A quick note on APIs, by the way, since there can be a lot of them. Much of the business logic, whether done on the Thing or in the Cloud, is executed on a virtual machine (VM). I had a hard time deciding where to put the VM in the figure – at some point you have to start being accurate about what’s over what, and I don’t want to overstate the accuracy of the stacks I’ve drawn. So I’ve left the VMs out, but bear in mind that providers often include those as part of their abstraction infrastructure.

Some of the vendors provide a Platform as a Service (PaaS) model. This includes everything that you need (or that they think you need) for the Cloud, and you’re working in a “protected” environment.

Over on the right of the drawing are the Terminals, simplified as phones and computers (desktop, laptop, or heck, even super). Tablets would fit somewhere between; that fight is obvious and left to the reader. Some companies provide frameworks for writing apps in particular, although writing the app (or application on a full-up computer) remains the job of the system designer (typically a ThingMaker). The main question is the level of abstraction and the libraries available for making it easier to do.

Picking Up the Pieces

Given all of these pieces of the IoT, what are the options for putting it all together? Well, it depends on how much you have already assembled. Some companies try to be comprehensive; others try to focus on a selected part, like databases or communication abstraction. I have identified a few companies to use as examples; I’ll summarize what they do and then try to bring it all together in a Mother of All IoT Tables. Okay, maybe not Mother; perhaps Aunt or Uncle.

The following table attempts to show which pieces from the drawing above are covered by which companies. At the very bottom are the things that either the Cloud provider must handle or that the ThingMaker will have to create. Note that, absent all of these offerings, the ThingMaker would have to do everything. So, for the ThinkMaker row, I’ve focused only on the things that have to be done even given a rich offering of IoT pieces. 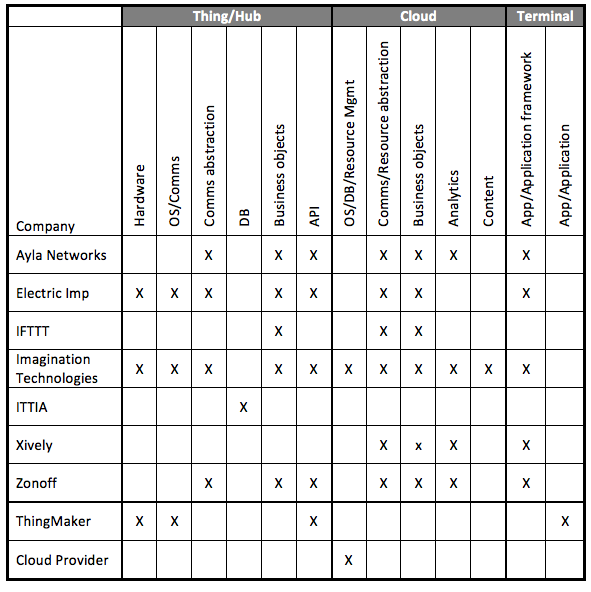 It also bears noting that you will often hear that there are no standards for the IoT. Well, depending on what you’re talking about, that may or may not be true.

At the low levels, there are tons of standards. And in some cases – take HTTP, for example – it may not be obvious how they fit into the function being performed. But at these low levels, everyone is following protocols that already exist – trying to define new ones would slow development dramatically. And yes, you may be doing things that weren’t envisioned when HTTP was first devised, but it’s a good way to communicate with internet-related systems, since all browsers understand it. So it and the many communications standards are leveraged to the hilt.

Of course, not everyone thinks the low-level stuff is good to go. The MEMS Industry Group recently hosted a webinar where two new additions to the panoply of wireless network sensors were laid out. One is OpenWSN and defines a stack starting with 802.15.4e-2012 for timeslotted channel hopping, moving up to 6LoWPAN, RPL routing, UDP, and CoAP (Constrained Application Protocol). Missing in that stack is a scheduling standard for assigning time slots and channels; 6TSCH is proposed to slide between 802.15.4e and 6LoWPAN for that purpose.

But at the top layers – APIs, business logic, protocols for sending semantic-layer messages between Things and the Cloud and Terminals – it’s wide open. Lots of folks doing things their own way. Zonoff mentioned that many businesses prefer it this way – standards would lead to the commoditization of the technology.

And it’s probably fair to say that, at this point, while the technology is shaking out and everyone is experimenting with the best ways to do things, leaving it open for unconstrained exploration is probably a long-term good thing for technology. It’s also, of course, a good thing for providers, since it allows them to create walled systems that won’t interconnect with other systems – you’re locked in (either as a developer or as an end consumer). And businesses like it when you’re locked in (there’s a fine line between “sticky” and “stuck”).

But I see this evolving in the same way that the internet did. In the early days, when things were wild and wooly and scary for your average computer non-geek, having a walled garden such as that provided by AoL was a good thing. But eventually, the streets got cleaned up and browsers started to find better ways to present the content and ward off questionable interactions (largely a security thing), and so the people in the walled gardens started to see other people playing in the streets and, ultimately, they wanted to go play there too.

Likewise, for now, these IoT walled gardens can help an intrepid developer to get things done more quickly – at the cost of buying into a particular system. But sometime in the future, I see folks – consumers not least – getting more restless. So attempts to harmonize some aspects of this high-level stuff are likely in the offing, but not for now.

That’s my meager attempt to deconstruct the pieces of the Internet of Things in a more nuanced fashion than we’ve done in the past. As specific topics in this area arise, we’ll come back and deconstruct yet further. Feel free to suggest alternative ways to organize this stuff.