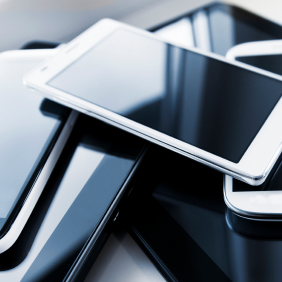 The Quiet Shift in Semiconductor Conductors
by Kevin Morris

Nice job folks! Over the past few decades, we electronic engineers have created social change so dramatic that previous discontinuities like the Renaissance, the Industrial Revolution, and two world wars pale in comparison. Nothing in human history can rival the technological progress that has been achieved in electronics and the impact of that progress on civilized life.

We go to work each day, month, and year – and our baseline assumption is exponential improvement. Think about that a minute. We’ve all taken math (lots of it, in this profession). Exponentials in the real world are never sustainable. Yet, we work away in our jobs expecting the number of transistors on a chip to double every two years, just as sure as we expect the sun to rise in the morning. Biennial doubling of capability is reduced to status quo.

This is an illusion, of course, and this thinking forms the basis of further illusions that can lead us down odd and sometimes incorrect paths. For example, most of us think of Intel as the biggest driving force in semiconductors. It’s been that way for decades. Intel is a big deal because computers are a big deal, and Intel makes the processors for them. Computers are a big deal because they connect everyone to the Internet.

Not really. We’ve all watched the explosion of mobile devices on the scene the past few years, but few of us have walked back through our chain of assumptions to see how that affects our design work – even if we’re designing in a space that doesn’t seem related to mobile or computers at all.

Let’s walk backward through that stack. Most citizens of the modern world are connected by the Internet. Today, however, mobile devices have replaced conventional computers as the dominant means of connecting to that Internet. Literally billions of mobile computing platforms of various types are connected, and that number is growing each day. That means the economics of the semiconductor industry is now driven not by the old Intel-PC-Internet triad, but by the needs of mobile devices.

To understand the implications of that fact, we need to consider the requirements for mobile design that differ from the traditional drivers of semiconductor evolution. In the past, performance ruled. We made whatever compromises were required to get a few more MIPS. Cost, power, and performance were all key requirements, but performance was the king. When push came to shove, we’d compromise the other two if it would give us an edge in the big one.

Of course, we didn’t often have to compromise. Each new process node practically doubled all three of these elements, so we could easily sit back and just enjoy the ride. We were spoiled. Then, however, the Moore’s Law mountain steepened. Being spoiled, we got cranky. We didn’t want to choose between doubling our performance and halving our power – and, cost was supposed to be half, that was a given, right?

We threw our little engineering tantrums, stomped out of the room a few times, and then went back to work doing what we were actually trained to do. We made compromises. We traded off power and performance based on our application requirements, and since performance had always been king, most of our compromise went in that direction.

Then, more bad things happened. Things that had always been ignorable, sunk-cost constants began to be the main problem. For example, dynamic power used to be what we worried about. Sure, our circuit would leak a little, but real power was burned by toggling transistors. Our design-for-power methodology therefore focused on dynamic power and trying to reduce the number of transistors that toggled and the power expended on each of those transitions. Ever so quietly, our transistors began to leak more. Soon, while we weren’t looking, leakage current became the big power problem.

Likewise, silicon area had always been the big cost issue. We did everything we could to make our chips smaller, and that meant more of them could fit on a wafer, and that meant lower cost. With each new process node, however, our non-recurring-engineering (NRE) costs rose. Those costs amortized over our production volume, and before we knew it – NRE was the dominant factor in cost.

Performance was not immune to the effect, either. For decades, we got more performance by making our transistors switch faster. Megahertz gave way to Gigahertz and our designs whizzed along at amazing clock rates. Before we knew it, we had a whole different direction to look for performance – not by continuing to increase toggle rates, but by widening our designs into more parallel structures.

The combination of these three fundamental shifts coincided with mobile’s emergence as the big economic driver of new semiconductor processes. There was more cash available for optimizing mobile than for big-iron, wall-powered, fan-toting computers, so mobile got the benefit of the heavy engineering investment. Mobile devices put power at the front of the list. Battery capacity, size, and weight were key considerations in system design, so anything that could reduce power consumption was a triple win. Performance-tuned, heatsink-wielding, gigahertz-toggling chip designs gave way to clock-gated, leakage sparing, highly-parallel, unit-cost-optimized devices that would win in the mobile environment.

No matter what type of chips you buy, you are affected by this shift. Everything is mobile-biased. Even the processes used for the biggest, fastest, most expensive, most power-hungry FPGAs are fundamentally rooted in the values of mobile device design. At the 28nm process node, it didn’t matter as much. Merchant fabs like TSMC had many variants of their process technology – each targeting a different type of application. Starting with 20nm, however, the fun is over. The cost and complexity of making even a single process variant work correctly is so high that multiple variants are pretty much out of the question.

We have a clear path down to 14nm and even 10nm, but then the crystal ball gets fuzzy. If mobile is our target/reference application, it is most likely economics rather than technology that will call an end to our five-decade dance with Moore’s Law. It seems most likely that, when that breakup comes, it will be mobile applications that will be by our side watching the end of modern engineering civilization – and hopefully observing the beginning of a new one.

2 thoughts on “Mobile Drives Everything”