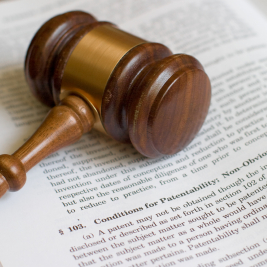 Next week I will be at the three ring circus that is the embedded world trade show in Nuremberg, Germany. My diary is packed with meetings and even the odd social event, and next month I will be covering the main stories.

In the run-up to the show, my attention has been caught by the different approaches to life between the people I will meet in Nuremberg and some recent stories around technology and ownership of companies and intellectual property. One trigger for this is my slightly bemused observation of the American habit of reaching for a lawyer at almost any possible opportunity. I am not talking about the set piece matches between corporations. These seem to have reached the stage of rites of passage – you are not a great big grown up company unless you are suing and being sued. You climb into your armour, ride off to the lists and go through the manoeuvres that are laid down in the manuals of chivalry. There is a certain fascination in watching the money running out through the court-room doors of the world as, just to take one very high-profile example – Apple and Samsung seem to be behaving like Tweedledum and Tweedledee before the monstrous crow appeared.

Then there are the patent trolls – companies that exist, not to do anything useful, but only to acquire patents and then sue anyone who looks as though they are even remotely infringing them. Frequently it is easier for the company being sued to simply pay up and live with the extra cost than to send their lawyers out to do battle in a very unpredictable court system. This has changed a little recently when an online retailer, Newegg, decided not to pay up for e-commerce tasks including shopping carts and on-line check-out, unlike other big on-line retailers. Instead, it fought the case brought by Soverain Software. After losing at the first stage, Newegg won on appeal, and the same court also dismissed Soverain’s other cases, said to have included claims against companies like Home Depot, Best Buy, and RadioShack. Similar companies to Newegg exist in the embedded area, but it is worth pointing out, on grounds of fairness, that not all companies who assemble patent portfolios are trolls.

But the real fascination is the class action, those try-ons where a lawyer persuades a group of people to sue an individual or company for some perceived failure in corporate governance or probity. The lawyers usually work on a percentage (a high percentage) of the final settlement. Again, companies often find it easier to pay up rather than commit money to lawyers and then hours of senior, often very senior, management time to arguments in court.

A recent example of this is the actions being brought against Lance Armstrong by people who claim they wouldn’t have bought his books if they had known that they were full of lies about doping. And so, they argue, they are entitled not just to have their money back, but also to receive compensation.

A previous and now settled book-related case was that of one James Frey. Frey wrote a book that he claimed was an autobiographical account of his experiences as a drug addict. It turned out that much of it was invention. A class action suit against the publishers was settled for a possible $2.35 million. Only around 1,700 readers asked for their money back (retail price $14.95), even after an extensive marketing and publicity campaign paid for indirectly by the publisher. But it is reported that the lawyers involved billed $783,000 dollars – around $450 for each reader!

Now, while class action suits over books are bad enough, with the potential to damage established publishing companies, a real company killer is class actions from shareholders. If you search on the web you will find lawyers in Canada and the United States who specialise in identifying possible cases and then effectively advertise for people who own shares in that company to join in the class action. They normally then file a complaint against the company for not revealing detailed information and ask for exemplary damages. Virtually every public company has been held to ransom this way, and again often prefer to settle out of court. To try to guard against this, public statements are usually surrounded with careful caveats – the one that accompanied the latest Cadence financial report ran to nearly 400 words in an attempt to close off all possible loopholes. But it seems that there are always lawyers who will say, “But you didn’t mention that you might be subject to a plague of frogs in your earlier statements. My clients invested in your company and then, when you were subject to a plague of frogs, you didn’t make as much profit and so your share price fell. Since you were clearly negligent in not identifying the risk of a plague of frogs, my clients are entitled, not just to compensation for their losses, but also you should pay them additional money as a punishment for your negligence.”

Sometimes the complaint isn’t that the shares have lost money; rather that they haven’t increased as much as they should. While several moves in the United States have tried to reign in these cases, including a law and Supreme Court rulings, there are still a number of them filed each year.

An interesting series of legal cases seems to be building up against Apple. These are being brought by individual shareholders who, not content with the huge gain in the share price they have seen over the last few years, want Apple to give them a large chunk of the cash mountain that the company has accumulated. At the time of writing this has been dismissed by Tim Cook, CEO of Apple, as a “silly sideshow” but it is still a sideshow that will cost money and require Apple’s executive team to spend their energies on the case – energies that might be better devoted to beating Samsung, not in another court room, but in the market place.

Interestingly, the shareholder who opened the war on Apple is David Einhorn, who runs a hedge fund, Greenlight Capital. Greenlight specialises in short selling – i.e. selling shares they do not own in the hope of being able buy them back later as their price falls. This is, of course, perfectly legitimate.

A different way of taking money from companies is practised by private equity companies. These buy publicly quoted companies, often for mind-numbing sums of money (Freescale was bought for $17.6 billion). They load the companies’ balance sheets with a large part of this debt (suddenly Freescale went from cash positive to having $9.5 billion of debt added), making the companies responsible for paying the interest on the borrowings. At the same time, they systematically start dismantling, by selling off or closing down, parts of the company with the hope of making large profits. While this may have worked in other manufacturing fields, the cyclical nature of the semiconductor industry means that this has generally not been terribly successful, either for the private equity people nor the companies they have acquired.

In general, financial institutions still don’t seem to have learned from the recent market collapses, and they are still looking at ever more complex ways to move money around. As well as complex financial vehicles – such as selling on poor quality mortgages in bundles – there are also the complexities of commodities trading. Commodities markets were originally established to even out fluctuations in price; now they are seen as a way of making money by arcane trading programs, which contribute to price changes.  They also add to the final cost. Take petrol (gas). The price at the pump is not just the costs of explorations, recovery, processing, transport, and a reasonable profit, but it also includes an element for trading. A cargo of oil moving from the middle east to a refinery may change hands, in theory, several, or even many more times, before it arrives at the pump.

I think what I find unsatisfying about this overall situation is the sheer amount of human ingenuity that is going into trying to take money away from companies rather than in building companies that make useful things.

On the other hand – as I said, next week, if you are reading this on publication day, I will be at embedded world. There I will be meeting people who see a company as a vehicle for taking ideas and making them useful. In Germany there is a strong tradition of what they call the Mittlestand – small and medium sized businesses, often family owned and run. These are not just Mom and Pop companies: 70% of all Germans working outside the state sectors are working in the Mittlestand. The companies are often tightly focused and can be major exporters: in a wide range of sectors, from tropical fish-food to dog leads and specialist machine tools, Mittlestand companies are the world’s number one. At Nuremberg will be a number of Mittlestand companies, in amongst the familiar international giants. Many of them see commercial success not just as a way of getting cash, but as a vindication of the good idea on which they built the company. Profits are valuable, but they are also a way to fund working on even more good ideas.

And while there are inevitably some flaky ideas, as you walk around the crowded exhibition halls, you see companies coming up with tools and products that make life better – which feels good even when you are worn out at the end of the day.

3 thoughts on “Lawyers, Bankers and Engineers”