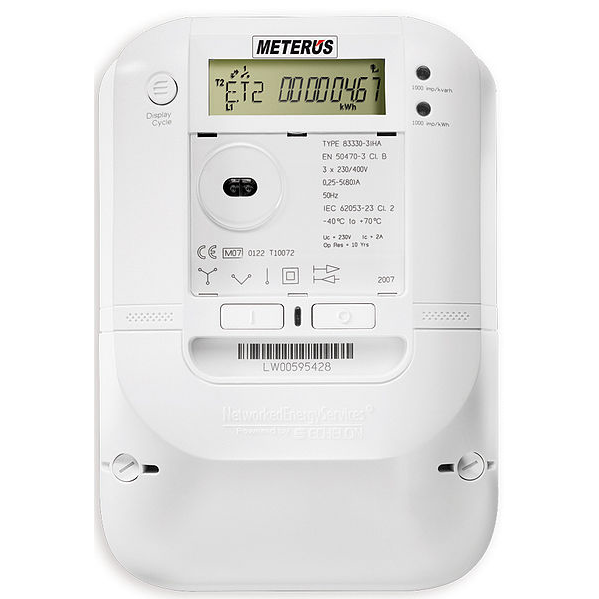 Freescale In Your Smart Meter

There’s a building out back behind where I live that has an electric meter on it. While that’s not unusual, what is different about it is that it’s an old-school version. One with a spinning wheel. It has survived the local conversion to smart meters not because of any protest (common around here), but because it’s actually a sub-meter; the main property meter is now digital. This one hasn’t been read by a meter reader in many years. (Which is good for the utility, because, as far as I can tell, it runs backwards.)

Before writing this, I went out to have a look at this historical relic. There’s just not much to it: most of it is structural metal bulk that covers whatever mechanism gets the wheel to run. The rest is the linkage to move the needles on the actual meter part. That’s pretty much it. It stands in stark contrast to the onslaught of technology being offered up for the latest generation of meters.

This was recently epitomized by a series of releases by Freescale as a 1-2-3 punch,  followed by a pause to let you to catch your breath and a acquire false sense of safety and then a coup de grace.

The basic smart meter design that would accrue from this technology would involve three Freescale Kinetis microcontrollers and a dedicated tamper-sensing device. The three microcontrollers were announced in October; the tamper-proofing came out this month.

The devices announced in October divide up the smart-meter duties into three buckets.

First, there is the metering itself; it’s the new Kinetis M series (KMxx). The focus here is on accuracy and low power. The device has a complete metering analog front end that attaches directly to the line. (It’s fair to say that there aren’t a lot of things that we discuss here that can be plugged straight into 110 or 220 volts…) Behind that is a Cortex M0+ core, lots of the usual communications blocks, and timing, power management, and tamper detection bits.

The communication on this chip is largely of the local chip-to-chip type: SPI, UART, and I2C. All wired, all serial. Just for local data hauling. For communicating wirelessly, there are two other devices for two different communication directions: outward and inward.

Outward communication is for relaying information back to the utility. Exactly how this is done can vary dramatically by region (and it isn’t even always done wirelessly). Where the airwaves are the medium, there are varying architecture options for aggregating and concentrating the data; think of it as smart grid backhaul (without a convoluted business model).

Freescale has put forward their Kinetis KW01 to handle this. The device is also intended for communicating energy management information within a premise or industrial plant, with various sensors and displays talking with the meter. Communication distance is on the order of “several” hundred meters.

Because the frequency and protocol requirements vary according to where the meter is being deployed, flexible communication is a key focus for this device. It has an RF block for sub-GHz communications, supporting the 290-340-MHz, 424-510-MHz, and 862-1020-MHz frequency bands. It can also handle a wide range of modulation schemes.

The core is again a Cortex M0+, and the usual peripheral blocks abound. In fact, if you sort of squint your eyes, this looks much like the KMxx with the analog front end removed and the RF block put in instead.

Inward communication in the home setting is handled by yet another device, the Kinetis KW20. And the main feature here is ZigBee, but in particular, the ability to operate two personal area networks (PANs) at the same time.

The thinking here goes that there are likely to be two specific networks going for two different purposes and – critically – controlled by two different entities. The obvious one is your own home network (likely ZigBee Home Automation), which you can use to connect appliances and home entertainment devices as well as plugs, displays, and the meter itself. This is where the promise of the smart home and smart grid accrue to the homeowner: you can control the power usage of the devices in your domain.

The other network (likely ZigBee Smart Energy or RF4CE) would be the one controlled by the utility. [Cue evil empire music.] This is where they can gather information and implement some controls of their own when they wish.

Ordinarily, a single small, low-power microcontroller would be able to operate only one of these networks, which would make two such microcontrollers necessary in homes where the user is managing a home automation network. By beefing up the controller to a Cortex M4, it has the capacity for managing both networks itself, saving a chip (and its support circuitry).

The radio portion of the KW20 has also been pulled out for separate use with any other microcontroller. As a separate entity, it’s called the MC13242 transceiver.

So that’s three different microcontrollers for your smart meter. One to meter, one to communicate externally, and one to communicate internally (for a home). Interestingly, at least two of the devices, the KMxx and the KW01, have means of detecting tampering. Now, on an old-school meter, there’s a pretty straight-forward tamper-protection scheme: it’s a wire that’s crimped shut and can’t be opened without cutting it.

This isn’t exactly a way to prevent tampering, except to the extent that a homeowner will be easily found out if he or she tries to jimmy the meter in some way. In that sense, being tamper-evident is good enough.

Modern schemes also rely on detecting tampering rather than preventing it outright. But rather than waiting for the meter reader to come around and notice that someone has been monkeying with the system, a smart meter would be able to communicate immediately that something is amiss.

And to help with that, Freescale has announced yet another item for your smart meter: it’s an accelerometer that specializes in detecting a tilt of over 45°. It’s the Xtrinsic MMA8491Q. In fact, smart meter tampering isn’t the only application – any tilt-protection (like an iron falling over) is a reasonable target (and they also promote its use for remote controls).

Ironically (and somewhat confusingly), their smart meter protection reference design uses a K30x microcontroller to handle “all major meter functions.” The prior three devices aren’t even involved. It is also shown being connected to the microcontroller like a standard sensor would be: data over I2C and an interrupt signal. It doesn’t use the tamper pins on the other microcontrollers.

So, whether or not the various divisions are talking clearly with each other, it is evident that Freescale has smart meters on the brain. I have to say that it’s a bit mind-boggling to think of all of the extraordinary technology that goes into these new meters. And then you go out and look at how it used to be done. Granted, the new stuff does more – heck, it’s smart, after all. (OK, most of the new stuff it does is communicate…) You just have to remind (convince?) yourself that this makes it all worthwhile.

One thought on “Freescale In Your Smart Meter”