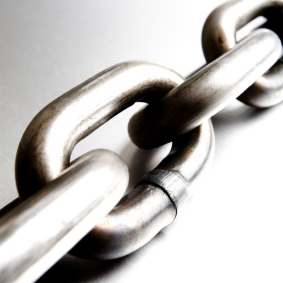 Begging for More Accuracy from your Timing Chain?
by Jim Turley

We’re all slaves to time; some more than others. Come, slave, it’s time to submit to a new form of discipline.

Hardcore readers will recall fondly our November article on Symmetricom, the company that whips time into shape, beating it into submission for the satisfaction of embedded designers everywhere. The House of Intervallic Domination now has a new offering: a GPS Disciplined Oscillator (GPSDO) that is more, shall we say, obedient than standard oscillators.

What’s a disciplined oscillator? Were the other oscillators too… naughty? Perhaps they were, but the electrifying thrill of a disciplined oscillator is the way it maintains its iron-fisted stability under punishing conditions. When your GPS reception is poor, most oscillators succumb but the GPSDO’s “holdover” capability keeps a tight clamp on the clock and frequency signals, administering its mastery over synchronization.

These are board-level products, unlike Symmetricom’s dominant chip-scale atomic clocks, and therefore they appeal to customers with different tastes. “For systems that require an embedded GPSDO… [the modules] reduce design time and risk compared to developing a custom solution,” says the company’s manager of S&M (sales and marketing).

The catalog is studded with a half dozen variations of the GPSDO, so you can get it any way you want it. If you’re on a painfully tight budget, there’s the GPS-500, which uses a 10-MHz oven-controlled crystal oscillator (OXCO) to squeeze maximum performance from a small, tightly constrained space. If that doesn’t satisfy your special needs, the GPS-2000 adds the crowd-pleasing daisy-chain capability and five independent outputs to gratify the most demanding designer.

If you wish to submit to the ultimate in clock discipline, the GPS-2750 is right up your alley. It uses a chip-scale atomic clock, so its output is veritably handcuffed to GPS time, with holdover over a 24-hour period quivering by less than a microsecond. It also bravely endures agonizing temperature extremes from ?40°C to +85°C. All while maintaining a discreetly low profile of just 0.7 inches.

Disciplined oscillators aren’t for everyone. For those who like that kind of thing – and you know who you are – the GPSDO goes straight to the pain points for designers forced to obey strict standards for precision. Symmetricom has worked the kinks out, loosening the velvet rope across the path to high-accuracy timing. Now we can all go hell-for-leather toward the dream of more accurate timing chains.