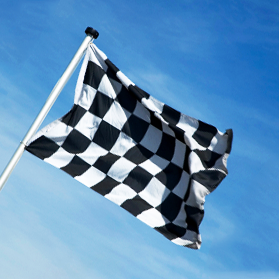 One of the perks of writing about electronics is that you get to see some really cool stuff.  And while motor racing is not at the top of my list of enthusiasms, an invitation by Freescale to visit the McLaren Technology Centre was just too good to pass up. Besides which, it turned my fellow hacks on EE Journal green with envy: there are some real petrol heads, including a race driver and a Formula 1 Fanatic.

The reason for the invitation is that Freescale’s processors are the intelligence in the engine control units (ECU) that McLaren supplies, on an exclusive basis, to the IndyCar, NASCAR and Formula 1 (F1) racing series.

If you are a casual viewer, the race you see on screen is only the tip of the iceberg of the real competition. Back in the old days, in all these racing series, the rules were fairly simple, and there was a feeling that the races were often won – not on the track but in the workshop – a clever engineer would create a car that was unbeatable for a season or so. Over time, the rules on how a car is built have become more and more detailed, with the aim of increasing the safety of racing and of making the spectacle more exciting by having cars that are very closely matched.

We will look at F1 for the moment, which was the focus of the event. The rules for designing an F1 have become amazingly detailed (you can see them at www.formula1.com/inside_f1/rules_and_regulations/), and the development teams have to compete by working within these regulations and by pushing their technology as far as possible. All the engines currently have to be V8s with a maximum capacity of 2.4 litres.

“Turbochargers, superchargers and devices designed to pre-cool air before it enters the engine’s cylinders are not allowed. Nor is the injection of any substance into the cylinders other than air and fuel. Variable-geometry inlet and exhaust systems are also forbidden, as is variable valve timing. Each cylinder may have just one fuel injector and ignition must be by a single spark plug.” (Summarised version of Article 5 of the FIA regulations – which runs to over 3,000 words.)

But, while you are thinking that this looks a little basic compared to the turbocharged beastie you have outside, you then see the other part of the regulation, covering KERS (Kinetic Energy Recovery Systems)

“The only other permitted power source is a Kinetic Energy Recovery System (KERS), which takes waste energy generated under braking and turns it into additional power. This is then made available to the driver in fixed quantities per lap via a steering wheel-mounted boost button.”

The KERS in use are normally based on a motor-generator in the transmission system, which charges a battery pack in normal use and can then add a bit of extra oomph when it is needed. (Other options include a flywheel spinning at up to 80,000 rpm.) The KERS adds the dimension of pushing technology that is so often a feature of motor racing.

The ECUs for the new engines will all be supplied by McLaren through McLaren Electronic Systems, a company within the McLaren Group, and they will use, as we said, Freescale processors. McLaren had previously, starting with the 2008 season, won the contract to supply the ECUs to the current generation of engines, the first where it was mandated that they all use a standard ECU.

The ECUs are packaged in a relatively large wedge-shaped box, which contains multiple PCBs packed with ICs and discrete components. While the assembly area has a state-of-the-art pick-and-place machine in order to use the smallest components where possible, there are also multiple soldering stations where larger components are attached. All joints are reinforced with resin, and the ECUs are subjected to 60g test loadings before being shipped. They are also fully exercised in hardware in the loop set-ups. An ordinary car is notoriously a very hostile environment, with heat, vibration and electrical noise. A racing car is much much worse; yet, despite this, ECUs are performing well, and some have been in service for several seasons.

But the ECUs are only the biggest and most visible part of the electronics. Within each F1 car are around 120-150 sensors. Many of these are feeding the ECU, but others are feeding information back to the garage at the racetrack, and then on to the factory. The sheer amount of data involved is amazing – in a race, each car will generate around half a megabyte per second – say a gigabyte and a half over the entire race. This data is logged on the car, but it is also transmitted, through a trackside wireless network, to the garage in the pits. This data is then used in real time by the garage team to inform the driver and to guide him on changes that he might make in his driving, although the rules forbid electronic feedback to modify the car electronics. Within the ECU, there may be a number of driver-selectable different mappings, balancing, say, fuel consumption and power. The garage might encourage the driver to use one of these to reduce fuel consumption. (Refuelling is currently not allowed.) The ECU data is also retransmitted to the factory, where it is analysed in detail to see where improvements can be made for the next race.

From Freescale’s point of view, car racing provides an interesting area for development. The company has been involved in automotive electronics from its very earliest days, when it was a part of Motorola, and it has a long history of developing processors and other automotive-targeted products. A particular milestone was passed in 1979, when the first engine management microcontrollers were introduced to meet the developing pressure for cleaner air. Within automotive, the design-in time for a processor is long, and its product life is also long, with a 15-year guaranteed availability being standard for Freescale. (The long design-in cycle is why Freescale used the McLaren visit to announce the MPC 5746 Qorivva multi-core MCU, a four-core Power Architecture unit that will finally tape-out next year and not be available in volume until 2014. The next year will be spent finalising the details of the design with the automotive industry.) This, it is hoped, will continue the huge numbers of units shipped – Freescale estimates that, in 2010, 50 million new cars had one or more Freescale MCUs.

By contrast, the racing community moves much faster, although the software is continually under revision and ships only tens of ECUs a year. Interestingly McLaren doesn’t use automotive processors for the ECUs, relying instead on processors designed for telecom base stations to provide the processing throughput that is needed for the precise requirements of optimal control of high performance racing engines.

As I mentioned earlier, McLaren is supplying not only to F1 but also to the two US racing series, IndyCar and NASCAR. The IndyCar contract has been in place for some years, but it was only this season that NASCAR abandoned carburettors for fuel injection. (When I first heard that, I also thought that it was strange.)

Although it is at arms-length from the racing team, McLaren Electronics Systems shares the brand new Technology Centre with other elements of McLaren, including the racing team. The racing team has a series of bays that are visible from the open circulation area. The racing cars hadn’t returned from the Bahrain Grand Prix, and if it weren’t for the presence of a reserve car, you would have been hard pressed to know that these shining white areas were the service bays for cars.  They seemed to be more like the experimental cooking area for a food company, or similar, only cleaner, and the centre as a whole, and the staff working in it, were all beyond neat and tidy. (Even the visiting editors looked neater than usual.)

The electronics area was spotless, but watching the staff working on the new units, they seemed more like old-fashioned craftsmen, albeit working to very high tolerances, than part of the 2012 electronics age – even the volumes of product produced are measured in tens – not in tens of millions. A strange sight in the squeaky-clean workshop area was a shelf full of alternators, clearly not new. McLaren explained that, through hand winding, the performance of an alternator can be improved, while the weight can be reduced by a kilo or more. The shelf contained alternators due to be rewound, and, through a window, we saw the hand wiring taking place, just as it would have a hundred years ago for dynamos.

What we didn’t see was the new factory building road-going cars – the MP4-12C. For only £168,000 ($270,000 – base price) you get a just under 600hp beast, reportedly with a top speed of 205mph, 0-62mph in 3.3 seconds, and a standing quarter mile in 10.9 seconds. It features many things from different generations of F1, including a carbon-fibre body cell. But most interesting (and scary) is the seamless shift gearbox, where the next gear is engaged before the current one is disengaged, all in fractions of a second.

While the excesses and controversies of F1 and the other race series are sometimes a bit hard to swallow, racing provides a stimulus, but not the only stimulus, to mainstream automotive engineering. And it is fun to see the way they are making the toys work.

One thought on “Racing Electronics”