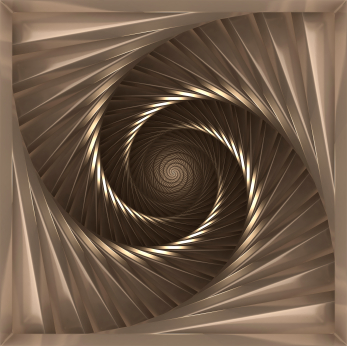 CEVA recently announced the XC-4000 family, their next generation of DSP processors for software-defined radio implementations of communications functions (if I may make bold to understate with the word “function”)

Normally, to discuss the new family, it would be standard to go through the processors and instructions and memory and bus architecture and… well, you’ve probably seen it all before. Perhaps not specifically done the way the XC-4000 – or any other particular processor – does it, but, well, it can be hard to craft a compelling narrative out of the usual “speeds and feeds.”

What kept grabbing my attention, however, is what they see going on as different wireless communications channels and media converge. It’s tempting to dip into the various technologies to learn more about them, but you take one step and are immediately slammed with enormous, mind-numbing complexity. And that’s with just a single technology. Put them all together and… well… it’s amazing that anything works at all.

So I thought it would be interesting to walk through some of this at a high level. Believe me, I’m not prepared to go particularly deep without a new PhD or two to get me there. And I’ll warn you that the alphanumeric soup will get thick. Standards buzzphrases are tossed about like four-letter epithets in the cheap seats of a baseball game.

So let’s take a walk through some of this and see where we end up. We may need to notify someone of when we think we’ll be back in case we get lost and don’t get back by beerdinner.

CEVA’s view on the converged wireless infrastructure in the near term can be summarized in the following outline:

There… that wasn’t so bad as a start, was it?

Let’s probe a bit deeper. LTE is one of those unfortunately-named technologies presumably dubbed by short-term thinkers that perceive a year to be a long time. “Long-Term Evolution” lasted about as long as it took to realize that they pretty much immediately needed something even longer term, LTE-A – toss “Advanced” on the end. LTE is a 3G technology that gets marketed as 4G in the US and as 3G in Europe; LTE-A qualifies as 4G around the globe.

The main barrier to being considered 4G is speed: the target for true 4G is 100 Mbps for high-speed units (like a train) and 1 Gbps for low-speed units (like a pedestrian). The other big distinction is that 3G and prior technologies use circuit-switched technology for voice; 4G is all packet-switched. LTE provides a transitional step (which is why there hasn’t been too much grumbling about it being considered 4G).

HSPA+ is “evolved” high-speed packet access. (Not sure what comes after that… super-evolved? Evolved-advanced? Evolved++?) It brings the data portion of what’s coming over the phone up to speeds more compatible with LTE.

WiMAX… well, I got a surprise here. I’ve always assumed that the “Wi” was the same as that in “WiFi” – Wireless. As in, “WiFi to the MAX” or something like that. Nope: officially, it’s “Worldwide Interoperability for Microwave Access.” Or maybe that should be “AXess.” For most of us, it still seems like, well, wide-area WiFi. Although, in many parts of the world where there is less copper buried in the ground (refined copper, that is, not copper ore), it’s also used for cellular backhaul.

We all know what WiFi is. “n” is faster than the older “g” and prior letters (not sure what happened to “h, I, j, k, and elemeno…” Oh, wait, that would be “elem”…) And somehow we’ve rocketed forward from “n” to “ac” as the next upcoming speed. More on that in a moment.

WhiteSpace is an interesting one. We’ve got entire bands of frequency dedicated to radio and TV, but, in any one market, much of that goes unused, partly due to few channels or stations, but also because you can’t put two channels too close together or they’ll bleed into each other. So the idea with WhiteSpace (which refers to these unused gaps) is to exploit all this available bandwidth for communication. Of course, exactly which parts of the spectrum can be used will vary by territory.

WiFi Direct is a standard for connecting two WiFi devices directly, without going through an intervening access point or router. It makes it easier, for instance, to print something from your smartphone: the phone can negotiate directly with a wireless-enabled printer; one of them takes the role of access point, and the setup can happen transparently to the user.

We all know BlueTooth; it’s a wireless technology created to allow sane people to walk down the street talking to themselves like crazy people, thereby warding off would-be muggers.

UWB stands for “ultra-wideband.” (Hopefully we never come up with anything wider; I’m not sure what’s more than “ultra”… “hyper”?)  This is a general technology that pulses information across a very wide bandwidth. Unlike frequency hopping, where you jump on a frequency and then jump away before the other guy can figure out who you are, this is – or can be – more like whispering in the background. It’s less susceptible to multipath fading (where destructive interference from multiple reflections of the signal weakens the signal), but it still has to deal with collisions between the information contained in more than one signal (whether different signals outright or different paths of the same signal).Wireless USB was implemented over UWB.

Now… what happens if we take a closer look at what’s inside various boxes, as envisioned by CEVA? We get more buzzwords, which we can summarize in the following table. 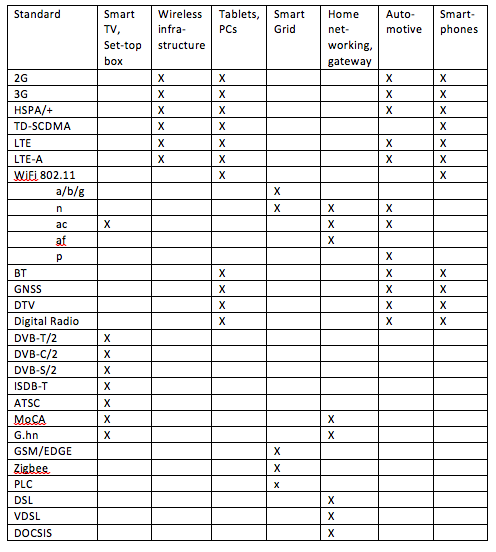 There’s some familiar stuff in here and some less so.

OK. Switching back to English, let’s review. Each of the systems in the columns of the table has to implement some combination of these standards. Is that a hard thing?

Well, as an example, the concept of coding channels in order to have them mash each other up in flight and be discriminated correctly once received always struck me as non-trivial, but we seem to have gotten the hang of it.

But with each new idea, each “evolution” of a particular standard, we seem to add more stuff. Which, I guess, is a good way to approach it, rather than coming up with it all at once. These new ideas can provide new features or, more likely, help to overcome prior barriers to even higher performance.

The CEVA XC-4000 family has some specific accelerators – which they call “tightly-coupled extensions,” or TCEs. I took a peek at what some of them were for. They provide a tiny bit of insight into some of what goes on in the phones.

One is for “multidimensional ML decoding.” I went to investigate what that might be. Just take one look at the Wikipedia page for “decoding methods.” English anyone? “ML decoding” is “maximum likelihood” decoding. Sorry, for those of you for whom this is obvious, but for the rest of us, this has to do with encoding message x as y so that when it’s received, it has the greatest likelihood of being decoded correctly as x.

Now come on… as Americans, we know that if something we say doesn’t come through or sounds foreign to the receiver, the solution is simple: TALK LOUDER. What’s all this probability mumbo-jumbo? Seriously, though, it’s a bit daunting to realize that getting something from here to there intact involves some less-than-obvious math.

The next one is time/frequency domain transformation. OK, that’s reasonably accessible. I only wish I’d had that during some of my EE finals…

And then there’s a fully-programmable despreader. We might hope that this will help us to stay in better shape in our later years, but… I don’t think so. For reversing the spreading of the signal across frequencies when received. Clear enough.

Finally, there’s one for SIC in the largest devices. This stands for Successive Interference Cancellation. And it refers in general to being able to receive two channels simultaneously rather than extracting just one from the noise. The basic approach is to decode the strongest signal, then subtract it from the total to see what else is buried in there. Sounds simple; apparently isn’t.

They even have instructions specifically for supporting multiple-in/multiple-out, or MIMO, technology. That’s sending the signal from more than one antenna and then receiving it on more than one antenna. Also known as diversity. We looked at some MIMO testing issues before. This uses a lot of complex (not just hard, but involving complex numbers) math, enough to justify its own instructions.

The reason I bring these up is that they’re but a few examples of bits of complicated technology that do only one small piece of what has to happen for an entire communication standard to work. It can be mind-boggling to think of the sum total of the algorithms and their underlying theoretical concepts that are put to use each time we utter, “Can you hear me now?” (Or, all too often, “Are you there?” Oh, wait, no, that’s what happens when the algorithms and such don’t work…)

Call me naïve or unsophisticated, but it kinda freaks me out just thinking about it.

(CEVA will probably be disappointed that I talked about all this silly stuff that they take for granted rather than dedicating the space to a discussion of, oh, the power-saving stuff they’ve worked so hard on… Sorry guys… I blame it on numb synapses…)

One thought on “Numbing It Down”