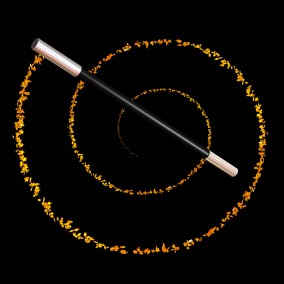 The EPIC Sensor Hits the Market
by Bryon Moyer

It’s the stuff of kids’ play and science fiction. A stick that has magic properties. Some such sticks execute actions at a distance – perhaps when accompanied by a cryptic incantation – while others may passively detect from a distance. It’s the latter we’re interested in today.

We are surrounded by information encoded into the electromagnetic ether through which we pass. Some of it is natural; some of it we have created ourselves. But here’s the thing that may be surprising: when we measure things electromagnetic, we’re pretty good at the magnetic part. Heck, a 50-cent compass can pick up the earth’s relatively weak magnetic field. We’re not so good at the electric part, however.

Turns out that detecting and measuring electric fields accurately has been the realm of slow, big, lumbering machines that need as much frequent recalibration as a high-maintenance in-law. And, apparently, it’s something that no one has focused on that much.

Recently, however, a project at the University of Sussex resulted in what they called the Electric Potential Sensor, or EPS. And, by their description, it’s as close as you can get to a perfect voltmeter. (Or is that voltmetre?)

Unlike many of the sensors we talk about here, this doesn’t seem to be something that exploits some cool physical phenomenon. Nor is it a MEMS contraption. It seems simply to be a matter of circuit design and careful guarding, using techniques that they claim to have patented. In fact, the Sussex folks have licensed the technology to Plessey; Plessey is making a solid-state version of the sensor, which they’re calling the Electric Potential Integrated Circuit, or EPIC. More commonly simply called the EPIC sensor.

It’s said that there’s a fine line between genius and madness. You teeter on the edge of chaos and somehow, from that precipitous position, manage to glean wondrous things that aren’t available to most folks (to the point that some of them will call you crazy anyway). That delicate balance appears to be what makes the sensor work. While there’s not much detailed information available, they say that positive feedback and careful guarding keep the circuit just on the edge of instability. This makes it extraordinarily sensitive. The natural electric field near earth’s surface is about 100 V/m, yet this thing can detect disturbances in that field with millivolt sensitivity.

The sensor can be used in close proximity to the item being measured or it can be used more remotely. Even if in contact with the subject, however, there is no electrical connection: the probe is protected by a dielectric that gives the unit very high input resistance and very low input capacitance. They say that further bootstrap and guarding techniques can take the input resistance as high as 1015 Ω and the input capacitance as low as 10-17 F.

Which is why they characterize this thing as a near-perfect voltmeter; it has almost no interaction with the subject it’s measuring. There’s a small displacement current as it detects variations in the field, but because of the high impedance, it practically doesn’t interact with the field at all. Take that Heisenberg*!

It can also be used differentially or single-endedly. In differential mode you can read a local electric field; a single-ended unit can measure electric potential. And these guys are building arrays of these things, with which they can discern more elaborate spatial patterns.

It’s refreshing to see this kind of raw new element; you can practically see these guys sitting around the table dreaming up what can be done with it. By far, the most common applications they mention are medical. All the “E” things: EEG, ECG/EKG, EOG, EMG. Obviously we have EEGs and ECGs today, but this makes it easier to use because you can do without close contact, and, even if you contact the patient, you don’t need any gels to improve the signal. And EEGs may be much more sensitive, raising the promise/specter of decoded thought patterns.

EOG and EMG may be less familiar. EOG is electrooculography – it measures the minute movements that your eye makes. This has application in such things as eye-tracking for gaming and man-machine interfaces for quadriplegics. EMG is electromyography – the measurement of the small electrical signals in muscles. One application of this is to detect specific muscle signatures to use for controlling artificial limbs.

Moving outside the human body, this thing can detect the human body. Or any body. We’re largely water, so we have a ready impact on our local electric field. The sensor can detect small movements, although it cannot detect the direction of the movements. In a border security application, for example, it can detect someone or something at the perimeter. The pattern it sends relates to the gait of the approaching body, helping to distinguish animals from humans.

Another highly touted application is the ability of firemen to detect a body in an adjacent room. This would be harder if the wall had metal studs or chicken-wire for lath-and-plaster, but, in many cases – probably most cases – search and rescue operations could be completed much more efficiently, with less time wasted in rooms where there are no victims.

Very small probes can be used to track currents in an IC – or in any circuit where the electric fields are unshielded. And these things can also detect fingerprints non-destructively, with no dusty residue; it’s a completely non-invasive technique.

It would seem that the biggest consideration in exploring new applications is more about the physical arrangement of the probe – big, small, singleton, array, etc. – than it is about the circuit itself. They’ve had a demonstration unit out for a while that would allow you to hook up the probe to an oscilloscope or even turn your PC into an oscilloscope. But, clearly, some new applications will require a custom form-factor.

There has been a fair bit of noise about this over the last year or so. Plessey licensed the technology late in 2010 and announced samples late in 2011. They have just announced commercial availability.

So now you can start imagining all the things your kids will want for Christmas. Just be glad that these are simply detectors; the only havoc created will be from the kids themselves, not from sparks or smoke issuing from the tip of the stick they’re waving around.

*I know, I know, I’m totally abusing the Heisenberg Principle. Work with me… it’s a joke…

Note:  As of this writing, the Plessey website doesn’t seem to have been updated to indicate commercial availability, but one of their North American distributors, Saelig, issued a release announcing they’ve got them for sale.

One thought on “A Passive Magic Wand”