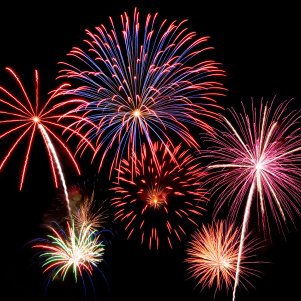 Happy Birthday, the United States of America. How does it feel to be 235? You really have done well since you took the training wheels off and started riding your bicycle by yourself.

Many societies have what historians call “Foundation Myths” – stories that explain how a community was established. Some myths explain societies through the acts of gods, others through the actions of people, either imaginary or real people. For example, the founding myth of the City of Rome was that twins, Romulus and Remus, who were brought up by a she-wolf, founded the city that was the heart of the Roman Empire.

An extreme example of the foundation myth of the United States is in the simplicities of films like Mel Gibson’s The Patriot. In fact, the American Revolution was complex. In the colonies, there was a very wide mix of nationalities, and whatever source you look at suggests that the “patriots” were never a majority: even the most enthusiastic historian today will rarely go above 40% of the population as supporting the revolution. And, while nothing can detract from the efforts of the Continental Army, they would not have succeeded without significant help from the tyrants ruling Spain and France. They backed the colonies with arms, soldiers and advisers, not through a love of freedom or admiration of republicanism but as a way of trying to keep Britain in check.

At the same time, there was strong support for the colonists within England. The taxes in the colonies were also, on the whole, taxes in England, an England that was under the thrall of what later became known as the Old Corruption. The same radical elements in England, who, ten years later, welcomed the French Revolution, also welcomed the American Revolution.

As an English baby-boomer, I grew up in the shadow of American hegemony during the height of the Cold War. Since then, in the last thirty years, I have travelled to the United States around 100 times, while working for companies with American operations, for American companies, and, as a journalist, to report on technology developments. (To modify that slightly, the first time I was travelling to Chicago someone explained that, as I had at that stage visited only Colorado, Silicon Valley and Manhattan, “You ain’t visited America, son.” And even though I have now been to San Diego, Las Vegas, New Orleans, Portland, Oregon, and a suburb of Chicago, I think he would still feel the same way.) What follows is not a reasoned critique of the United States, but a series of snapshots that reflect my admiration of, and occasional irritation by, the country.

One thing that is a regular comment is that, “We are a young country.” That may, in some senses, be true, but the American Government is the second-longest continuous government in the world. It was Alistair Cooke who said that, in his wonderful TV series on America. He also commented that one of the drivers that pushed colonists westward was the hard terrain of the East Coast, particularly in the New England states. He speculated whether, if the initial colonies had been in California, there would have been such a strong push eastward, across the western mountains and deserts.

I am in awe of some of your academic system. There were nine universities in the colonies on the eve of the revolution: at the same time in England there were only two, teaching in a very desultory fashion topics that were old-fashioned, even by the standards of the time. In Scotland there were four, and they were much more energetic and relevant. As the pioneers moved out from the eastern seaboard – filling the great gap between sea and shining sea – so education went with it. Even the smallest settlements would try to set up some sort of school, and larger settlements established colleges. The level of literacy in the US in the nineteenth century was a wonder to all the European visitors.

But alongside this has run, since the very earliest days, a cultivation of anti-intellectualism: it has always been a badge of masculinity to be down to earth, disdaining fancy manners, speaking bluntly and wearing ordinary origins as a badge of pride. This is not, in itself, necessarily a bad thing. But when it affects life to the point that there is a feeling that the public will not trust someone who does not carry those badges of pride, so that a president who has attended an exclusive prep school and then two Ivy League universities feels it essential to position himself as a good ol’ Texas boy, might it have gone too far?

This tension between the educated and those who stand against education has been a regular theme through the development of industry and technology. The ingenuity of the Yankee tinkerer is a thread in the American myth that has grown with the telling, while the development of excellent academic teaching and research into science and technology has not attracted the same interest.

In addition to academic research, one of the great US successes was the in-house research unit, starting with Edison’s Menlo Park Labs in New Jersey, and including Bell Labs in its prime and the IBM Research Labs. This level of in-house work on a variety of topics, including blue-sky work, has never really been matched elsewhere, where the concentration has usually been on R & D, with the Development being at least as important as the Research.

And from the Yankee tinkerers, the universities, and the in-house labs have come some wonderful things. But not everything: the simplicities of foundation myths have worked here. For example, in August, 1940, when Britain was in danger of invasion, and before the USA and Russia had joined the war, a group of British scientists took to Washington a briefcase that contained the technological equivalent of the British crown jewels. They included the cavity magnetron (the key to airborne radar), as well as material on atomic research, and even basic information on the jet engine. These seeds fell on the fertile ground of the US and grew rapidly. (I have been told, but cannot verify, that some of Turing’s unpublished work on computers was in the same briefcase.)

Looking at our own industry, whose roots are in the wartime period — while it is clear that the huge leaps forward were funded, directly or indirectly, by the military in the US, the main stream of creativity was fed by side streams from Europe. The 1930s work of the German, Konrad Zeus, was known in the 1940s by the US developers of the first, relay-based, computers.  The first practical implementations of the von Neumann architecture were in Manchester and Cambridge Universities in England. The first computer for use in the commercial, as opposed to the academic or military, environment was the LEO (Lyons Electronic Office) in London in 1951. The very first description of an integrated circuit, combining transistors in a single substrate, was in 1952, in Washington DC, by a British government scientist (Geoffrey Dummer), and it is likely that Kilby knew of the paper. The Internet, brought to full effect initially in the US, was the result of work in England and France, as well as in the US. The World Wide Web was thought up by a Brit working in the international research facility at CERN in Switzerland, although the American computer pioneer, Vannever Bush, had sketched something similar to the web and Google in 1945.

Today, the way in which technology-based products reach industrial or consumer markets is increasingly international. Components designed in the US and manufactured in India are built into products designed in Europe and assembled in China for sale around the world. In this scenario, the US plays a pivotal role, and this is recognised by the engineers from many different nationalities that are building companies with US offices to draw on the growing research from elsewhere. Off the top of my head, I can think of the long established work in Israel, in the growing strength of what we used to call Eastern Europe, and in India and China. (And in Britain, France, Germany, Italy, and Spain.)

So while the US is no longer the great big beast in the electronics jungle, it is still important and will continue to be so. Yet another cause for celebration on July 4th.

Your founding fathers had strong vision on the function of a society. Thomas Jefferson said, “A society that will trade a little liberty for a little order will lose both, and deserve neither.” This is something that springs to mind when I see yet another erosion of individual liberties in the name of national security. The separation of the state and religion was not a matter of convenience for the founders, but a matter of deep belief. Jefferson said “But it does me no injury for my neighbor to say there are twenty gods or no God. It neither picks my pocket nor breaks my leg.” And John Adams, second president, said, “The government of the United States is not in any sense founded upon the Christian religion.”

The ideals of the revolution, even with the temporising over slavery, which had such dreadful consequences nearly a hundred years later, are still something to be admired. The penetration of democracy to the lowest levels of social organisation, the election of many local officers, and the determined independence of local cities, is still admirable in principle, even if the practice sometimes falls woefully short. The way in which successive waves of immigrants still grasp the opportunities of education to build successful lives, at least for their children, is nothing less than breath-taking.

A country that enshrined free speech into its constitution is to be eternally admired: yet free speech can be, as we see every day on the net, a license for bigotry, hatred and ignorance. And while today there are groups who, for their own purposes, seem determined to create divisions in the fabric of US society that could be as dangerous as those created in the run up to the Civil War, there are also many, many people of goodwill who are determined to stop this happening.

To The United States of America, with all your weaknesses and your many strengths — you are still worth celebrating – so “Happy Fourth of July.”