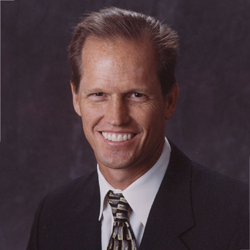 Darin Billerbeck looks out of place and restless in the dark, heavy, ostentatious ambiance of Lattice Semiconductor’s boardroom.  Like a well-trained athlete donning his grandfather’s hat and cane, his energy bursts through the seams – fighting with the oppressive atmosphere that echoes the values of his predecessors.  Lattice was once a house of hierarchy – a top-down, micro-managed, dictatorship where blame flowed downward and credit upward.

Today, the baroque trappings of the company’s tumultuous past are being cleared to make way for a cleaner, more welcoming future.  Pieces of art that adorned the hallways as silent reminders to the passers-by that they were in the presence of power far greater than their own are being sold off – and ping-pong tables and discussion lounges are appearing in their place.  Lattice is undergoing a cultural transformation of epic proportions, and evidence is everywhere you look.

The work environment isn’t the only thing changing under Billerbeck’s watchful eye.  Decision-making is being pushed down into the rank and file – to the lowest levels that have both the confidence and the knowledge to execute them well.  “If you have 80% of the information you need to make a decision, I don’t need you,” Billerbeck quips.  “If you have 30%, I don’t want you.”  This empowerment of the employees appears – from the outside, at least – to be a new thing at Lattice.  One that would not have been in evidence even a couple of years ago.  Today’s team seems to spend a lot more time looking outside the company at the customers and competition, rather than upstairs to the executive suites for guidance.

Darin Billerbeck took the helm at Lattice as President and CEO last October.  In addition to an impressive resume of semiconductor-industry experience, he brings a youthful but sophisticated energy to the management levels of the historically stodgy company.  Billerbeck served as President and CEO of Zilog from 2007 to last year, and before that he spent 18 years at Intel in various executive and management roles.

In just his first few months, Billerbeck has put a sharp edge on Lattice’s strategy.  When talking with him, It becomes immediately clear that he is a hard-core semiconductor guy.  Years of battling in the trenches of the volatile memory market have equipped him with a savvy perspective on treading the trail between commodity semiconductor and esoteric bleeding-edge technology.  He seems to see Lattice as what it is – a fast follower in the FPGA market whose competitive differentiators come not from being the first on a new technology node, but from cleverly positioning products where they will take healthy bites out of larger competitors’ profits.

This is not to say that Lattice doesn’t innovate.  They do.  In fact, Lattice basically created the “mid-range” FPGA category that both Xilinx and Altera have now adopted.  When Lattice rolled out the first low-cost FPGA with high-speed serial interfaces, they sent their larger competitors into a spin, trying to rapidly re-define the line between their expensive, high-end FPGAs with SerDes and their market-saturating low-cost FPGAs with conventional IO.  Lattice has consistently looked at profitable market segments, designed better mouse traps specifically for those segments, and quietly raised victory flags over numerous applications in whose small ponds they had suddenly become the big fish.

Billerbeck hasn’t driven to work yet at Lattice – preferring mass transit or, weather permitting, his bike.  When we arrived, he was having a conversation with a colleague about road bikes.  After a brief back and forth about the relative merits of carbon fiber versus titanuim for bicycle frames, it was time to get down to FPGAs.  Although we typically think of Lattice as one of the smaller players in the programmable logic market, Lattice has sold over one billion programmable devices in the past ten years.  Most of these, of course, are CPLDs or low-end FPGAs.  “Lattice will be competing with low power, low cost, and innovation,” Billerbeck begins.

Lattice is competitive in mid-range and low-cost FPGAs and in mixed-signal board management components.  Their ECP3 FPGAs are derived from one of the first products of their foundry relationship with Fujitsu several years ago.  Lattice aims directly at the big-guys’ breadbasket with ECP3, delivering significant power savings and low device prices in the modest 100K LUT range, and winning significant sockets in the comms space.  Instead of focusing on blistering double-digit gigabit SerDes, the company delivers 3Gbps SerDes in wire-bond packages at lower prices, capturing some “here and now” market while their competitors power the future.

Lattice’s “XP” FPGAs have always held a unique spot in the market with their mix of speed and non-volatile operation.  On-board flash configuration memory lets XP (and now XP2) FPGAs configure themselves without external configuration circuitry, but operate at SRAM speeds – unlike pure-flash non-volatile FPGAs.  Compared with antifuse non-volatile devices, XP is re-programmable, making it appropriate for a wide variety of applications where other non-volatile technologies won’t fit.

Lattice’s CPLDs have always been a mainstay of the company’s line – with high-volume orders of low-cost, low-power devices quietly going into mass-produced consumer devices of every shape, size, and type.  While the CPLD market offers little glamour, it has sustained the company through tough times and serves an important role as bridging logic and system management in a wide range of systems.

Speaking of system management, Lattice has been quite successful recently with programmable-logic-based system management devices that integrate a number of commonly required functions for embedded systems into a single chip.  In this role, you’ll often see a Lattice device parked right next to a competitor’s FPGA on a board.  Lattice doesn’t mind.  The competitor might.

Billerbeck took the helm at a time of extreme transition and turnaround for Lattice.  Somehow, the company managed to navigate the tumultuous waters of economic downturns, executive controversy, competitive pressure, and the shifting winds of the programmable logic market – and come out the other side alive and intact.  Now, the financials have turned healthy – with revenues significantly up and competitive products in several key areas.

Where is the company headed next?  “We expect to grow faster than the market,” explains Billerbeck.  The company says they will continue to grow their share in the markets where they’ve enjoyed recent success – mid-range FPGA, low-cost programmable logic, and system management.  “We won’t be the first company on a new process node,” Billerbeck continues.  “We’ll be following by a few months with competitive products that cost less and use less power.”

While we often think of the communications market as the purview of the big 2 FPGA companies, that segment has always been an important revenue generator for Lattice as well.  The company also expects big things from the computing, industrial, and automotive areas, as well as a continued stream of small, cheap parts for consumer devices.

While Billerbeck is a dyed-in-the-wool semiconductor guy, the importance of tools and IP in the programmable logic market are not lost on him.  The first strategic priority in his CEO presentation is “Transformation from FPGAs to programmable SoC platforms,” which includes the IP and tool components one would expect, along with an intriguing “multi-chip packaging for rapid prototyping and delivery of SoC solutions.”  This might imply that we could see partnered solutions from Lattice that resemble Intel’s “stellarton” hybrid of an Atom processor in the same package with an Altera Arria FPGA.

There are a number of challenges in Lattice’s immediate future.  The company needs to identify a strategy and a supplier for the next process node or risk falling too far behind the big two to slipstream with improved efficiency.  However, Billerbeck’s pragmatic and people-oriented leadership style seems a perfect match for the challenge, as well as offering a complete departure from Lattice’s less-than-comfortable management legacy.